Can a Higgs boson decay into dark matter?

I've a couple of questions around the title, all closely related.

Assuming dark matter is composed of particles outside of the standard model, is it possible that a Higgs could decay into some dark matter particle?

If true, when running experiments related to Higgs production, do the detection mechanisms (physical/mathematical models/etc) in the LHC have the accuracy to detect the shortfall in detected(vs expected) standard model decay products, if the dark matter decay occurred?

Which finally leads me to ask, if true, has any reasonable discrepancy been noticed that deviates from the models?

Depending on what quanta dark matter truly is made of, the Higgs boson may or may not be able to decay into those quanta. Being further nit-picky, at colliders, where the Higgs boson can be studied, dark matter may or may not be produced, the collider experiment will never be able to tell whether a new particle has a long enough lifetime to be the cosmological dark matter. One thus typically refers to such decays as "Higgs to invisible". This avoids the reference to dark matter and would be the right buzz words to use in an internet search.

Yes, there are many dark matter candidates that the Higgs could decay into, yes, experiments at colliders could be able to detect such events, but current searches have not come up with significant discrepancies.

This paper from the CMS collaboration is a nice example to illustrate these points. Their Figure 1 shows some example Feynman diagrams where the Higgs ("H") decays into invisible particles (invisible in CMS, labeled $\chi$) that might be dark matter:

They go on and search their data for such events. Figure 6 from that paper shows what they find: 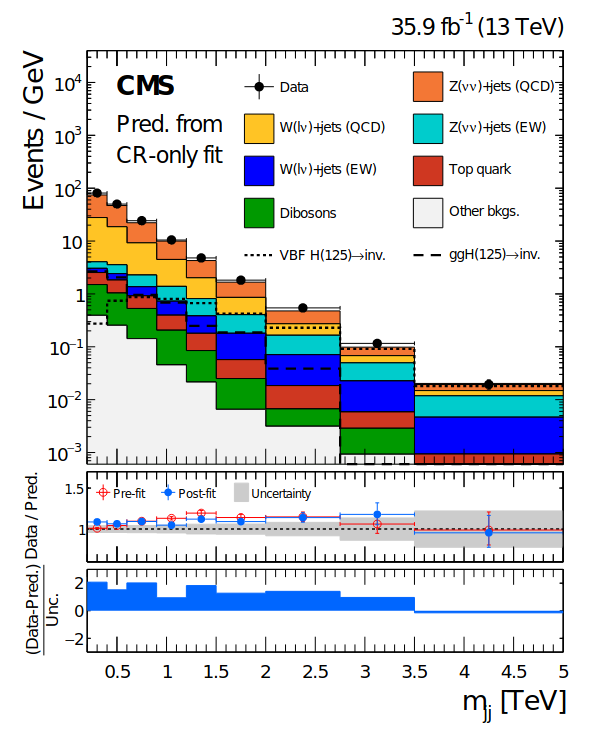 Not the answer you're looking for? Browse other questions tagged higgs dark-matter or ask your own question.

18
Dark matter and SO(10) grand unification
5
Is cold dark matter made of Higgs bosons?
12
Could the dark matter sector be boring?
6
Which cosmological dark matter theory is most compatible with current particle physics?
3
Dark matter mass and weak interactions
5
Why is the Standard model Higgs not a candidate of dark matter (in particular, a WIMP)?
30
Why is Anti-helium so important in the search for dark matter?
0
What crystals are being used in this project to detect dark matter?
3
Why don't cosmological observations tightly constrain cross-sections for direct detection of dark matter?
2
Is there a way to determine the production method of a Higgs boson created via collisions in the LHC?