Proof that the Earth rotates?

What is the proof, without leaving the Earth, and involving only basic physics, that the earth rotates around its axis?

By basic physics I mean the physics that the early physicists must've used to deduce that it rotates, not relativity.

The Foucault pendulum is a great experiment which does demonstrate that the Earth is rotating, but it was only introduced in 1851. The Earth had been known to rotate for several centuries before that, probably stimulated by Copernicus and Galileo pushing the heliocentric model of the solar system during the 16th century.

A couple of decades before Faucalt's pendulum, the Coriolis effect was discovered. This effects (among other similarly large systems) hurricanes, causing them to rotate clockwise/anti clockwise depending on whether they're in the southern/northern hemisphere. It is an apparent force that appears in any rotating frame of reference (like a spinning planet). This again won't have helped early 'spinning-Earth' believers.

Early evidence that the Earth rotates was almost certainly the observation of the sun, planets and stars moving across the sky and then, with the help of telescopes, of the other planets also rotating. Of course this requires you to trust that the Earth is not the centre of the universe and so doesn't "prove" the Earth is spinning in the same way as observation of Foucault's pendulum or the Coriolis effect.

The idea of a "proof" in physics is a difficult one. A theory such as the 'spinning-Earth' will at first simply be presented to explain anomalous observations that current theories can't (such as why do the other planets and the sun move independently of the background stars if everything rotates together around the Earth?). It then gets tested by experiments inspired or predicted by the theory (if the Earth is spinning, what should we expect to observe?). If everything holds up, it's accepted as fact. Eventually, some bright spark realises he/she can demonstrate that the Earth is rotating with a clever little experiment (Foucault's pendulum/Coriolis effect/launching a rocket into space) and it is added to the mountain of evidence already accumulated on the subject.

Foucault pendulum. I don't know how the ancients did it, but it is surely pure classical mechanics.

The animation describes the motion of a Foucault Pendulum at a latitude of 30°N.

I think the Foucault pendulum is the best answer, but for the sake of variety I'll add another very interesting one: the equatorial bulge affecting the figure of the Earth. This is the "pancaking" of the planet due to its rotation. You can measure the geometry of the Earth without leaving its surface, and find that it is bulging in accord with your expectations if that bulge were caused by rotation at the same rate as the one we observe relative to distant stars. As always, there's no such thing as "proof" in physics, but this is strong supporting evidence.

An indirect indication that the Earth rotates is the fact that the rotation varies over time. First of all, the orientation of the Earth's axis changes: long-term effects like precession and slow variations in the axial tilt, as well as small short-term variations like nutation. Precession was already known in the Ancient world (Hipparchus, Ptolemy,...) and the change in axial tilt was recognized by people like Fracastoro (in 1538). See the wiki pages for historic background.

The Earth's period of rotation also changes. First of all, the rotation is slowing down, caused by the tidal interaction between the Earth and the Moon: the length of the day increases by about 2 milliseconds per century. Edmond Halley was the first to notice that the orbital period of the Moon had changed compared with ancient records, and the effect was explained in the 18th and 19th century.

These days, we're able to measure the Earth's rotation very precisely, and we find that the rotation varies slightly from day to day. In particular, changes in the atmospheric winds and oceanic currents cause periodic fluctuations in the axial tilt and the period of rotation: an annual fluctuation with an amplitude of 0.34 milliseconds, a semiannual period with an amplitude of 0.29 milliseconds, 10-day fluctuations of the order of 0.1 milliseconds, fluctuations due to El Niño events, etc (see wikipedia, and also this post). Large earthquakes can also change the rotation period by a few microseconds, but these effects prove difficult to measure (see this article on the 2011 Japan earthquake).

Do these variations prove that the Earth rotates? Not directly, but I'd like to hear geocentrists explain how the entire universe can change its rotation, not only over thousands of years but even on a daily basis, when the causes of these variations can be traced back to events on Earth or its orbit.

Another proof that the Earth rotates, although it can only be measured with modern techniques: aberration.

You're all familiar with this effect: suppose that you're standing in the rain, and there's no wind. Since the rain will fall vertically, you have to hold your umbrella straight up. But now start running. What happens? From your point of view, the rain will no longer fall vertically: you have to tilt your umbrella forward to keep your head dry. A similar phenomenon happens with light: the direction in which you see a beam of light depends on your velocity. This effect is called aberration. 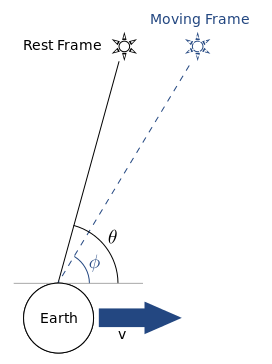 For instance, suppose you have two stars, separated by an angle $\theta$ in a rest frame. If an observer is moving towards the star on the horizontal axis, then he will see the second star at an angle $\varphi$, instead of $\theta$. If the velocity of the observer changes, then the angle $\varphi$ changes, and the star will appear to 'wobble' with respect to stars at different positions.

The orbital velocity $v\approx 30\;\text{km/s}$ of the Earth around the Sun causes an annual aberration: over the period of a year, every star and galaxy will appear to wobble on an ellipse, with a maximum displacement of $v/c\approx 20.5''$ around their mean position, regardless of their distance to the Earth (unlike parallax, which does depend on distance). It was first observed by James Bradley in 1725, and is direct proof that the Earth orbits the Sun.

But there's another, much smaller aberration: a diurnal aberration, caused by the rotation of the Earth around its axis. The effect is greatest for an observer on the equator, who has an equatorial speed of $v = 0.465\;\text{km/s}$, while an observer on the poles will see no effect. For an observer on the equator, the position of every star wobbles on a daily basis, with a maximum displacement of $v/c\approx 0.32''$. It's an incredibly small effect, but it is measurable, and it has to be taken into account when doing high-precision astrometry. Moreover, it proves that the Earth does rotate.

Anything related to the Coriolis effect (some pretty pictures can be found in the link), i.e. even cannons will be (not precisely, rather seem) deflected because of the earth's rotation.

Measuring the geometry of the earth, we find that it has an equatorial bulge. We make no assumptions about the cause of the bulge, though it suggests already that the earth is rotating as @Mike has described.

We measure the acceleration due to gravity at the poles and on the equator. Most of the difference we find is accounted for by the bulge, but there is a $0.3\%$ discrepancy. The acceleration due to gravity is smaller on the equator than we expect. This discrepancy is nicely explained by assuming the earth is rotating. In fact, making this assumption we can make a rough calculation of the period of the earth.

The Sagnac effect can detect absolute rotation. This is used, for example in the ring laser gyroscope used on modern aircraft as navigational devices. Not only is it possible to use this effect to prove that the earth rotates but its precision for detecting variations in the rotation is starting to become competitive with the most precise techniques nowdays: see

Not the answer you're looking for? Browse other questions tagged newtonian-mechanics rotational-dynamics earth rotation inertial-frames or ask your own question.

9
How can we tell if the Earth is spinning without any external references?
0
What's a simple experiment to perform, near the equator, to show the rotation of the earth?
72
Why is the Earth so fat?
38
Does the sun rotate?
33
What is the Earth truly rotating about/revolving around?
7
Is the total mass of Earth's atmosphere essentially constant in time?
1
Argument for proving Earth-Centered Earth-Fixed (ECEF) reference frame is non-inertial
1
centrifugal force in static frame of reference

3
What exactly is the definition of motion and its relation to Mach's conjecture?
33
What is the Earth truly rotating about/revolving around?
1
Do particles rotate around themselves or they just move while the object rotates?
2
Why does the Earth rotate on its axis?
0
Explain the relative motion between two particles of a rotating rigid body
4
Earth's rotation in an empty universe
1
Why is the Earth not an inertial frame of reference?