Why is Helium-3 better than Deuterium for fusion energy production?

I see that many websites and magazines with physics thematic are pretty excited about mining Helium 3 isotope on the Moon. But this seems to be a very hard-to-get resource. For more than one reason:

Deuterium can be found in the seas as "heavy water". No spaceships needed.

Now even when we get the Helium-3, I have a strong suspicion that it contains less energy than Deuterium but it will require more energy to start the fusion.

Why I think it needs more initial energy to start the fusion?

Now the worst problem with fusion reaction is, that once you pull the atoms so close, that the electron shells no longer shield the polarity of the protons they start repelling with electric force. Now if you're trying to pull +1 and +1 together it seems much easier than pulling +2 and +2 together. Just think about the standard equation: $F_e = k*\frac{|Q_1*Q_2|}{r^2}$ where $k$ is the permittivity constant and $Q_{1,2}$ are the proton charges. Repelling force must be 4 times as large. 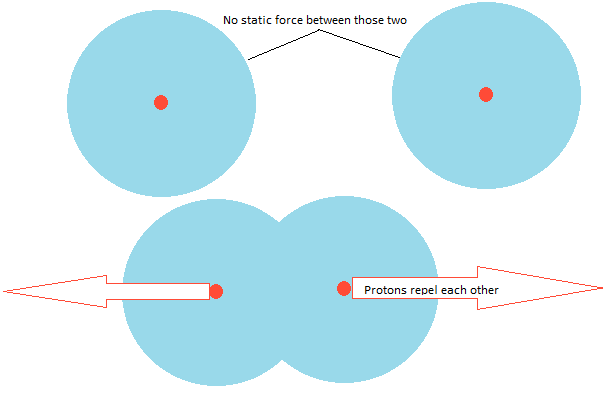 Why I think it contains less energy?

This is even simpler to explain. In the fusion process we merge smaller cores to create larger. We normally start with hydrogen and create helium. Now when we already have Helium fused, it means that we missed one step in the fusion. Why would we do that?
Can't actually Helium 3 core be one of cores that are created in Hydrogen fusion?

While D-He3 fusion reaction rate peaks at smaller energies than D-D (see this picture), and produce more energy (18MeV for D-He3 vs. 3-4MeV for D-D reaction), this is not the main reason why some people think He3 is a 'better' fuel. The main reason is that D-He3 fusion fuel cycle is aneutronic. That is, all fusion products (if we disregard auxiliary branches) are charged particles and there are no neutrons released in this reaction.

For more information read corresponding wiki page, but the main reasons neutrons are considered 'bad' in fusion are following:

Additionally, one half of D-D reactions produces radioactive tritium that either has to be 'burned', or stored.

All of this would be especially crucial in space, where shielding + turbines + radiators for excess heat will make D-D fuel less attractive then D-He3 if there is sufficient space industry to make He3 mining viable.

Nuclear physics often doesn't make sense without understanding the underlying quantum mechanics (and then, it often makes even less sense even though the numbers add up ;-)

In a nutshell, Deutrium is pretty stable compared to Helium-3. Helium-3 is more "desperate" to fill the missing neutron than Deutrium is to merge with a twin to form Helium.

In other words, you need less energy to make Helium-3 to fuse with Deuterium to form Helium + ionized Hydrogen pairs than to fuse Deuterium with itself into Helium.

Not the answer you're looking for? Browse other questions tagged nuclear-physics fusion nuclear-engineering or ask your own question.

16
Where does the energy produced by fusion come from?
5
Can we generate infinite energy by successive fission and fusion reactions?
2
Why is there such an interest in Helium-3 and Moon mining?
12
Is an H bomb a better "fusion reactor" than the Sun's core?
1
Why is the weak force the main limiting factor when it comes to the $p$-$p$ fusion chain, instead of the quantum tunnelling effect?
1
In fusion inside stars (sun) or very hot gasses, how do the electrons get bound and what about tritons and $D$-$T$ vs $D$-$D$ fusion?
0
Can we use tritium instead of helium-3 for nuclear fusion reactors?
1
Where do the Neutrons for fusing Hydrogen to Helium in the Sun come from?