Opposite of event horizon - causality horizon or sphere?

Is there an opposite of event horizon - let's call it causality horizon or causality sphere - past which current objects in space can never be influenced from Earth because of the accelerating expansion of space?

Is this horizon the same size for light and gravitational waves?

This is the Hubble sphere (sometimes also called sphere of causality, so your guess was correct). From Wikipedia:

In cosmology, a Hubble volume or Hubble sphere [...] is a spherical region of the observable universe surrounding an observer beyond which objects recede from that observer at a rate greater than the speed of light due to the expansion of the Universe. The Hubble volume is approximately equal to $10^{31}$ cubic light years.

One should note that this is not the same as the observable universe which has a radius of about 46.5 billion light years – much larger than the Hubble sphere. The reason that we can see farther than we could (theoretically) interact is that these objects emitted their light when they were closer (inside the Hubble sphere).

If I understand correctly, what you're referring to is the boundary of the Earth's current causal future, the set of all points that can be reached from Earth by a timelike or null curve (massive object or light signal). That is our future light cone, as shown in the figure below as the part of the light cone for time > now. Notice that when a galaxy at a particular comoving distance (denoted by the dotted line) crosses the event horizon, it also moves outside of our future light cone as expected. 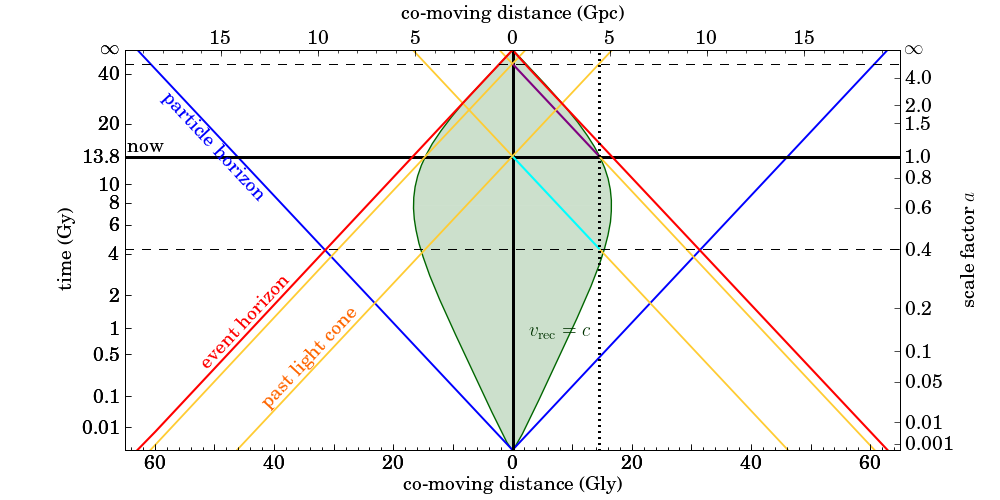 Not the answer you're looking for? Browse other questions tagged cosmology space-expansion event-horizon observable-universe or ask your own question.