What is the difference between buoyancy and buoyant force?

Edit: When someone mentions $F_B$ what should I assume? is it Buoyancy or Buoyant force?

Upward force should be the weight of the liquid displaced by object, where did pressure came from?

Mathematically the buoyant force is equal in magnitude to the weight of the displaced fluid, but that's not the main reason for buoyancy. If you had a container of water in deep space with no gravitational influence and you put an object in the water so that it displaces the water there would actually be no buoyant force.

One can show that because of this Archimedes principle holds, but it's just a consequence, not the reason behind the buoyant force.

The origin of the buoyant force is actually pressure difference. Think of a cylindrical object fully submerged vertically in a liquid in a gravitational field. 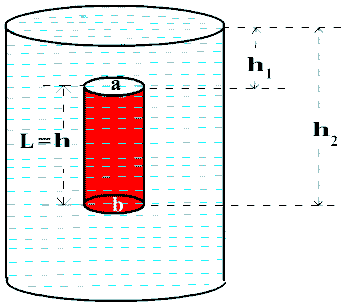 The liquid exerts pressure on the walls of the object. The force exerted by the liquid on the object is always perpendicular to the surface. The forces on the vertical surface cancel each horizontal force. But the upper and lower flat surfaces of the cylinder experience different forces due to pressure. Since the pressure in a liquid is given by $h\rho g$, greater the depth, greater the pressure. So the upper surface feels a downward force while the lower surface feels more upward force. Overall, there will be a net upward force on the object. That is what called bouyant force.

This is a special coincidence discovered by Archimedes.

Not the answer you're looking for? Browse other questions tagged terminology definition fluid-statics buoyancy lift or ask your own question.

2
how dense fluid affect the buoyancy force?
5
Why is Buoyant Force $V\rho g$?
6
What is the basic reason behind buoyancy?
1
Direction of buoyant force
0
Why isn't the apparent weight of a body in a fluid equal to the buoyant force? Why does buoyancy reduce it instead?
2
Why is pressure on object in fluid dependent on height of water column above it whereas the *force* on object is not?
0
How does atmospheric pressure affect the buoyancy of a small particle?
1
Buoyant force on partially submerged bodies