How does a propeller work?

I was thinking about the force that balances the force of gravity in a drone, and I stumbled upon this question that how to mathematically describe the upthrust being generated by the propeller, as a function of the angular speed of the propeller and the angle of bend of the propellers.

Here's what I know:

Here are a few links answers I referred, but couldn't get the exact answer:

Like anything in fluid dynamics, there's no single analytic function to describe the behavior of a propellor.

In general, the thrust of the propellor works the same way as lift on an airplane wing. Lift goes as

where $C_L$ is the empirically determined coefficient for that particular wing/propellor blade.

The "angle of bend" of the propellors is known as the "Angle of Attack". For any given speed through a fluid ("advance ratio", $J$), there's an optimal angle of attack (AoA, $\beta$). 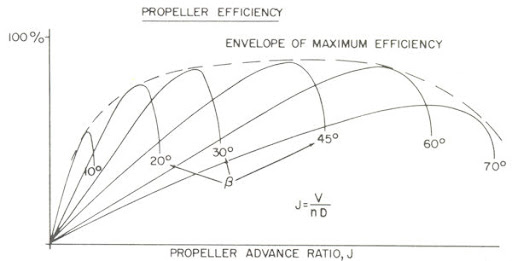 Since you must conserve momentum and kinetic energy (ignoring frictional losses), a slow/large propellor is much more efficient than a fast/small propellor for a vehicle traveling at the same speed. Sending air molecules backward at speed $v$ gives you $\frac{v}{m}$ boost in momentum but costs $\frac{1}{2}mv^2$ energy (this concept is known as "propellor slip").

Not the answer you're looking for? Browse other questions tagged fluid-dynamics everyday-life aerodynamics or ask your own question.

41
What is going on in front of and behind a fan?
4
How do propeller blades rotating through air accelerate it to provide thrust?

1
Calculation for force generated by a rotating rectangular blade
1
Forces on an airfoil
5
Calculate quadrotor propeller torque due to aerodynamic drag
0
How to end up with Newtons in the calculation of the lift force
0
What happens if a helicopter's propeller spins in reverse?
7
Why do all fighter jets and aerobatic airplanes have flat wings?