Can extreme acceleration (or space expansion) disintegrate a proton?

Within mainstream physics the momentum of the proton has nothing to do with its internal structure. The proton is the same in all inertial frames .

Can proton disintegrate into fundamental particles on its own when its speed approaches that of light?

Now the first one says that extreme acceleration, like space expansion at the inflationary period, could tear apart an atom.

The second one says that no matter how fast the proton is moving, there is always a rest frame where the proton is at rest, and it should not disintegrate. Speed is relative. But acceleration is not, it is absolute, and in this case the proton is not in an inertial frame. The constituents of the proton have different rest masses (the different quarks) so they could react on acceleration differently (but this is classical thinking, and they are quantum objects).

The quarks are held together by the strong force, which is a strong force, but not infinitely strong, at some level, the acceleration (or space expansion) could dominate and disintegrate the proton.

The other question you refer to explicitly asks for

Anyway, how are we so sure that as the proton gains more and more energy, it wouldn't break into more fundamental particles on its own without colliding into another particle?

There is an interesting connection of this "requirement" with your new question, where you more focus on acceleration than on just ultra ultra high energy. I mean: if you have acceleration, there MUST be an exchange between the proton and its environment. Otherwise there cannot be any acceleration. Thus, typically electric/magnetic forces mediated by photons must be acting, or also gravity could contribute, etc.

If we consider the proton in a static view (no, or past acceleration) it is stable -- if it does not collide with anything. This was stated and explained by some of the answers: in the reference frame of the proton itself, its velocity wrt. to any outside environment is irrelevant and does not contribute to its stability.

However, the situation changes when external particles enter the field. Then particles could interact with the proton, and in the reference frame of the proton such particles could have enormous energies and lead to any outcome. However, this is not "decay", it is "inelastic collision".

A nice example of this is the Greisen-Zatsepin-Kuzmin Effekt (GZK, https://en.wikipedia.org/wiki/Greisen%E2%80%93Zatsepin%E2%80%93Kuzmin_limit), where protons at energies of $$>10^{18}eV$$ (so called ultra-high-energy-cosmic-rays, UHECR) traveling through the cosmic microwave background (CMB) -- of which the photons just have $$ << eV $$ energy -- will at some point reach the pion-production threshold in the proton rest frame. This baically means the CMB photons seen by the proton will become a $$ >> MeV $$ per photon laser beam with enough energy to lead to processes of the type $$ p+CMB \rightarrow \Delta \rightarrow n+\pi^+ $$ (and similar, delta resonances).

It is quite nice to show that this will happen for proton energies above $$ \approx 10^{19.5}eV $$. Thus, you may say that a proton accelerated to more than that energy will become unstable when it moves through the universe (and where else should it go?) because it will emit pions. But this is not "decay", it really collisions and inelastic processes.

This picture also reflects what can happens if you accelerate a proton extremely: The CMB flux will be replaced with other photons/exchange particles, but the rest remains the same.

I find, in particular, interesting to consider the effect of space expansion. I am not competent to give any details here, but I would speculate that indeed at some point, space expansion and the related acceleration will lead to the disintegration of all nucleons. I can't see how this won't happen -- in a scenario of infinite acceleration.

One if the basic tenets of our mathematical models describing quantum dimension particles is that one can use Feynman diagram series to calculate specific interactions. In adition, that the time reversed interactions can also happen if conservation laws are obeyed.

Can extreme acceleration (or space expansion) disintegrate a proton?

Acceleration by definition at the quantum mechanical level implies an interaction with a field or another particle.

Look at the Big Bang model, where a large number of theorists have been calculating , given reasonable assumptions. There hadronic matter appears 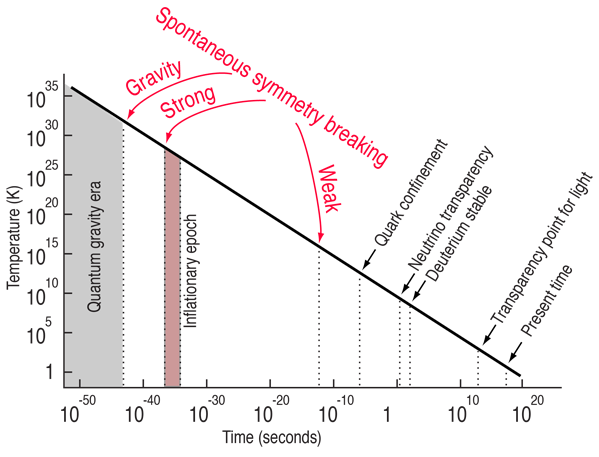 Before quark confinement there were no hadrons, there was a quark gluon plasma. Protons appear after that, when the average energy and number of interactions falls so that the strong force can bind suitable groups of quarks into hadrons, including protons.

You are asking if the opposite reaction occurs, given enough energy and interactions whether the proton will disintegrate into a quark gluon plasma. Within the mathematical models we use to compute quantum interactions, the answer is "yes".

Not the answer you're looking for? Browse other questions tagged particle-physics acceleration space-expansion proton-decay or ask your own question.

9
Can proton disintegrate into fundamental particles on its own when its speed approaches that of light?
2
Attractive higgs force and inflation