Regard Two Objects As One

I was trying to solve the following exercise (apologies in advance for potential mistakes in terminology); illustration will be attached below:

An object with mass $M$ is placed upon a frictionless, fixed slope. The slope's angle with respect to $-\hat{x}$ is $\alpha$. On top of the object is a man with mass $m$. Everything is frictionless and idealized and the only forces acting are gravitation and normal forces. I was asked to calculate the acceleration $\vec{a}$ of the object in a reference frame of my choosing. 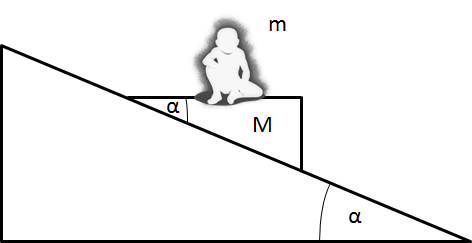 The reference frame I chose is on in which the $x$ axis is parallel to the slope and pointing downwards, and the $y$ axis is perpendicular to it and pointing upwards: 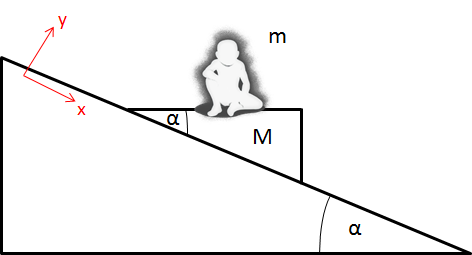 The normal force will negate the effects of the force of gravity in the $y$ direction and so the acceleration will all be in the (positive) $x$ direction.

The bit that confused me is this:
At first, I chose to regard the object and the man as one object since they'll be moving together. Their combined mass is then $M+m$. Writing down some simple Newton laws equations gives me this (the only force acting in this direction is weight):
$$ (M+m)\cdot\vec{a} = (M+m) \cdot g \cdot \sin(\alpha) \cdot \hat{x} $$ $$\Rightarrow \vec{a} = g\cdot\sin(\alpha)\cdot\hat{x}$$

In other words, I get completely different results. I feel like everything I do here is sort of hand-wavy in that many things are neglected and/or taken as ideal and it makes it difficult for me to "debug" this. At the same time, it seems like the fact that I can't easily explain this to myself should point at some pretty serious gap in my understanding, so I'd really appreciate any assistance in solving this issue.

You are missing the crucial fact.

Everything is frictionless and idealized…

Consider this way. There is a ball moving on a table. And another ball is placed stationary on the table apart. Are you going to take them as system and apply equations as in your first method?

Not the answer you're looking for? Browse other questions tagged homework-and-exercises newtonian-mechanics forces acceleration or ask your own question.

0
Forces acting on a body-slope system
0
Why there is an extra componet of force in this Equilibrium state?
1
Why should the Normal apply in the downwards direction?
0
Frictional forces on banked curve