Why can't only one plate of a capacitor get charged? 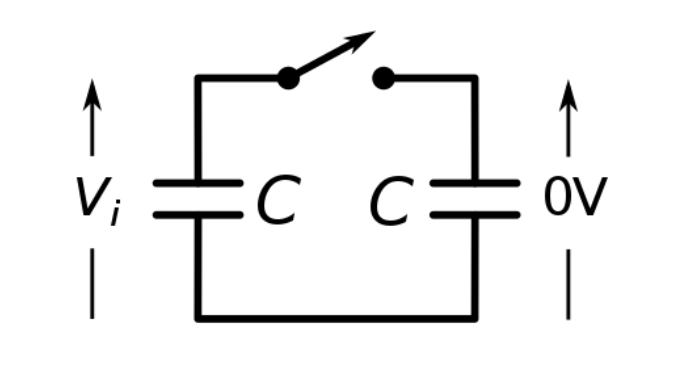 In the above image, one capacitor is uncharged while the other is at a potential Vi. If we close the switch then potential difference across both capacitor would become equal(because the upper and lower plates of both capacitors respectively would gain same potential)

My question is, why does the switch need to be closed? Sure, the circuit would remain open. But if we consider, say, 2 separately charged conductors and connect them with a copper wire, charge flows till both are at the same potential. Why cannot this happen with the capacitors in the picture? The bottom plate of both the capacitors are still connected, irrespective of the switch being closed or opened. Still, charge doesn't flow between the plates. Why is this?

There are two ways to look at this

One is that opposite charges attract each other. So if the bottom half (A) is charged relative to ground, and even more charged relative to the top left half (B), then whatever charges we find in A will be most attracted to B and will migrate as close as possible to them by electrostatic attraction.

We could imagine A is positively charged, B negatively, and the upper right, C, is uncharged. The charges in A are most attracted to B as C has no net charge, so they aren’t attracted to C.

The other way to look at this is that whenever charges are free to move, they “run downhill” to lower energy potential states. The charges will migrate to the configuration of lowest potential. The entire section A and entire section B will still be charged wherever the charge is, to they do comprise a capacitor. So where do the charges go to minimize $V$ across this A - B capacitor?

To minimize $V= \frac{q}{C}$ we maximize $C$, because $q$ is not changing. Because $C=\varepsilon_0 \frac{A}{d}$ for a plate capacitor, we can therefore deduce that maximizing $C$ means lowering the distance between charge (because for a plate maximizing $C$ would mean lowering $d$).

But we also know that potential is the work per unit charge to create this configuration. To minimize potential we minimize how much $\int F dx$ would be used to set-up the separated charges. Clearly they should be as close as possible for that. They’d all be on the left plates.

Not the answer you're looking for? Browse other questions tagged electric-circuits charge capacitance or ask your own question.