What is the maximum possible temperature of a 1mx1mx1m cube that is the focal point of an array of mirror reflected, concentrated beams of sunlight? [duplicate]

Ask Question
Asked 5 months ago
Active 5 months ago
Viewed 122 times
2
$\begingroup$
This question already has answers here:
What temperature can you attain with a solar furnace? (3 answers)
Closed 5 months ago.

If we assume an array of 1m x 1m mirrors reflecting sunlight in an Alabama field to a common point, what would be the maximum possible temperature that could be reached?

How many mirrors in this array could be added that would still have an influence on the temperature of the point of focus? Is the temperature increase proportional to number, quadratic?

The mirrors could be angled and positioned far enough away to be protected from the heat.

What are practical implications in an Alabama field

Engineering questions aside, what hard limits might there be in the physics of doing this on earth (other than the second law limiting it to the temperature of the sun which has been discussed). For example, is there a limit imposed by losses through the atmosphere? If we assume constant atmospheric absorption, what does that do? What the atmosphere changes frequency profile?

Related: Also Highest temperature possible to achieve using magnifying glass and sunlight which links to Is it possible to focus the radiation from a black body to make something hotter than that black body?

One limit, even in space with no atmosphere, with almost infinite mirrors.. is the Sun’s temperature. When it reaches the temperature of the Sun, it must be emitting as much radiation at the Sun as the Sun is emitting at it. So its temperature cannot increase further. (The other question’s replies say only that, as only that was asked. Not a duplicate. E.g. no enquiry about...

Assuming we’ll have a sufficient temperature for radiation to dominate convection, the number of mirrors needed grows quickly:

If $\alpha$ is its absorptivity, $N$ is the number of mirrors, $w$ is the power in $1m^2$ of direct sunlight, $r$ is the fraction of light perpendicularly incident (or equivalent thereof), then the total power absorbed is: $$P_{in}=\alpha r wN$$ 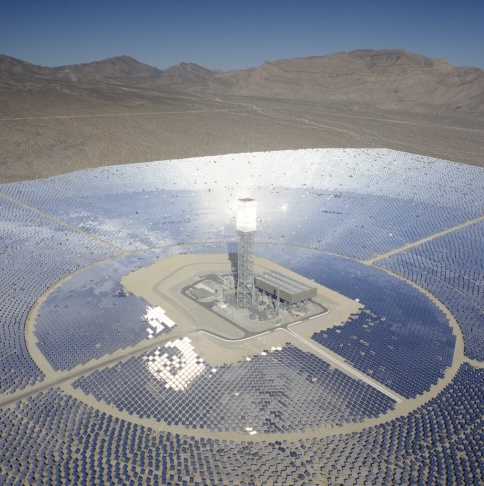 Power plant near Primm, NV where they point a couple hundred thousand huge, curved mirrors at a water tank and make it white hot:

By the Kirchoff Theorem, at that point (equilibrium), $\alpha = \epsilon$. Yes good emitters are usually good absorbers, and exactly so at equilibrium.

It’s interesting that a poor absorber/emitter reaches the same temperature as a good one, as both directions of the power balance are affected. However, if we worried about getting up to a $T$ where convection is meaningless, then we’d want high $\alpha ,\epsilon$.

Assuming it hasn’t melted, some points on this curve in (deg-C, $N$ mirrors) are:

It may seem like $330,000m^2$ of flat mirroring is implausible, until we see what’s been done (well over a million $m^2$ of curved, focused mirroring, see image).

The biggest immediate benefit I can see would be concentrating the incoming light on one side and somehow getting higher absorptivity/emissivity there with a composite or varying surface treatment. If we could get $0.8$ there and $0.2$ on the other five sides, then the effective absorptivity would be $0.8$, but the effective (net) emissivity would be between $\frac{0.8+5(0.2)}{6}=0.3$ and $0.8$ - considering the object’s temperature gradients. If it was $0.5$ for example, then $N$ would go down $38$%.

Absent unmentioned constraints, it depends almost entirely on how exacting the mirror specs can be with respect to their shape and positioning (an engineering question so not considered; curving the mirrors would help a lot). Another salient factor is the object’s altitude. For a ground location, there would be less total heat at equal precision.

Adding more sunlight will always add more heat, but the net heat levels off and cannot reach sun temperature through earth’s atmosphere. That’s because once it’s hot enough, the object will be transmitting heat mostly via radiation, at a rate proportional to $T^4$. Even in space, it eventually emits back as much as it takes in. Otherwise we would violate the Second Law of Thermodynamics with heat flowing from something cold to something hot in a reversible process.

Not the answer you're looking for? Browse other questions tagged thermodynamics optics visible-light solar-sails or ask your own question.

15
What temperature can you attain with a solar furnace?
31
Is it possible to focus the radiation from a black body to make something hotter than that black body?
7
Is Randall Munroe's "what-if" xkcd correct that magnified moonlight can't get things hotter than the moon?
2
Highest temperature possible to achieve using magnifying glass and sunlight

9
Temperature behavior over time of black or white cars in hot, sunny regions
110
Is it possible to start fire using moonlight?
0
If the light is reflected by white painted object, where does the energy rebounces?
0
How to calculate the focal spot size of concentrated sunlight
0
Why doesn't the sunlight supersede the effects of the bodies of water and the ground on the temperature of the atmosphere?
0
Black body: Why a cavity model for a field radiated in free space?