What happens if you use a battery to charge up a capacitor fully, and then disconnect the battery, where does the charge 'go'?

The title says it all really, but I think that since the battery is disconnected there is now an 'open circuit'. I know that charge can only flow if the circuit is complete (closed).

But the part that puzzles me here is, what is there to stop the electrons from the negatively charged capacitor plate 'flowing back' to where the negative terminal of the battery was located before?

I have added a schematic below to clarify what I am actually asking. But put simply, would the charge stay on the capacitor plate(s) or would there be some 'leakage' or 'backflow' of charge away from the charged plates? 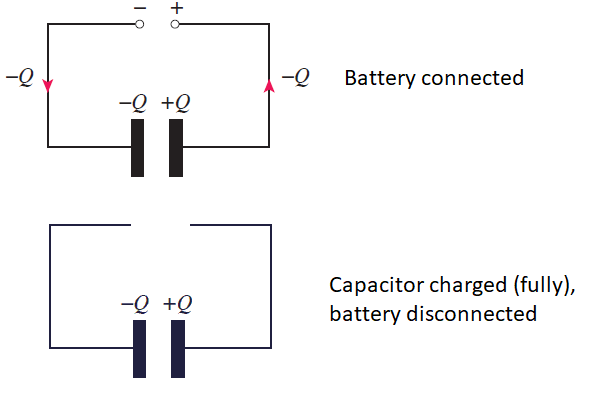 The charge won't go anywhere and the capacitor will remain charged until you short the plates of the capacitor. Where there was once a battery terminal there is now an insulator and that stops the electrons.

Also, the terminal will be made of metal that has a negligible capacitance so can't store significant amounts of charge.

And there is no net charge taken from the battery. The battery will push electrons from one of the capacitor's plate to the other.

Regarding your update: A theoretical perfect capacitor will never lose any volts. A real capacitor will always lose volts because air has some conductance and so does whatever dielectric is used to separate the plates. Even though a practical capacitor will lose volts, the loss may be small enough that it won't discharge in years.

Nothing will stop them, and they do: the now-disconnected capacitor wires are themselves charged to exactly the same voltage as the capacitor plates. This means if you were to grab those wires each in your hands, you would get a full-on electrical shock from the stored charge in the plates.

The dielectric medium between the plates is not perfect, a DC current will allow the charge to leak between the plates reducing the stored voltage difference to zero over time. The leak (or "insulation resistance") can be an important parameter when selecting capacitors in an electrical application.

Also see for example this.

What is there to stop the electrons from the negatively charged capacitor plate 'flowing back' to where the negative terminal of the battery was located before?

It will "flow back", and therefore the entire wire (+ the capacitor plate) is charged. That's why you will get an electric shock by touching any part of the wire or plate. Another way of thinking about it is that the wire & plate are at the same electric potential.

You can get a sense of this from the gold-leaf electroscope. The entire leaf rises when it's charged.

I know that charge can only flow if the circuit is complete (closed).

This is a bit of an oversimplification that you may find in sloppy physics books. In order for there to be a steady current, you need to have a closed circuit. But you can have a transient (non-steady) current flow in other situations. For example, charge in a conductor will rearrange itself so the electric field in the conductor is zero -- during the time when the conductor is reaching equilibrium, current is flowing, even though there is not a closed circuit.

(a) the dielectric between the capacitor plates is never a perfect insulator in reality, so over time charge will flow from one plate to the other and neutralize the charge imbalance between the plates.

what is there to stop the electrons from the negatively charged capacitor plate 'flowing back' to where the negative terminal of the battery was located before?

With the edit to the question which added diagrams, I can now more easily make a point that I only touched on in my initial answer. Note: I'll be leaving out what I feel to be unnecessary complications in order to make the essential point.

Regardless, this capacitor is also charged by the battery to the battery voltage and this means that the wires connected to the plates have a small amount of charge density to establish the electric field between the leads and thus the voltage across.

When the battery is disconnected (in some 'ideal' way that doesn't disturb the leads etc.), this stray capacitance remains charged (again, ignoring all the physical ways charge might 'leak' from one lead to the other).

That is to say, it is not my understanding that electrons from the negative plate charge this stray capacitance after the battery is disconnected, it was already charged.

As others have said, the charge stays in the capacitor until it either gets somewhere to go or leaks away over time. Two real-world examples:

Project in physics class--charge up a 8,000uf, 5?V capacitor, then use that power to power something transporting the capacitor as far as possible. (I made the minimum possible vehicle--the capacitor itself, the drive motor was on the launcher. Unfortunately, I didn't have the metalworking equipment to get it to launch straight enough. Had I gotten a clean launch I could have bounced it off the far end of the hall, but in practice it always spun out before it got that far.)

And, even more dramatic, a You-tube video where he stacked up some ultracapacitors, spent quite a bit of time charging them up then used the power in them basically as wanna-be arc-welder. It could actually melt metal, but didn't really have the power to weld.

May I point out that no matter how many times you state there is no dielectric between your capacitor plates, there is, even in a perfect vacuum. dielectric is simply jargon for "the stuff between the plates that inhibits current flow" which a perfect vacuum is.

You should be picturing electron flow as water flow, the battery provides pressure which gets forced into the capacitor, once disconnected the capacitor provides pressure back to the origin. Nothing can leave the wire, except in the form of heat, which is a function of current. A momentary reversal of current is all you'd see if you use exceptionally long and non-ideal wires. But once the system is at equilibrium absolutely nothing else will happen, no more losses since the current is no longer flowing.

You have to understand that you're asking about non-ideal (real world) situations. An ideal wire has no resistance, no capacitance, no inductance, none of all those really fun things that complicate a system. An ideal wire is generally ignored since the non-ideal wire is more akin to a hose with holes in it but a hose with no holes in it that capacitor can supply as much pressure as it wants, but the water is going no where.

Then we disconnect, and charge cannot escape. The half-circuit connected to plate 1 has $+q$ and other has $-q$.

Since no voltage supplied, charges move to the lowest voltage configuration, and the voltage will not necessarily be $V$ anymore. To minimize voltage, oppositely charged ions (the electrons and the “holes”) will get close as possible to each other. Answers saying do or don’t flow are guesses (cept the Alfred one assuming no location changes)

Depends on where the isolated components are. How did we disconnect? If any part of those wires or routings are close, a reduction in voltage will be achieved by a change in charge distribution. There will still be some voltage, and could be same.