How to determine direction of current in this two loop system? 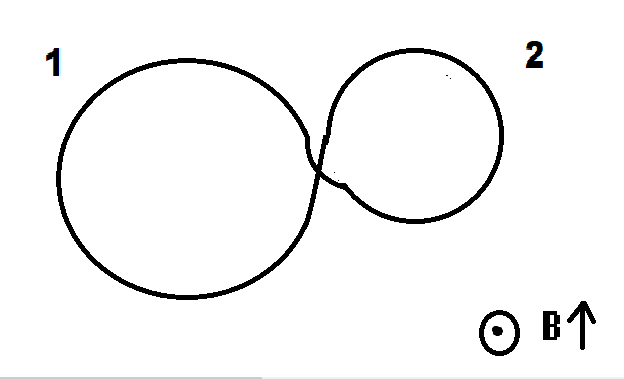 Let's say, there are two loops made from a single wire , loop 1 of bigger area and loop 2 having smaller area.
Now let us suppose, a magnetic field exists in space perpendicular to the plane of the loops and in the outward direction and it's magnitude is increasing linearly. (To neglect effects of self inductance)

According to lenz law , flux due to current induced should oppose the already present magnetic field , but I can't see how loop 1 flux has more opposing flux to overcome supporting effect of loop 2 , even if area of loop 1 is bigger .
Isn't it also that loop 1 magnetic field strength is less (going by formulae for magnetic field at the center of loop).

So , I am just confused about determining the direction of current in this case.

If that is the case then there is one (soap film) surface to consider as shown in the image below.

The total magnetic flux through that surface can be found noting that the directions of the normals to the two surfaces change direction.
The induced emf will depend on the rate of change of flux linked with the whole (copper) loop.
The emf will in turn determine the direction of the induced current which will try to oppose the change producing it.

So basically to represent emf you can draw a battery and you'll see that the emfs induced in the loops oppose each other and as the emf induced in the right loop is less than left one, the emf in left loop dominates and hence now by Lenz law you can say that direction of current will be clockwise in left loop and therefore anticlockwise in right loop

Hope this clears your confusion now

According to Lenz Law E=-$\dfrac{d\phi}{dt}$. As magnetic field is increasing, flux through any loop is given by BA. Where B is the magnetic field, so $\dfrac{d\phi}{dt}$=$\dfrac{dB}{dt}$A. As $\dfrac{dB}{dt}$ is same for both the loops but A, is different, you can find the corresponding Voltages induced in both and can easily find the current direction. Hope this helps