The magnet inside a galvanometer is concave, so we get rid of the $\sin\theta$ factor in the magnitude of the torque experienced when there is a current in the coil. So:

\begin{equation} \tau=NSB \end{equation} where $N$ is the number of turns of the coil, $S$ the area of each turn and $B$ the magnitude of the magnetic field. 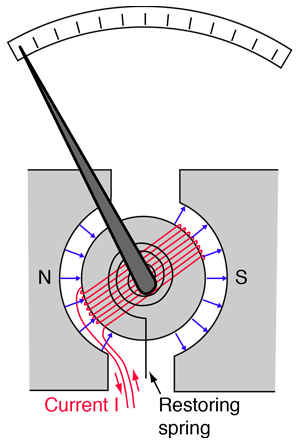 Let $\alpha$ be the angle of rotation of the index. According to Newton 2nd law:

(I is the moment of inertia)

According to the lectures I took

Where the first term is due to air friction while the second term is due to induced emf (R is the resistance of the circuit the coil is connected to) that causes a current, thus a torque. This current is given by:

Where does this come from?

\begin{equation} \phi_B=NSB\alpha \end{equation} that makes no sense to me. Maybe I am wrong assuming $B$ is constant (but it's constant on the sides, thus gives constant torque), I don't know. I can't really understand how the flux rule applies yielding $(1)$ given the geometry of the system. Can you help me figure it out?

You need to consider the motional emf which is induced in the coil.

First consider one coil $WXYZ$ as shown in the diagram below. 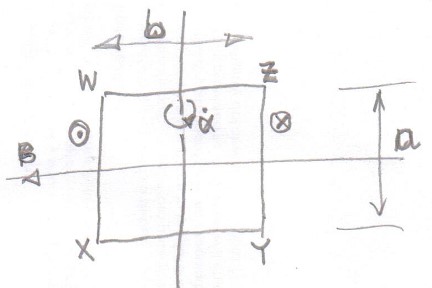 An interesting point about damping caused by this effect is that demonstrations like the one shown below, 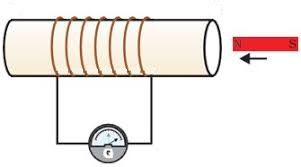 often show a very small deflection on the galvanometer due to the resistance of the circuit being small and hence having high damping.

Another point to note is that the first damping term, $-\beta \,\dot\alpha$, is usually the most significant term and that the damping is due to air resistance and the damping effect of the aluminium former on which the coil is wound. In a well designed moving coil meter the coil arrangement is so designed as to have it just under being critically damped. In this condition the pointer reaches its final steady value in the shortest time without oscillation.

Not the answer you're looking for? Browse other questions tagged electromagnetism electric-circuits electromagnetic-induction oscillators or ask your own question.

1
Lenz' law versus $-\frac{d\Omega}{dt}$
6
How is it possible for the induced emf to take negative values in Faraday's Law of induction?
1
Faraday induction law clarification
1
Delay between the change of external flux and induced current
0
Simple derivative of current confusion
0
How does the speed of an electric motor depend on the number of loops of the coil?
0
An attempt to solve Feynman's Disc Paradox