“S-duality” between confinement and the Higgs mechanism?

I feel picked by the second to last sentence in this answer to a question about what would happen if EM and QCD were spontaneously broken, which says

"In fact, there is a sense in theoretical physics in which confinement is complementary to Higgsing – it's the same thing in different ("opposite", "S-dual") variables"

to explain further why a broken $SU(3)$ gauge group could not be confining.

I'd like to see a further explanation of this. For example which of the weak/strong regime would correspond to the higgsing/confinement regime? Is it as I naively expect from the cited comment, the strong coupling constant that is used to establish the S-duality, or does it work via a more unified higher energy scale coupling constant? Heck, I'd just like to know in some more detail than just this comment, how it works.

Experimentally there are the running coupling constants, which are being used in models like GUTS etc which aim to eventually unify all four forces, strong, weak, electromagnetic, and hopefully gravity. 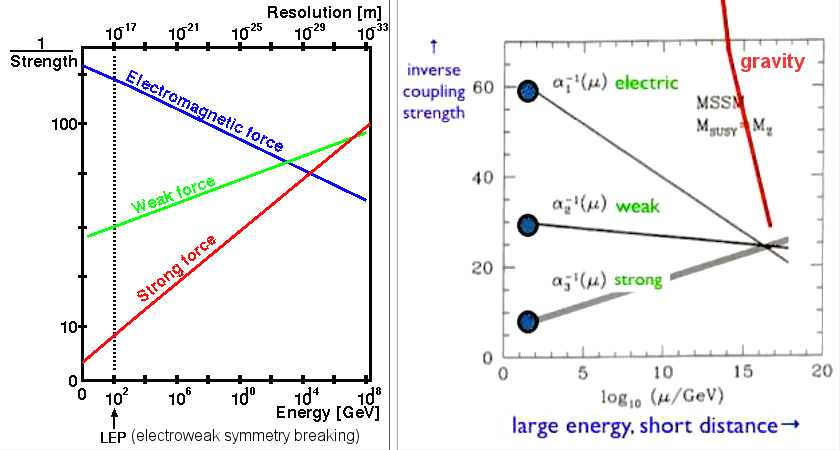 Note the LEP line on the left, that is where experiments are up to now. I do not expect the LHC to improve on this, because of the complexity of the studied interactions .

What is the relevance to the question? It shows that the behavior of strong interactions has an opposite trend from the electroweak tendency to unification, and at best , the three may meet at a point. The unification is proposed with various models to be found in the literature and the breaking of the symmetry will depend on the model. As only the electroweak part is considered standard, and the models make sure that the breaking reproduces the standard model symmetries. Example here. As experimental verification seems very impossible at the moment it is not the symmetry breaking mechanism that will decide among models.

Not the answer you're looking for? Browse other questions tagged particle-physics symmetry-breaking higgs duality confinement or ask your own question.

5
What if EM or QCD was spontaneously broken?