I am a high school student and I am very confused in a topic dealing with "why hot air rises up" I know it is already answered but the answers are difficult for me to understand I want a simple answer which deals in terms of pressure and forces , I know most of the texts says as any air parcel gets hot it's density decreases so it rises up?but it's very vague argument because if they are using density to explain it ,it means they are saying that the air around it has higher density and it exerts buoyancy force on it which arises due to a pressure difference so they are saying that pressure of air surrounding the parcel is higher than the parcel itself which pushes the air upwards but what if we select a very very large parcel for example when we explain why it's colder at higher altitude we say hot air from below rises up and expands adiabatically which decreases it's temperature, but here the parcel is so big (that the full layer near the surface gets hotter)so what is pushing them upwards? And also isn't it very weird to say that buoyant force pushes them upwards because there is not a clear boundary around the hot air on which this force will act like if we have a helium ballon we have a clear boundary but not here.

I used to think of an another explanation that pressure of the hot air itself becomes high ( And it should because the temperature increases so now more collisions and collisions of higher energy should take place)and it rises up (high pressure to low pressure flow)but if that's the case then as it rises fewer and fewer molecules left behind then there will be a time where the pressure drops and becomes equal to the layers above it so at that that time it should stop going up? But that doesn't happen almost all hot air goes up why?

So basically I don't have any simple picture in my mind why should hot air rise up and the air above it should take its place? Please explain in terms of forces and try to give a high school level explanation

EDIT: since many people don't get my question I am explaining it further the answer that I have for this question have this kind of an image 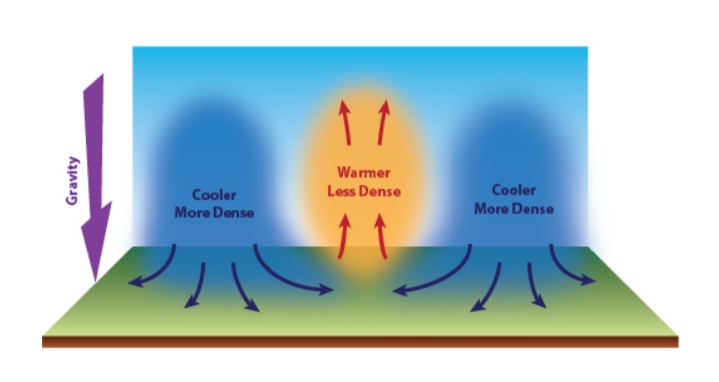 But if this kind of picturization is correct then take a very very huge parcel (entire bottom layer surrounding earth) and we don't talk of any temperature thing we just balances the gravitational force and see that the atmospheric pressure we have at bottom balances the weight of the atmosphere above it as the temperature of the parcel becomes higher it's pressure at first increases because of more collisions(i.e at this moment I am treating it's density to be same as before) and as this happens it should push of the layers above it as it expands (if we are treating them as parcels/seperate air bodies not mixing) and if this happen we are left with no atmosphere on earth but that doesn't happen so it will mix into one another and we cannot treat them as parcels so we cannot talk in terms of buoyant force

I know most of the texts says as any air parcel gets hot it's density decreases so it rises up?but it's very vague argument because if they are using density to explain it ,it means they are saying that the air around it has higher density and it exerts buoyancy force

That is correct. Buoyant force is given by $${\bf F}=\rho V{\bf g}$$ where $\rho$ is the density of the surrounding air, $V$ is the volume of the air parcel and $\bf g$ is the acceleration due to gravity.

Yes, the air expands and cools, and it is cooler at higher altitudes because the air pressure is smaller.

but here the parcel is so big (that the full layer near the surface gets hotter)so what is pushing them upwards?

If the parcel contains air molecules of the same hot temperature, then once again the whole parcel will move upwards. It still has a lower density/pressure than the surrounding air. Try to think about it as a bubble rising in water.

And also isn't it very weird to say that buoyant force pushes them upwards because there is not a clear boundary around the hot air on which this force will act like if we have a helium balloon we have a clear boundary but not here.

Although there will be some diffusion on the boundaries of the parcel, it still is a body of air (with mass and inertia) and will move as a group toward a higher point. As an example, consider that meteorologists consider the atmosphere to be divided into air masses. These are regions of relatively similar temperature and humidity that have fronts on the borders.

why the upper layers comes down if the pressure of hot air increases?

Think about what's happening with the more dense/higher pressure, air around it. This will be pulled down by gravity more than less dense/lower pressure air (that has a buoyant force). Naturally, the less dense air will tend to sit above the dense air.

Thinking about pressure and buoyancy can be confusing, especially since buoyancy forces will be the same for any volume of air. And any pressure differences will more or less come to an equilibrium.

If it helps, you can think about just the density, and how higher density means heavier per volume. So just think about how the force of gravity is stronger for a denser volume.

Thinking about it this way, you can think of your question as "why should dense things fall?" To visualize it, imagine a raincloud. The rain is obviously much denser than the air. The gravity acting on the rain is much stronger than the pressure gradient (or buoyancy) whereas the gravity acting on the air around the rain must be equal to the pressure gradient (or buoyancy). So the rain falls down.

Dense pockets of air compete to reach the ground, and push the less dense air out of the way.

Another way to think about it is the Brunt-Vaisala frequency. If you imagine randomly pushing a parcel of hot air upwards, it is now surrounded by air with even less pressure. The higher you go, the less pressure there is, since the higher you go, the less air is on top. So our parcel of hot air will respond to a decrease in external pressure by expanding, until the pressure is equal. This means the hot air will become less dense. However, the surrounding air can also be less dense, and whether convection occurs depends on which effect wins. Whichever air is denser will feel a greater force of gravity and will be pulled down.

Not the answer you're looking for? Browse other questions tagged thermodynamics classical-mechanics statistical-mechanics or ask your own question.

0
Details on why temperature is lower at high altitude

8
Adiabatic expansion in the atmosphere
9
How does statistical mechanics predict that hot air rises?
8
Why does the air pressure at the surface of the earth exactly equal the weight of the entire air column above it
4
More detail on why pressure increases at the bottom of a column of gas
56
Why does hot air rise in a column instead of cold air pressing down?
0
Why is there a constant pressure when lifting a weight with expanding gas?
1
Does pressure cause things to be hot?
1
Why doesn't a hot air balloon burst even if we keep heating the air in balloon for a long time , shouldn't the air pressure become so high to resist?