Ιn a Kerr Spacetime (for example) how can you relate the simultaneity of a ZAMO observer with the coordinate time $t$?

So bear with me if you can. I will try to type my understanding (which is bad) to this subject (regarding simultaneity), what's exactly the question and why it has came up.

Reading some papers on numerical relativity (Any search of "Numerical Relativity" or "Magnetically Arrested Disk" will result in papers, not posting certain papers for obvious reason. They study a closed system, and the observer, which is us humans, are at inf distance) they refer to "simulation time".

Let's take Kerr Spacetime geometry for example. They relate that simulation time by multiplying it to $\dfrac{GM}{c^3}$, which is just the "unit time" to go from simulation to "real" time, and that's the proper time that passes for a ZAMO observer on infinity (us). Basically its the same quantity multiplied by unity ($\delta \tau = \delta t$)

That got me thinking because I'm not really that experienced with General Relativity (have studied some books, mostly recently, but still my intuition is not good) how can we correlate the coordinate time to an observer time for events that happened so far away (not referring to information travel speed) so easily.

Me, trying to understand it

So what I will try and elaborate here, are things that I have mostly read on 3+1 Formalism in General Relativity which is actually a free e-book from Éric Gourgoulhon and I only refer to it because one can check Chapter 2,3,4 and find these things for himself (hopefully you won't need for this question as I'll try to explain them to my understanding).

If we consider Hypersurfaces of constant coordinate $t$, then, at each point, we can define a unit vector which is prepandicular to that Hypersurface. An example of this is the following picture: 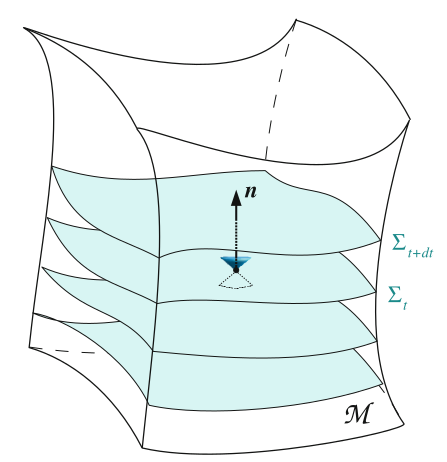 Hypersurfaces of a spacetime, where $t$ is the coordinate time and $\mathbf{n}$ is the ZAMO/Eulerian timeline at a certain point. There are infinite points, so there are infinite ZAMO observers.

Now, I will post a "part" of text that comments on simultaneity of that observer:

From this mark, only the local events that are orthogonal to the ZAMO time-like vector are simultaneous.

So from the "Why" paragraph before, our purpose is to correlate the coordinate time $t$ with the proper time $\tau$ of a ZAMO/Eulerian Observer.

Again, quoting from the book (Italic are comments), we got this:

Let us consider two close events $p$ and $p'$ on the worldline of some Eulerian observer (Meaning that both of these points are on the "line" characterized by n vector).

The proper time $\delta \tau$ between the events $p$ and $p'$, as measured the Eulerian observer, is given by the metric length of the vector linking $p$ and $p'$:

Notice that the lapse function $N$ goes to unity $N_{r \rightarrow \infty} = 1$, so from this equation, the time parameter is actually the proper time, for events on the worldline n.

Of course, the "area" which is perpendicular to the $\mathbf{n}$ as we go to $\infty$ (meaning that the point on Hypersurface of the $\mathbf{n}$ is at infinite) is "the whole" local space. As we can see from this gif, the events on the same parameter $t$ are indeed simultaneous.

Since in bibliography they translate the parameter time $t$ immediately to the proper time $\tau$ of our observer, the "right" answer should be that all events on hypersurface $\Sigma _t$ are simultaneous to the observer in $\infty$.

But how can we prove it? Since from the second quote, there is no immediate result regarding 2 events at "curved" spacetime in relation to the Lorentzian Spacetime in $\infty$.

Really thank you for even reading to this point. Wasn't sure if I should just "throw" the question or try to include some information for it to be more complete. Since in the future, one might have similar questions, I decided to do the last. Sorry for the long text :)

Any input is helpful!

To be a bit more clear, from the above 3+1 General Relativity theory, there is an observer who is called Eulerian/ZAMO and his 4-velocity is always perpendicular to the $\Sigma _t$ Hyper-surfaces.

These observers are unique at each point of the Hyper-surface. For these observers, we can consider what is "simultaneous".

The relation $\delta \tau = N \delta t$ shows how much proper time has passed for these events, and the gif shows what can be considered "simultaneous" for an observer. (Only one can be stattic with respect to the Kerr coordinates though, so one of those 2 observers, would not be considered ZAMO).

So the final question:

Can we prove that the hypersurface of $\Sigma _t$ is the surface of the events that happen at the same proper time of an Eulerian Observer/ ZAMO at $\infty$ ?

Can we prove that the hypersurface of $\Sigma_t$ is the surface of the events that happen at the same proper time of an Eulerian Observer/ ZAMO at $\infty$?

It is extremely common for people to pick a coordinate system, show that at $r=\infty$ their $t$-coordinate (say) coincides with proper time for a given observer, then conclude the $t = \textrm{const}$ hypersurfaces define simultaneity for that observer. By itself, this is not justified! Compare for example the Kerr and Boyer-Linquist time coordinates. These concur at infinity, but are distinct elsewhere.

Another fairly obvious choice is to take a local reference frame, and extend it via geodesics. But various ambiguities and problems can arise, and I would want to see clear physical justifications, especially for extending a frame an infinite distance! Suppose your "observer" is a single point in spacetime, with an orthonormal frame given there. You could use Riemann normal coordinates to extend this frame into a coordinate system, at least over some neighbourhood of the point, and then interpret level sets $T = \textrm{const}$ of your new time coordinate as simultaneity hypersurfaces. Or maybe you use Fermi normal coordinates: but then, what is the entire worldline of the observer -- are they stationary, having always been at $r = \infty$, or a "raindrop", freely falling to or from finite $r$? (I need to do more concrete calculations here, but in the very least this concern applies to the next paragraph, if not here.)

I prefer to take a field of observers, and consider hypersurfaces orthogonal to their 4-velocities, if possible. This keeps things local. ("Orthogonal" implies the Einstein-Poincare conventionality of simultaneity, which I am impressed to see Gourgoulhon mentions.) The idea is to patch together these local choices of simultaneity, into a global choice. Hence, consider the field of Zero Angular Momentum Observers everywhere they are defined, not just a single ZAMO at infinity. (For ZAMOs see e.g. Frolov & Novikov 1998 $\S3.3.3$). This velocity field has zero vorticity, hence is orthogonal to a family of hypersurfaces $t = \textrm{const}$ say. Physically, this means we can extend (the most natural choice of) simultaneity over a spacetime region. Boyer-Lindquist time is sufficient. However the observers have nonzero 4-acceleration, hence no parametrisation $t$ exists which also coincides with the proper time of all our ZAMO observers. (This is related to the Frobenius theorem, see e.g. Ellis+ 2012 $\S4.6.2$.) There is nontrivial lapse.

By definition all events that are assigned the same time coordinate by an observer are simultaneous to that observer.

Now, in Kerr spacetime we can define the surface $\Sigma_t$, which is the collection of events that have time coordinate $t$ (I'm guessing in Boyer-Lindquist coordinates). The question seems to be: who is the observer who says $\Sigma_t$ is a surface of simultaneity?

Whose proper time is equivalent to Boyer-Lindquist coordinate time? You stated the answer in the question: a zero angular momentum observer (ZAMO) at $r\rightarrow\infty$.

A ZAMO at spatial infinity is basically at rest in flat Minkowski space, so their proper time agrees with coordinate time. They observe all events on $\Sigma_t$ to be simultaneous.

Not the answer you're looking for? Browse other questions tagged general-relativity differential-geometry simulations observers kerr-metric or ask your own question.

8
How is the global time coordinate $t$ ("observer at infinity" time) defined operationally e.g. in the Schwarzschild metric?

1
where the proper time is invariant why $d\tau$ is not zero?
16
How one uses the definition of observers in General Relativity?
9
What is physically a spacelike hypersurface?
6
Definition of observer and time measured by different observers in general relativity
0
Simultaneity Postulate for Special Relativity
3
Difference between coordinate time and proper time in general relativity
1
Numerical relativity - coordinates, discretization and shift vector
0
How do you get time dilation from $g_{00}$ in general and from the Schwarzchild metric in particular?
1
Does time dilation in a constant gravitational field depend on the choice of coordinates?