Why do wheels roll if the force of friction does not depend on surface area?

Introductory textbooks explain that friction does not depend on surface area. They usually illustrate this with an image like figure 10.41 on the left shown below: 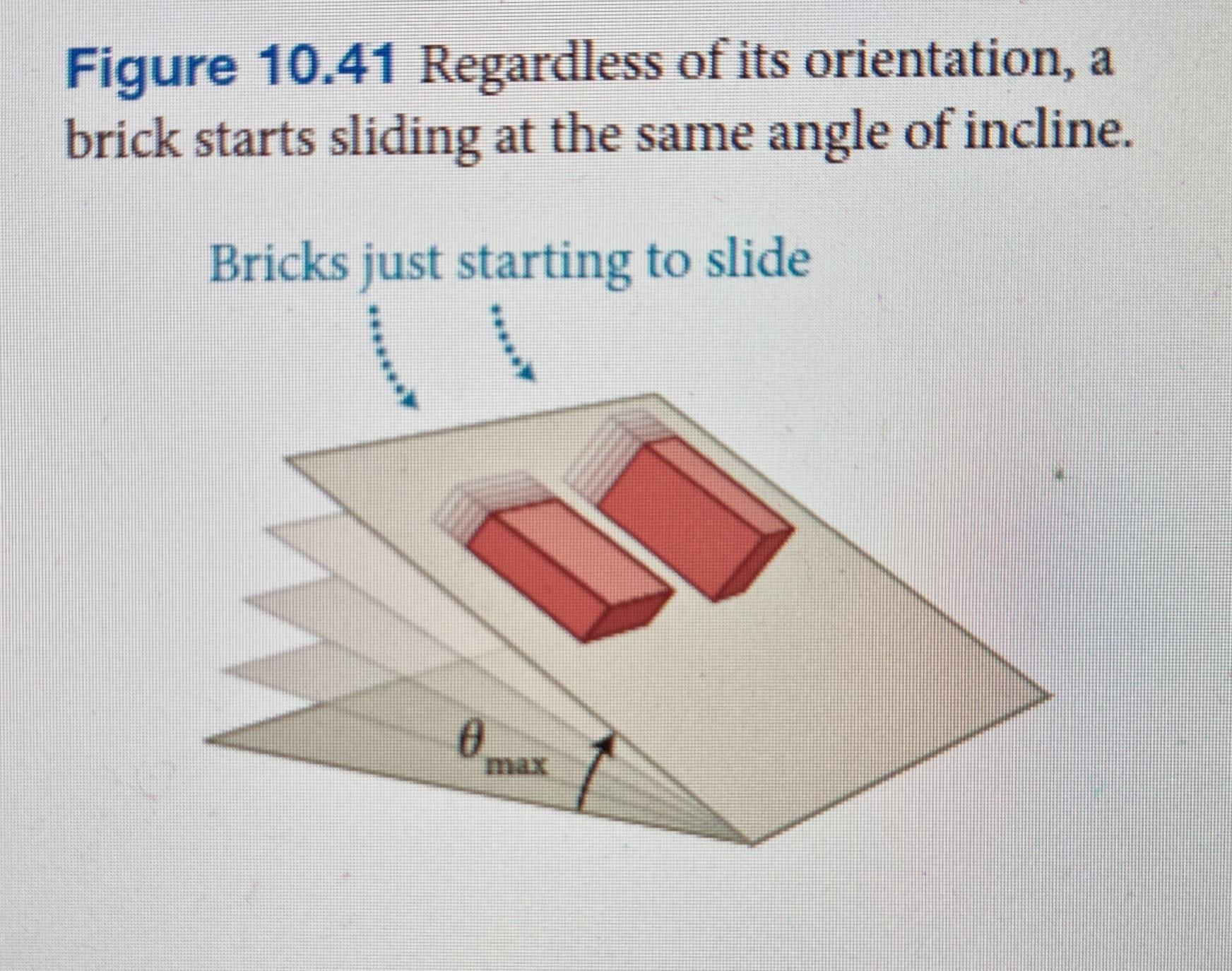 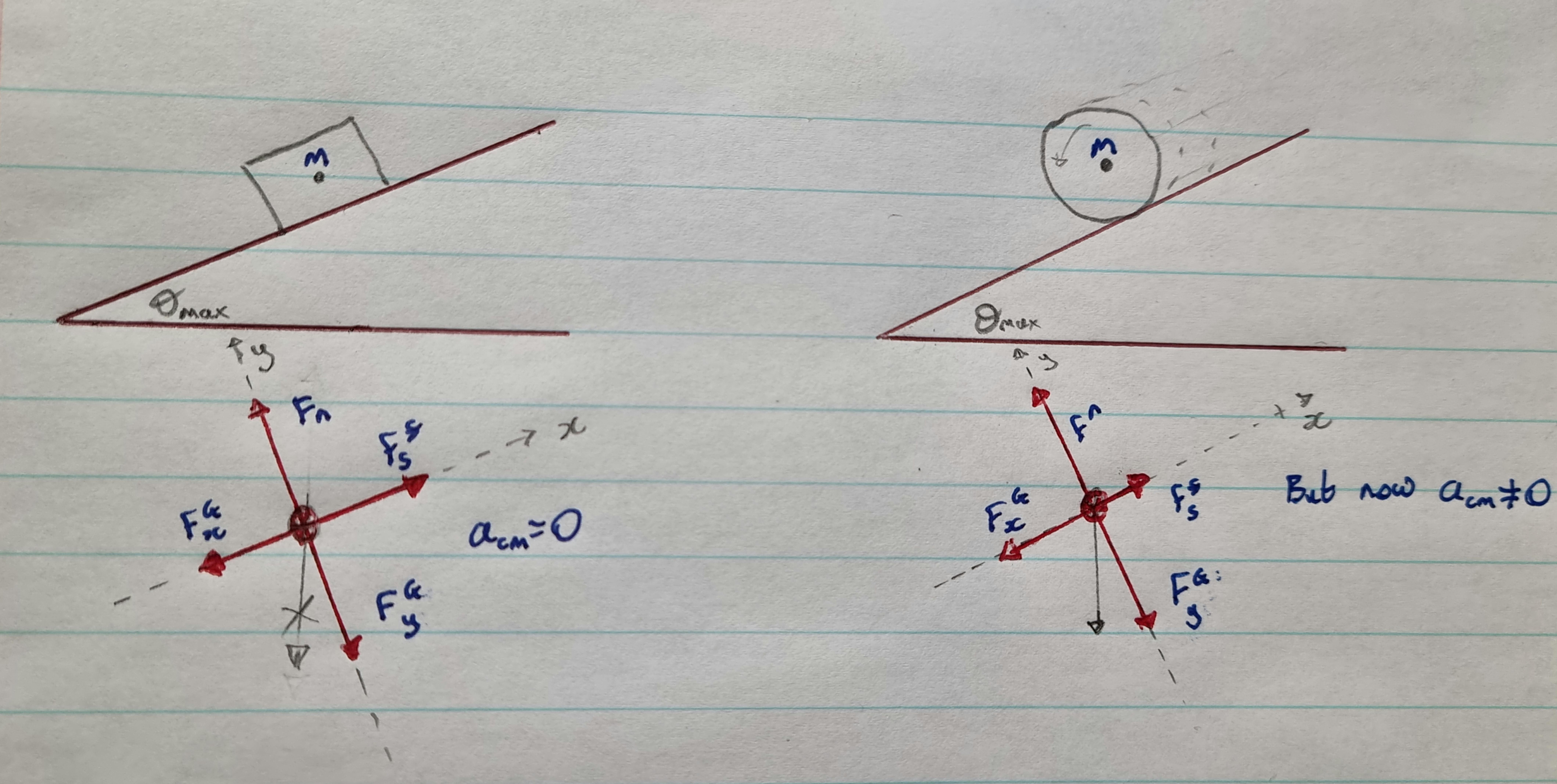 They then also explain that a block of mass $m$ will be able to attain a maximum angle $\theta_{max}$ without slipping down hill. At this maximum angle, the force of static friction will be as follows $F^f_{s,max} =\mu_s F^n$ where $\mu_s$ is the coefficient of static friction. But now imagine the following scenario depicted in the rightmost image above where we have a block of mass $m$ at rest placed on an incline at its maximal angle before slipping occurs

If we now take the exact same situation but replace the block of mass $m$ with a wheel or sphere of mass $m$ as shown in the image above, intuitively, we know that the wheel will not be at rest unlike the block. It will roll down the incline. But the force of gravity for the block and the wheel are same. So I must infer that the frictional force on a wheel is less than the frictional force on an otherwise equal block ($\theta_{block}=\theta_{wheel}$, $m_{block}=m_{wheel}$ etc..).

I have two explanations for this but I'm not sure of their validity. The first is to realize that for the wheel/sphere, the center of mass is not directly above its 'point of contact with the incline' and hence is unstable and will "topple over" due to gravity. This "toppling occurs" immediately and hence the static frictional force possibly does not have enough time (?) to grow and become equal and opposite to the x component of the force of gravity. The second explanation is to suppose that the coefficient of friction does in fact depend on surface area. So do either of these explanations validly explain why the static frictional force is lower for the sphere than it is for the block or is there some other reason?

Sure, the wheel will not remain at rest. But it also will not slide. And that was the condition you set up for the block. So there is no difference in terms of friction between the two.

There is only a difference in terms of toppling tendency, which you also touched at in your next paragraph. This is due to the mismatched centre-of-mass.

Imagine placing the brick on one end instead. If its centre of mass is located beyond the edge of the contact area, then it will topple over. This does not mean that static friction can't hold on to it but rather that the brick is "lifting itself off" of the surface by hinging over the contact point so that static friction doesn't apply anymore. After toppling over, the momentum it gains might keep it toppling (depending on the surface it lands on). If the brick then happens to continue toppling all the way down, then at no point during this tumbling did it slide. It just "let go" of the previous spot to which it was stuck (it was stuck along the parallel direction only) due to static friction.

A wheel does the same thing just with an infinitely small contact area. It basically "topples" constantly but never slides - this is what we call rolling. (This is why the invention of the wheel was quite a paradigm shift, theoretically at least, in engineering: motion without kinetic friction means motion without energy loss ideally. That's quite something.)

4
Blocks stacked on an incline connected by rope around pulley
3
Why does the friction force on a smoothly rolling wheel cause the centre of mass to accelerate?
3
Why do the expressions for an object rolling down an incline not depend on the coefficient of static friction?
1
Is the car braking time formula $ T = v / (\mu_s \, g) $ valid only for uniformly accelerated motion?
0
Does kinetic friction increase a body’s acceleration once the body starts moving?
0
Incline, two objects, same coefficient of friction, different masses, which moves first? Coefficient of friction is independent of mass