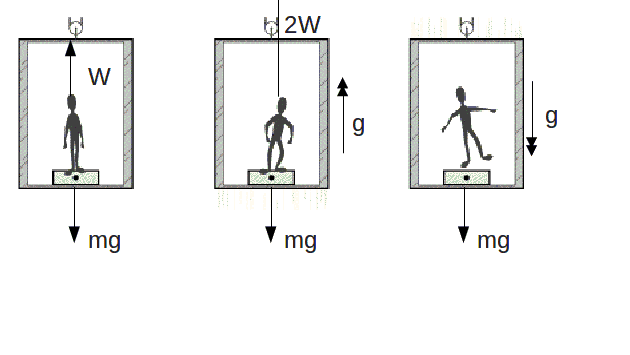 Let us consider +Y as upward and -Y axis as downward. So the acceleration that works these objects is always $-g$.

These results contradicts with weightlessness. Can someone clarify my mistakes?

Now, if a lift is going upward with an acceleration $a$, then the weight of a man inside it will experience a weight of:

where $F$ is the net force acting on the man and $a$ is the net acceleration of the man (and lift of course).

The net force, $F$, is obtained from the difference of the force acting on the man from the floor of the lift (which we are interested in), and the force of gravity:

Now, to feel weightlessness, the lift has to have a certain acceleration value downwards. If this downward acceleration is equal to $g$, we get (we substitute $a$ with $-g$):

So that you don't feel the force the floor is acting on you and are said to be free falling.

Not the answer you're looking for? Browse other questions tagged homework-and-exercises newtonian-mechanics gravity newtonian-gravity free-fall or ask your own question.