Longitudinal stress in a rotating ring

The question below states that

Suppose a uniform steel ring (mass M and radius R) is kept on a smooth horizontal surface with its plane horizontal. It is hinged about a point O on the perimeter & is made to rotate in a horizontal plane as (A, B, & C are points on the ring where A is on diametrically opposite to O while B and C are at the midpoint of arc OA on either sides

Then, regarding longitudinal stress developed in the ring. Now, according to me, the stress should be maximum at the diametrically opposite points as w which is given is constant and hence centripetal force is directly proportional to the distance between the hinge and the point, so tension will also be maximum at that point. But the given is answer is that it is minimum at A. Could anyone explain this to me?

It depends on how much mass it outside the 'radius of rotation'.

For example at B and C, there is tension there, as a centripetal force is needed to make the half circle (green) between B and C rotate. 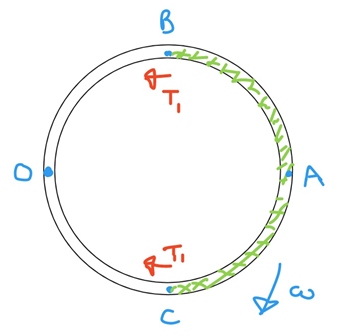 At A there is no mass outside that radius, so there can be low tension as a centripetal force isn't required.

2
Stress developed in a Hoop due to rotation

0
Description of the stress in an elastic ring
2
When to consider rotating body as point mass?
2
Rotational Dynamics Problem Involving Multiple Rods
1
Why do outermost particles on a rotating rigid body gain more kinetic energy?
0
Impulse on a rod hinged at a point
3
Contradiction between Force and Torque equations