How do observers in inertial frames explain fictitious forces?

Suppose a ball is thrown upwards, from the surface of the Earth. After some time, it will obviously fall down back on the surface. However, it would be deflected slightly to the sides of the initial point from which it was launched. From a person, on the Earth, this appears to be a fictitious force, called the Coriolis force, that is responsible for this deflection. However, I've learnt that this force arises because the observer is in a non-uniform reference frame i.e. the spinning Earth. Hence, they perceive this fictitious force.

However, for an observer in space, an inertial frame, how does one explain the deflection of the ball? Is it because of the ball's inertia, that it falls back to the same place, but the Earth has rotated a bit by then ? That is why it seems to be deflected in the direction opposite to the direction of rotation ?

Similarly, a compartment is orbiting a point and is connected by a thread. Inside the compartment, we have a human being. From outside, there is only the tension of the string, that acts as the centripetal force, causing the circular motion. However, it has been said, that the man inside the compartment, feels an outward deflection, that he attributes to the centrifugal force. The compartment itself does not feel any force, because it is stationary in its own frame, but the man inside feels this deflection.

How can the outside observer, explain why the man inside is feeling an outward deflection ?

Consider a skyscraper on the equator of earth. I will draw a cross-section of the earth with the skyscraper from the view of the north pole: 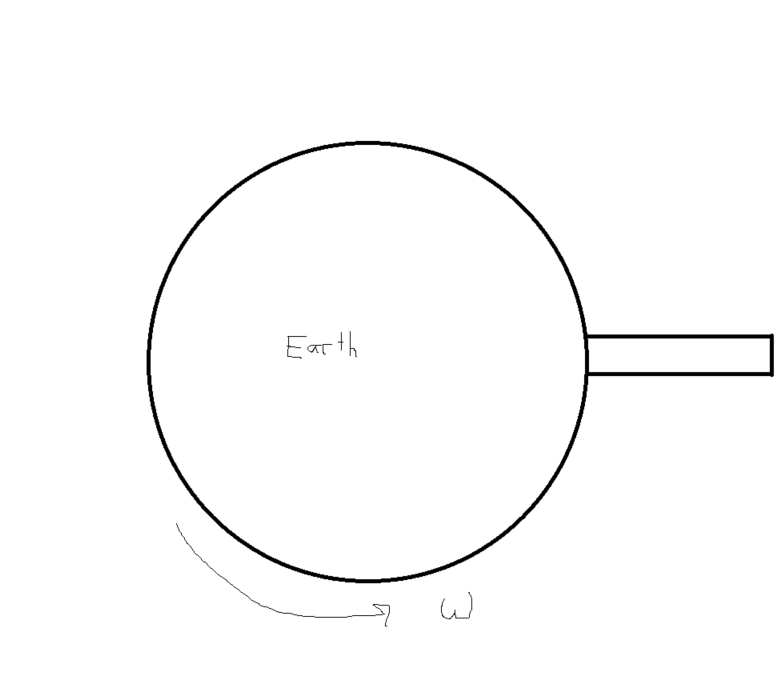 The earth-skyscraper system has an angular speed of $\omega$ = 2$\pi$/(24 hours). Consider the velocity distribution of material points belonging to the system along a radial line: 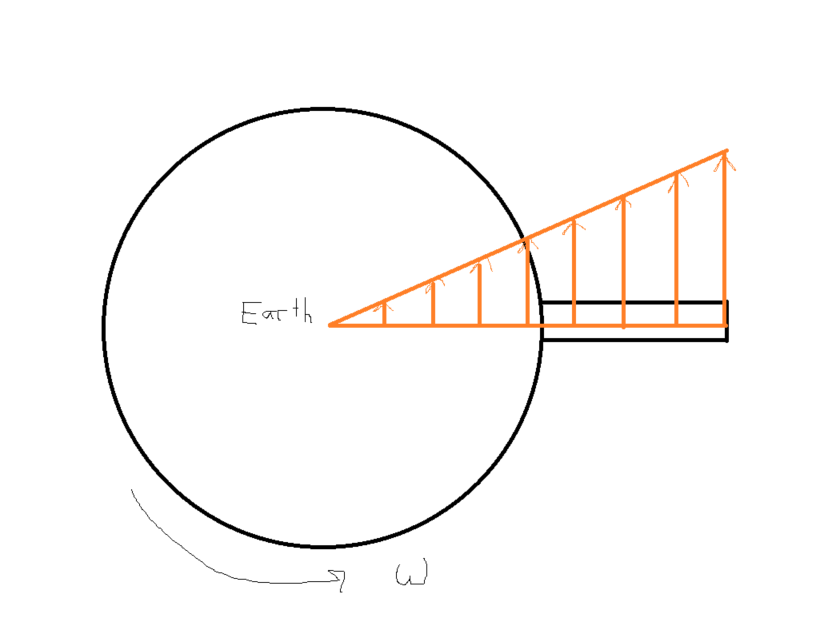 As you can see, the top of the skyscraper moves faster than the ground from the inertial observer's point of view.

As the rock travels towards the ground, assuming no air resistance, it retains its original high lateral speed that it possessed at the top of the skyscraper and develops a radial speed towards the center of the earth. Therefore, when it reaches the ground, it will have traveled a distance towards the east, relative to the observer riding with the earth: 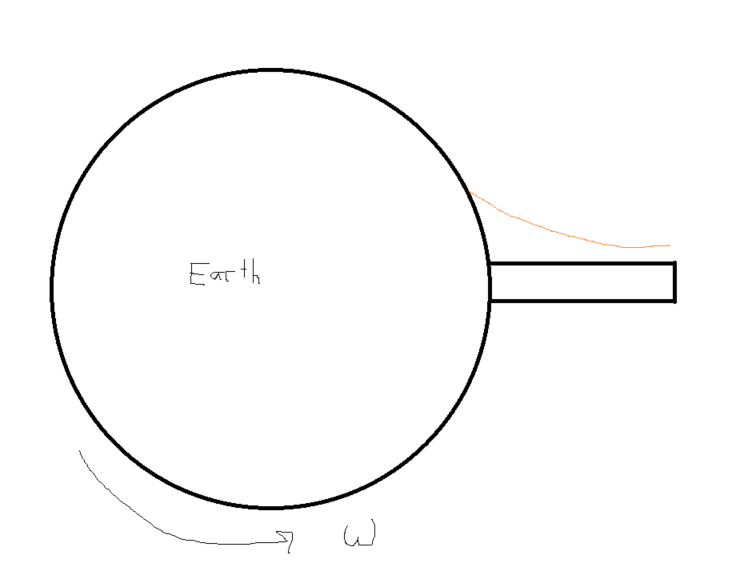 Gravity actually complicates things a little in this thought experiment because the ball path according to the inertial observer is also curved. If you want to really hammer it down, there is a great example of two kids sitting opposite to one another on a merry-go-round. One kid passes a ball directly at the other. Why does the ball appear to deflect in the merry-go-round frame? How does the ball motion look from an inertial observer? Maybe you want to stare at the animation on this page for a while: https://en.wikipedia.org/wiki/Coriolis_force

In your second example of the compartment, the outside observer sees the man tending to travel in a straight line, with the compartment pushing into the man. From the compartment's perspective, this is seen as a centrifugal (fictitious) force of the man.

If the room is being accelerated in one direction, it is as if there is an extra “gravity” pulling everything in the room the opposite direction. If room is accelerating at $+\vec{a}$, everything is pulled on with force of $-m ~ \vec{a}$

Example: normally in a room, gravity pulls on everything. If the room is falling, theres is no gravity, zero g. Where did the gravity go? The acceleration downward of the room created a fake gravity upward.

So all that matters is the acceleration of the frame. Not velocity.

Figure out the acceleration of the frame, as a vector $+\vec{a}$. Take the opposite of that vector $-\vec{a}$ as added fake gravity in the frame. Then add that to the real gravity vector (which is $-g \hat{j} $) to get the net fake gravity $\vec{g_\text{eff}}=\vec{g}-\vec{a}$. Pulling on everything with force $mg_{\text{eff}}$ or with direction $m \vec{g_\text{eff}}$. Spinning frames move tangentially, but accelerate towards the center.

Ignore that the frame is moving. Solve the problem incl $\vec{g_\text{eff}}$. Conservation of mass and momentum and angular momentum still apply. Friction works the same. All the same. (Note: these conservation laws are still being true from a still frame too, but not your concern).

You have answered the first part correctly. The observer in space sees a ball go up and come down while Earth is rotating so it therefore lands in a different spot from where the motion originated.

As to the second part of your question. The man follows a straight path, but the wall of the container is following a curved (circular) path. He therefore feels himself being pushed outward. A better way of looking at this may be what happens inside a car to loose objects when you turn a corner quickly. The objects follow a straight path but the path of the car curves. The result of this is that objects appear to be pushed to the side of the car. But, in reality, these objects are following a straight path and it is the car that is curving.

6
What is the precise statement in Newtonian mechanics regarding the physical laws in all inertial frames?
2
Deviation of free falling objects (Coriolis effect) using conservation of angular momentum
0
Why is there no centripetal force acting on a vehicle while taking a turn in unbacked roads?
1
Coriolis Force: Direction Perpendicular to Rotation Axis Visualization

5
Fictitious forces confusion
0
What is use of inertial frames
0
Direction of deflection of Coriolis force on Earth
3
Is this Coriolis Force explanation simplified?
1
Inertial force in two different frames
0
Inertial reference frames in an atmospheric science context
1
Real force analogue names for the coriolis and azimuthal fictitious forces
2
Direction of deflection due to Coriolis Effect