Could someone explain in simple terms (let's say, limited to a high school calculus vocabulary) why decibels are measured on a logarithmic scale?

Human senses, nearly all, work in a manner and obey Weber–Fetcher law, that response of the sense machinery is logarithm of an input. It is true at least for hearing, but also for eye sensitivity, temperature sense etc. And of course, in areas where it works normally. Because in extreme, there are other processes such as pain, etc.

So as in a cause of hearing, what you experience is the logarithm of power of a sound wave, by "biological, natural, hear sense construction. So, it is natural to use logarithmic units.

I don't know anything about the history of the Bel and related measures.

These scales may seem very artificial at first, but if you use them they will become second nature.

It's just because sounds that the human ear is capable of hearing range over a very large range of amplitudes. If you talked about the power delivered to the ear, rather than the log of the power delivered to the ear, you would need to use numbers like $10^{12}$ to talk about airplane engines. So, rather than deal with that, we use logarithims, so that most of the numbers we deal with when talking about sounds vary over reasonable number ranges.

Not only is the human ear (and other human senses) capable of observing signals over many orders of magnitude, we also perceive these signals more or less on a logarithmic scale. Take the 80 dB of a room full of loud conversation as an example. We don't perceive this as a thousand times louder than the 50 dB of a washing machine, nor a hundred times quieter than the 100 dB of a jackhammer. (Examples from Wikipedia.) Therefore, the decibel scale is not just useful for calculating 3 dB increases or keeping the numbers on human-sized scales, it also approximates the way our senses work.

While most of the answers received so far emphasize the use of decibels as a measure of the loudness of sound, it is important to note that dB are most commonly used in RF engineering and can be used in describing any wave phenomenon that transports energy.

The utility of dB comes from two properties:

A quantity in dB always represents a ratio. An absolute power level in "dB" is always given with respect to some reference value. For example, signal power in RF engineering is often given in "dBm", which are decibels with respect to 1 mW:

Human ear can detect 10^13 units of intensity. By using logarithmic scale, you get a scale of 130 db.

It's a historical accident which has left us a lasting pain in the ass. There's no reason to express sound as decibels: writing the pressure level in Pascals in scientific notation is just as convenient as writing a level in decibels relative to some reference pressure level. And it's often MORE convenient for calculating certain things (i.e. a noise floor expressed in pascals-per-root-Hz makes sense; dB-per-root-Hz or dB-per-Hz makes no sense)

That being said, there are a few possible reasons for using dB:

2) To match human physiology/psychology, since human perception of sound has a roughly logarithmic response to the pressure level.

My understanding is that the dB scale is logarithmic not because this is a quirk of how our ears "perceive" the volume level, but because of how the sound waves actually spread in an open environment.

What is louder, firing a gun in an outdoor field, or firing the same gun in a small square room with metal walls?

It's a trick question, of course - the actual volume produced by the gun is the same either way. The difference is in how the sound waves propagate away from the source (the gun).

Initially, the pressure wave created by the gunshot spreads spherically in all directions. As the sphere gets bigger, the pressure is distributed evenly across the expanding surface area.

The intensity measured at any point along the surface of the sphere is therefore going to decrease proportionately to the increase in surface area of the sphere. This is called the "inverse-square law". The inverse square law tells us that the measured intensity of the sound wave decreases logarithmically. I believe this is why dB is a logarithmic scale - it simply reflects how the pressure decreases with distance. 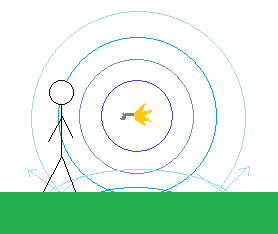 In the above diagram, we can see how the pressure wave spreads outward from the magically levitating firearm in an open field. Some of the sound reflects off of the ground (which is why the inverse-square law is an overly simple abstraction), but it's clear that even at a few feet a significant amount of the pressure wave is moving away from the observer's head and thus won't contribute to the perceived volume level. 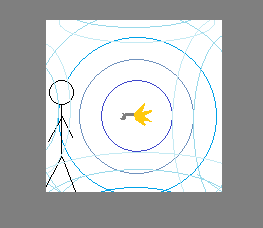 In contrast, if we fired the gun in a small metal room, most of the expanding pressure wave that is initially moving away from our observer would reflect off of the walls and back towards the observer. The observer would then perceive a much "louder" sound (in the moments before they suffered permanent damage to their eardrums), not because the initial sound intensity level was actually different, but because a much greater portion of the pressure wave reaches the observer's ears. The reflections are technically echoes, but at short distances we can't tell the difference between the echoes and the original sound.

Not the answer you're looking for? Browse other questions tagged acoustics information or ask your own question.

10
Does a second similar source of white noise increase the overall noise level?
8
Why do we use decibels instead of just using intensity to measure how loud things are?
4
Why is perceived sound intensity based on a log10 scale?
2
Why are log scales so common?

4
What "propagates" a force through the rest of a solid?
1
Why do the tones differ when tapping on a different part of a coffee cup?
6
Do gravitational waves travelling through a medium produce sound?
3
Can scatter interference patterns from entangled pairs carry information?
3
Why acoustic glitches in stars translate into extra oscillatory components in the normal frequencies?
0
School investigation: How does the size of a resonance box affect the sustain of a guitar string?