We are doing an experiment that is called the Raman-Nath experiment, in which we calculate the speed of sound with the interaction between ultrasonic sound waves and light.

The experiment manual can be found here. If you go through the theory of acousto-optics, it says that there is diffraction phenomena occur because the media act as grating due to a sound waves. The same explanation can be found in this paper. But the we are said, that all that is happening is that light is refracted more due to high refractive index part (that is antinode) and less due to low refractive index point and light passes through these and thus we get high and low-intensity region. There is no diffraction because the sound wave length are of the order of $mm$ and wavelength of light is of the order of $nm$. While this is true, It's contradicting the papers and Wikipedia.

Can you please clarify if there is or is not a diffraction phenomenon?

In our experiment, there are standing waves that are formed in liquid. So I would expect the refractive index of the form $$n(z,t)=n_0+2y_{\text{max}}\sin\left(\frac{2\pi x}{\lambda}\right)\cos (\omega t)$$ Due to the change in refractive index, clearly,, there will be a phase difference between adjacent waves. But since refractive index changing rapidly, the phase will also change so we would not able to observe any pattern but since at the intersection part where the light is passing continuously, you would observe a bright fringe. 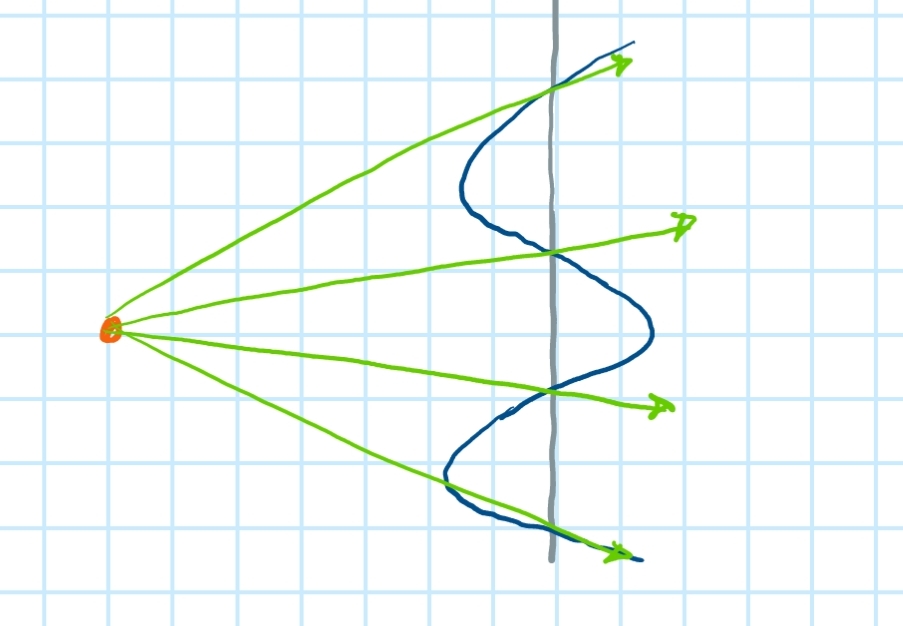 You are talking about the acousto-optical effect, that is lght diffracted by an acoustic wave. There are two regimes to this, Raman–Nath diffraction and Bragg diffraction.

Can you please clarify if there is or not diffraction phenomena?

Yes, there is diffraction.

You can think of this in two ways:

phonons (quanta of sound, black) propagate in the crystal and interact/collide/kick the photons (quanta of light, blue). By momentum conservation, light is deflected and it frequency shifted.

The sound (acoustic) wave propagating in the crystal is modulating the density of the material, which changes its refractive index. The optical length of light in a material depends on the refractive index, so there is a spatially dependent phase picked up by light. This is actually a phase grating, analogous to the usual amplitude diffraction grating that we all know -- instead of modulating the amplitude (light blocked, light let through), you modulate the phase. Then it's diffraction/interference pattern as usual.

Not the answer you're looking for? Browse other questions tagged optics acoustics or ask your own question.

35
Do gases have phonons?

7
Does diffraction occur before interference?
8
How does the Huygens–Fresnel principle apply to diffraction?
1
Phase-shifting by Acousto-Optic modulators
8
Diffraction of Sound Waves
3
Photoelastic modulator vs. Acousto-optic modulator
0
Treatment of "thickness" of medium for light traveling through a low-index medium and being reflected from the surface of a high-index medium
0
How do the evanescent waves contribute/cause a diffraction limit?
3
Change in refractive index due to the acousto-optic effect, and the use of acousto-optic modulators for the sole purpose of frequency shifting
1
How to estimate change in refractive index due to acoustic wave travelling in quartz?