Do the quark types differ from each other in ways other than charge and mass?

I've read things online here and there that seemed to hint that there's more to quark type than mass and charge. Is this true?

For clarity's sake, I'm not asking about properties individual quarks have other than mass and charge, such as spin and color charge. I'm asking about the properties of quark types.

Yep, quarks of different flavours exhibit important differences in their properties. As we know, quarks participate to all known interactions – but the details of how this happens matter.

You might have noticed something weird in the ordering I posted above: why does the heavier $b$ quark live longer than the somewhat lighter $c$ quark? 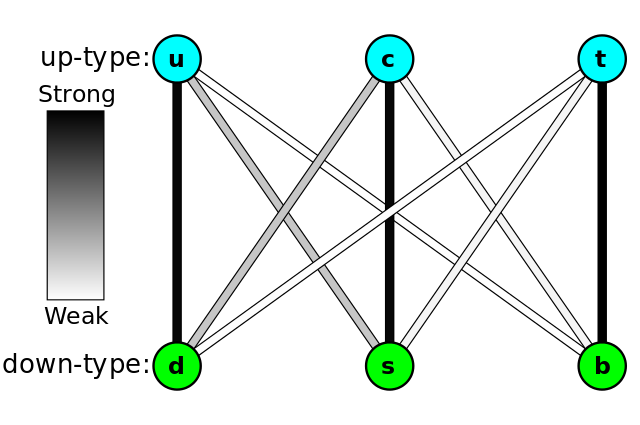 The lines in this figure show the allowed weak decays of quarks; the darker the line color, the more allowed a certain transition is. First, one notices that there is no horizontal transitions such as $b \to s$ or $c \to u$: they are forbidden. In fact, they can appear via more complex, more suppressed, mechanisms with two weak interactions, such as $b\to c \to s$ (see FCNC), but not with one simple weak interaction. Second, one notices that the vertical transitions - those within one generation - are super-enhanced. In about 99% cases, $t$ decays to $b$, or $c$ decays to $s$. The diagonal transitions, such as $b \to c$ or $b \to u$ are much more suppressed. The relation which governs the rates of allowed weak decays of the quarks is the CKM matrix.

What does this observation mean for the lifetimes of the quarks, given that we know quark masses? The $c$ quark has a super-allowed transition to decay to $s$ (plus a suppressed transition to $d$). The $b$ quark, however, cannot use its super-allowed relation to $t$ as the $t$ quark is heavier, so the $b$ quark cannot decay into a $t$ quark! This means, it only decays in suppressed ways to $c$ or $u$ quarks, which makes the lifetime of the $b$ somewhat longer.

Now, what about the lifetime of the $t$ quark? In fact, the $t$ is so terribly heavy that it is heavier than the $W$ boson which mediates weak interactions. The weak interaction is Weak simply because the bosons which govern it are much heavier than particles of interest. This is not the case for the $t$: it simply decays via $t \to W b$ without any kind of suppression. This makes its lifetime ridiculously small at $10^{-25}$ s level. It is so crazy small that we never managed to observe any hadrons (composite particles) containing a $t$ quark, but only the decay products of the $t$ itself.

There is one another cool thing which arises from the structure of the CKM matrix: the CP violation. CP violation means that certain decay modes of a hadron and its anti-hadron have some differences in rate. Nature is such that this effect is the largest in weak decays of hadrons which contain $b$ quarks, and is much smaller in other quark systems.

As you see, the weak interaction is what causes most differences for the quarks of different flavours.

What about the strong interaction? In principle, all quarks are on equal footing here, but... once again, the details matter. The strong interaction has a high power at low energies, it is characterised by the so-called asymptotic freedom. Which means, you cannot take quarks out of their bound state: when you try doing that, the "binding" breaks by creating a quark-antiquark pair. As the strong interaction likes low energies, this resulting quark-antiquark pair is more likely to be made of lightest quarks, $u\bar{u}$ or $d\bar{d}$, than of heavier quarks. (Strong interaction conserves quark flavour, so you need to produce quark and antiquark of the same flavour). For that (but not only) reason, in an average collision at a Large Hadron Collider, you can have hundreds of pions produced but only tens of kaons and ~2 hadrons made of heavier quarks. Pions, made of light quarks, are also copious in decays of heavy hadrons, e.g. $B \to D \pi \pi \pi$ would have a similar or even larger probability compared to $B \to D \pi$.
This special role of light quarks and pions in the strong interactions is represented by the conservation law of Isospin which governs the rates of strong-interaction processes. It is an approximate law, however, because the $u$ and $d$ quarks have slightly different masses.

Finally, going to the electromagnetic interaction. Nothing special here, the electric charge of the quark defines its properties. Quarks can annihilate when meeting their antiquarks: $u\bar{u} \to \gamma \gamma$, but for heavy quarks this electromagnetic process is overshadowed by the strong interaction, $c\bar{c} \to (2-3) \, gluons \to light \, hadrons$.

Some concluding remarks. In experimental particle physics, each quark has its own role. The important law which affects the experimental work is: the heavier the quark, the more difficult it is to produce it. The cross-section of light quarks production is orders of magnitude larger than that of heavy quarks. The $t$ quark is studied separately as it forms no known hadrons and is somewhat special with regard to tools needed to study it. The $b$ quark is a favorite tool of those studying CP-violation. A cool thing about the $b$ is that it is heavy and rather long-lived (if compared to $t$ or $c$) which means there are hundreds of decay modes available for each $b$ hadron. So much to study! $c$ quarks are gaining popularity in recent years with people learning how to measure CP-violation in $c$ hadrons, and they have a lot of data compared to $b$ physics (see my comment about cross-section just above). Strange or light hadrons are often long-lived enough to be treated as stable at the scale of typical particle detector, they even make particle beams made of these hadrons.

This answer is far from exhaustive and I omitted some details for sake of simplicity, but there is some hope I managed to answer the question without risk of getting that nasty comment which the other answers got :)

If the six flavors ($d,u,s,c,b,t$) all had the same mass and charge, they'd all still be distinguishable in the sense that the model still includes observables that (if measured) would detect one species and not the others.

Consider quantum chromodynamics (QCD) with $N$ quark flavors of equal mass, without the weak and electromagnetic and Higgs interactions. This model has a symmetry that mixes all of the flavors together, but it still has observables that detect one of the $N$ flavors without detecting the others. The observables are related to each other by symmetry, but they're still distinct observables. (I haven't thought about how one would actually measure such an observable, but the theory has those observables mathematically.)

Yes, that is true, and well-known.

Quarks come in 6 different families, called flavors: up, down, top, bottom, charm, and strange. Each has a corresponding antiquark family, each of which has the opposite electric charge of the quark family.

Each quark in turn comes in three color charges: red, blue or green, which are complimented by the the anticolors (antired, antiblue or antigreen).

Quarks also have spin 1/2, which can point up or down.

All combinations are possible, and determine exactly how the quark interacts with other quarks: red antibottom spin up, antigreen strange spin down, etc.

Not the answer you're looking for? Browse other questions tagged particle-physics quarks elementary-particles or ask your own question.

4
What is mass of free up and down Quark?
8
Quarks falling in a black hole?
3
What does the mass of a quark mean?
7
Can an elementary particle be reduced to its properties?
4
How does quark color affect the identity of a hadron?
2
For a centre-of-mass energy of $3\,\mathrm{GeV}$ is it possible to make a charm quark?
3
What makes strange quarks stranger than any other quark?
1
Velocities of different quark types inside nuclei
1
Standard Model Particle Properties