What's wrong with this application of Thomas Precession to circular motion velocity measurements?

If you happen to have the Third Edition of Classical Electrodynamics by John David Jackson, turn to section 11.8, as that's where I'm getting all this from. If not, you should still be able to follow along.

In said section, Jackson gives us this equation that relates any physical vector G in a rotating vs. non-rotating reference frame:

"where a is the acceleration in the laboratory frame," according to the textbook. Also, gamma is defined using v, the velocity of the particle as measured in the lab frame.

Ok. So I decided to check this by setting G = x, the position vector, for a particle that is undergoing circular motion in the laboratory frame. So we have

So far so good (I think). Now, this implies that $\boldsymbol{\omega}_T \times \mathbf{x} = \mathbf{v}$. So if we can verify this using the definition of $\boldsymbol{\omega}_T$, we're golden. However, if you use the fact that $|a| = \frac{v^2}{|x|}$ for circular motion as well as the fact that a is perpendicular to v, and that a is (anti)parallel to x, and carefully apply the right hand rule, you'll find, after the algebraic dust settles, that

So this is definitely a contradiction. Because it implies that $\mathbf{v} = (1-\gamma)\mathbf{v}$. Can anyone tell me where this went horribly horribly wrong? I worked on this with my professor for two hours yesterday and we couldn't figure it out.

special-relativity rotation precession
Share
Improve this question
edited May 26, 2013 at 16:02

This is a great question because it brings up some real subtleties that Jackson glosses over -- or at least doesn't make as clear as he could. Different objects have different transformation laws, and the position vector you describe simply does not transform according to the Thomas precession law.

Ultimately, Thomas precession is only useful for vectors that should be measured relative to a "parallel propagated" frame -- that is, a frame carried along with the particle around the circle without any extraneous rotation. (More precisely, the technical name for this carrying is Fermi-Walker transport.) In the original application, the relevant vector was the spin of the electron as it moved around the nucleus. (A more familiar model that's frequently referred to for Thomas precession is a gyroscope, where its spin axis should stay pointing in the "same" direction as it is moved around.) Note that an electron carries its spin along with it, in some sense; it doesn't need to refer to any particular point outside the electron. But the position vector is simply not in this class; it should not be transported with the particle, and you should not use Thomas precession to relate its components in different frames.

Now, you might ask what the transformation law should be, if not the Thomas precession law. Well, you're looking at the time derivative of the position vector, so you're just talking about a velocity as measured in two different frames. You know from basic special relativity that this is described by the velocity-addition formula (with a pretty trivial application in this situation). If observer $n$ (nonrot) measures something moving at velocity $u$, and observer $r$ (rest) is moving with respect to $n$ at velocity $v$, then $r$ measures that thing moving at velocity \begin{equation} u' = \frac{u-v}{1-uv/c^2}~. \end{equation} Here, if the thing being measured is the particle, then $u=v$, so $u' = 0$ is the velocity of the particle in its own rest frame. So, in this case, the appropriate transformation law for the position "vector" $\mathbf{x}$ in your notation is just \begin{equation} \left( \frac{d\mathbf{x}}{dt} \right)_{nonrot} = \left( \frac{d\mathbf{x}}{dt} \right)_{rest} + \mathbf{v}~, \end{equation} which you already knew.

It's also worth mentioning a second subtlety that Jackson glosses over. He talks about the origin of the coordinates of the moving reference frame, but his derivation doesn't actually deal with the origin; it uses rotations and boosts, but no translations. Thus, the formula doesn't actually apply to vectors that specifically refer to the origin -- a fact that you hinted at by noting that the formula applies to "any physical vector $\mathbf{G}$" (emphasis mine). Strictly speaking, $\mathbf{x}$ is a mathematical device with no intrinsic physical meaning. You can use it to label points, so that you could talk about the electric field $\mathbf{E}(\mathbf{x})$ at that point, for example. In particular, its appearance in $\boldsymbol{\omega}_T \times \mathbf{x}$ really makes me nervous without even thinking about the content of the formula. On the other hand, when you differentiate it, you get rid of any dependence on the origin, so $d \mathbf{x} / dt$ is just fine.

To summarize, Thomas precession simply doesn't apply to the position vector. Instead, the relationship between velocity vectors in different frames is just given by the familiar velocity-addition law.

I haven't fingured out how to completely solve the problem, but I have found two mistakes (of which I am absolutely certain of) in what you have done. Incorporating these two is still not giving the right answer, something else is wrong as well.

These pages from Hartle's book Gravity will help. See example 5.6, equation 5.52 and whats written after it. 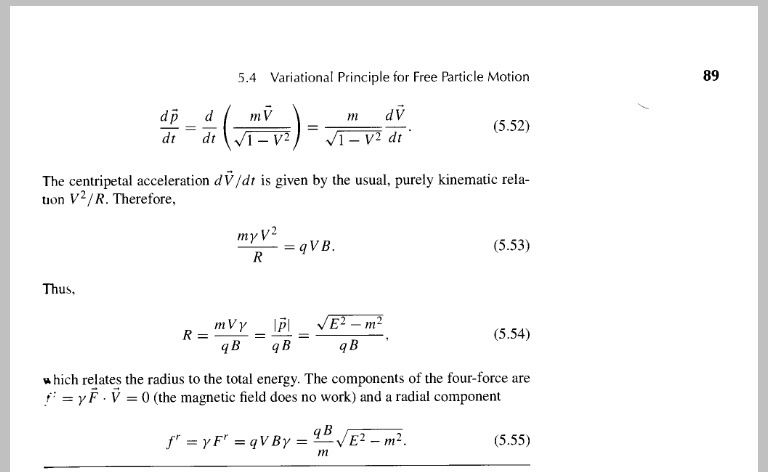 The thing is that the derivation of this formula implies that $\bf{\omega}_T$ describes additional precession due to relativistic effects: 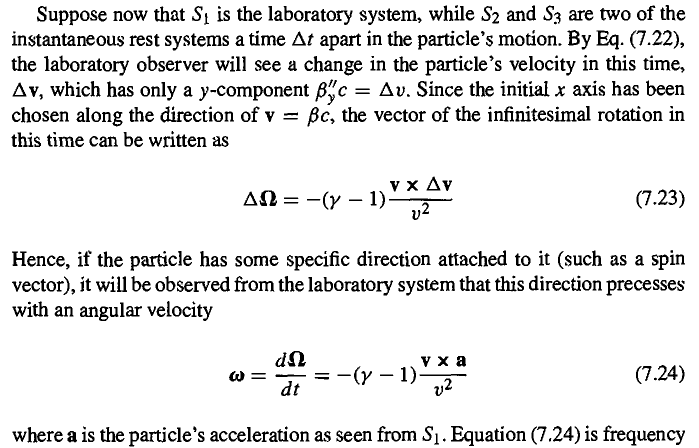 Note that Jackson in the next equation adds $\bf{\omega}_T$ to $\frac{e\bf{B}}{mc}$ - precession due to magnetic field.

Not the answer you're looking for? Browse other questions tagged special-relativity rotation precession or ask your own question.

0
What's wrong with using the 4-current to find the potential of a moving particle?
3
Parallel axes between inertial frames in Special Relativity
3
Relativistic 2-body problem with instantaneous Colomb force
1
Why is it possible to derive the infinitesimal rotation matrix by small angle approximations?
1
Velocity in rotating frame projected onto axis in inertial frame
0
Rotational motion and special relativity