Can a gas sustain a negative pressure?

My textbook states that liquids (say water for example) can sustain "negative pressures" because of their intermolecular attractive forces. The text depicts this concept with the following image 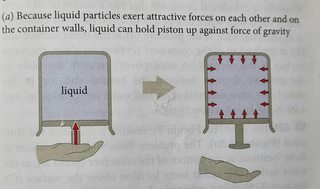 The stretched, negative-pressure states of liquids are not so well-known as the supercooled and the superheated metastable states. Even today, many physicists believe that pressure cannot be negative. Interestingly, in the first decade of the present century, a NATO Advanced Research Workshop, held in Budapest in 2002, was entirely dedicated to Liquids under negative pressure. A recent paper on the subject starts its abstract as follows:

Although pressure is usually believed to be an always positive quantity, negative pressure states exist since the beginning of the Universe, and they have been studied since Huygens.

So, what about negative pressures in gases? Two important factors make the situation of gases very different.

The first is the average larger distance between molecules in vapor with respect to the case of a liquid (almost one order of magnitude larger for the vapor coexisting with the liquid close to the triple point. Larger distances mean that the attractive tail of the intermolecular interactions, responsible for the cohesive force, is significantly weaker than in the case of liquids.

A second related factor is a fundamental asymmetry between the process of stretching a liquid or a gas. In the case of a starting stable liquid state, stretching implies driving it in the metastable region. If we start with a stable vapor phase and increase the volume, we go from a stable phase to another stable phase with a lower density (and still positive pressure).

Not the answer you're looking for? Browse other questions tagged thermodynamics fluid-dynamics statistical-mechanics pressure fluid-statics or ask your own question.

7
Are negative temperatures typically associated with negative absolute pressures?
0
Negative absolute pressure with positive absolute temperature
5
How should I think of a liquid in terms of interatomic potential and molecular speed?
1
Reason for fluid pressure
0
Why do attractive interaction occur more frequently?
2
Pressure correction and volume correction in van der Waals' equation of state
2
Molecular model of liquids
0
If at a given value of reduced volume and temperature, all gasses have the same reduced pressure, shouldn't have value be constant throughout?