How to account for nominal resolution in calibration measurements?

I have a real world question but I think it'll be clearer if I phrase it like a "homework" question so here goes*:

A physicist is trying to use a laser measuring device to determine the length of a piece of string with high accuracy. Their device has a nominal resolution of $\pm 10 \mu m$, which the user manual goes on to explain refers to the edges of a triangular probability distribution of where the true value the device reads might lie. That is the readings it outputs are in 10 micron increments and a value of $1,350 \mu m$ actually represents a triangular probability density function centred around $1,350$ with width $\pm 10$ (see diagram below) 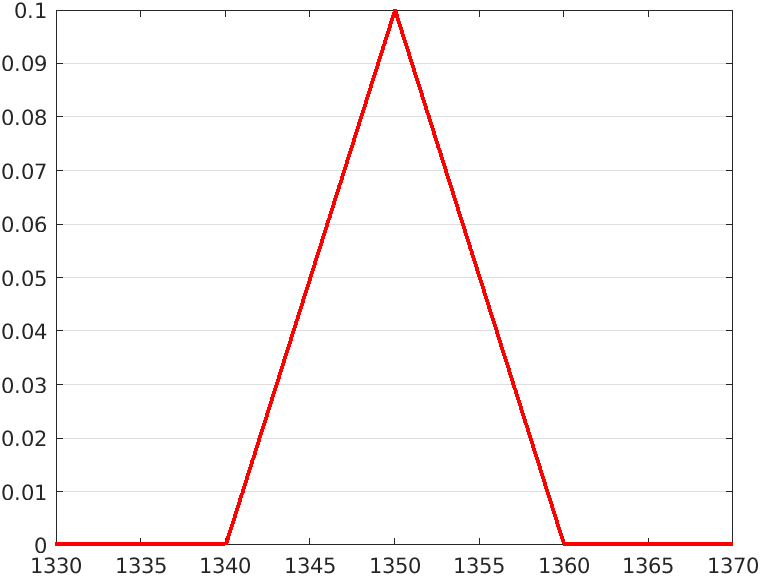 The experimental setup is simple. For a known length calibration piece of $1000\mu m$, several measurements are taken. These might be as below:

... so clearly there is some rounding owing to the instrument resolution, and some uncertainty from other factors. Using this information, the physicist would like to model the error as a Normal distribution $Err\sim\cal N\left( {\mu,\sigma^2} \right)$ and calculate the most likely values for those parameters...

* The caveat for asking this in homework style is I may have missed out some important details required to give an answer, so if you need clarification or more details please ask

Ok so I have 2 approaches:

So I'm a bit stumped on how to fit to a t-distribution or what adjustments I need (given the small sample count and large relative resolution error, $\sigma$ I expect will be larger than just the sample standard deviation of the data itself).

First things first, in the comments you mentioned there is an offset from the sample mean and the calibration length, implying there is a bias in your measurements. This is very important to understand -- for example, can it be corrected by subtracting a constant value, or by rescaling by a certain factor? My suggestion is to try different calibration lengths, and see how the bias depends on the length of the string. A subtlety here is that you need a way to know the length of your calibration string with at least as much precision as your measuring device, but without using the measuring device you're trying to calibrate; I trust you have a way to do this. Below, I'm assuming you have a way to correct the bias, and apply it to $d_i$. You can also extend all the analysis below to include a "calibration parameter", say by rescaling the data in the likelihood; I can add some comments if you want.

In terms of the error analysis, in the comments you mentioned a Bayesian analysis would be worth doing -- as I mentioned this is on the upper end of the "effort" scale (so this answer is pretty involved!), but the net result will be a flexible framework to get a posterior probability distribution for the length $\ell$, able to incorporate multiple kinds of uncertainty. Before getting stuck in, I'll just mention some simpler (but less rigorous) approaches would be to: (a) look at the standard deviation of the means of the measurements you've done to get a "calibration error" that you can add in quadrature to other uncertainties, (b) fit a Gaussian directly to your observed data with the mean and standard deviation as parameters (this is your option 1 above, and also the first Bayesian model I consider below, but you don't need an MCMC sampler to do this if that's all you need).

If the parameter space is not too large, it's not too much work to code up something that will evaluate the likelihood on a grid and compute/plot the posterior (as well as desired credible intervals), in your favorite programming language (I am partial to python). Alternatively, if you don't want to do that or if you have more than 2 or 3 parameters, it's better to use a sampler. There are several off-the-shelf samplers that are pretty good: emcee is a good MCMC sampler in python, and dynesty is a nested sampler. If you don't know much about samplers, it's probably better to stick with an MCMC sampler to start with, since the way they work is easier to understand and their output is easier to interpret (in my opinion), and also practically speaking it's possible to get intermediate results while the sampler is running (unlike nested sampling).

The main ingredients to a Bayesian analysis are the likelihood and prior.

The likelihood is the probability of the data given the model, $p(d_i|\Theta)$, where $d_i = \{d_1, d_2, \cdots, d_N\}$ are the data (in your case, a list of $N$ observed lengths) and $\Theta$ are the model parameters (we'll consider a few options). My philosophy is to start with a simple model and make it more complicated if it fails. A simple starting point would be to say the combination of the "resolution error" and other errors can be described with a Gaussian distribution: \begin{equation} p_{\rm G.L.}(d_i|\ell,\sigma) = \prod_{i=1}^N \frac{1}{\sqrt{2\pi \sigma^2}}e^{-(d_i-\ell)^2/2\sigma^2} \end{equation} where "G.L." stands for "Gaussian likelihood" (to be compared with a few other options below), and where the model parameters are

Regardless of whether or not you decide to make the model more complicated, I would start off by implementing this Gaussian model in your sampler of choice, because it is simple and you want to get your code working on a simple model before extending it.

Anyway, the point of this discussion is not so much to suggest any one particular model (I would use the first two as training and the third one as my first "real" case, based on what you said in the question and comments). But, to point out the kind of logic you can use to build models of your uncertainty and fit them into a Bayesian framework.

You also need to decide on priors. Generally, a good starting point is to place uninformative priors on your parameters. While there are lots of debates as to what this means, a simple and justifiable choice is to take uniform priors on every parameter.

Once you code up the likelihood and prior in whatever format is needed by your chosen sampler, run the code and look at the results! The results will take the form of samples drawn from the posterior distribution $p(\Theta|d_i)$ of the parameters given the data, obtained using Bayes theorem \begin{equation} p(\Theta|d_i) = \frac{p(d_i|\Theta) p(\Theta)}{p(d_i)} \end{equation} where $p(d_i|\Theta)$ is the likelihood (which we discussed in detail), $p(\Theta)$ is the prior (I gave some advice above), and $p(d_i)$ is a normalization constant sometimes called the "evidence" (which you don't need to compute if you are only interested in the probability of different parameters). At the end of the day, I think you will want to construct the "1-dimensional marginalized posterior" for $\ell$. In other words, assuming we work in the G.L. model, you would want to plot \begin{equation} p(\ell|d_i) = \int_{\sigma_{\rm min}}^{\sigma_{\rm max}} {\rm d} \sigma p(\ell,\sigma|d_i) \end{equation} where $\sigma_{\rm min}$ and $\sigma_{\rm max}$ are the bounds of the prior on $\sigma$. With the output of the MCMC sampler (samples drawn from the posterior distribution), this procedure can be done by simply histogramming the samples by the value of $\ell$.

Some practical advice on interpreting the output of MCMC samplers (and in particular checking for convergence and other problems that can arise) can be found here:

Not the answer you're looking for? Browse other questions tagged error-analysis metrology or ask your own question.

0
Why is the standard deviation the error on the singular measurement?
1
Systematic+Random Uncertainty for velocity measurement
5
How does one combine independent repeatability and accuracy uncertainties on the same quantity in a reported uncertainty value?
1
Assigning distributions to the result of measurements
1
Means to improve precision and accuracy
0
What's the meaning of the $\sigma$'s of a particle physics measurement?
1
Error on the mean of several measurements with error
0
Errors in measuring devices
4
Should we include instrumental uncertainty when calculating the uncertainty of a measurement?