When Sun was forming and before nuclear reactions inside the core what should have been its surface temperature?

When the Sun was forming and before all the nuclear reactions started inside its core, what should have been its surface temperature (only due to gas friction)?

The pre main-sequence Sun, like all low mass stars, would have contracted at approximately constant effective photospheric temperature along the Hayashi track in the Hertzsprung-Russell diagram.

EDIT: If you want to investigate these things yourself, I recommend the site
http://svo2.cab.inta-csic.es/theory/iso3/index.php which is an internet server for stellar evolution models. You can choose a particular model at a particular mass and plot the evolutionary track on a Hertzsprung-Russell diagram. The diagrams could be a bit clearer (the x-axis is effective temperature, the y-axis is log luminosity in solar units), but here is one for a 1 solar mass star from the early pre main sequence (on the left) through to the end of the main sequence (on the right), using the solar metallicity Pisa models.

The Hayashi track is the almost vertical branch on the left. The exact temperature on this branch depends to some extent on model details like the adopted opacities and mixing length so could be uncertain by $\pm 200$ K. 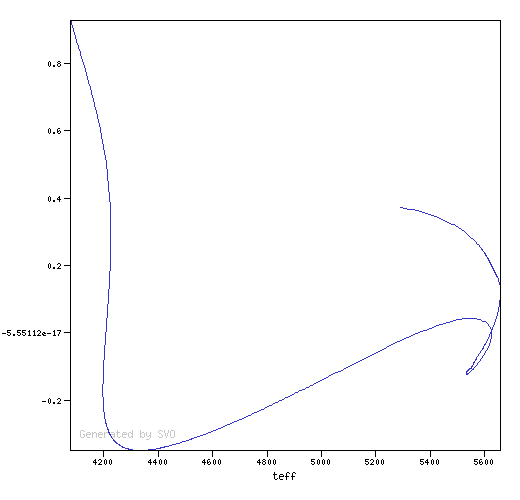 The surface temperature of the sun should have been pretty much the same as it is now. Without an internal heat source, the star will be in a state of isothermal hydrostatic quasi-equilibrium governed by gravity and the internal pressure gradient only. It is not too difficult to show that in this case the matter density depends on the radius $r$ like $1/r^2$ and the total gravitational potential energy of the star with mass $M$ and radius $R$ thus becomes

with $G$ the gravitational constant, $M$ the mass of the sun, and $R$ its radius. Using the virial theorem

which means (using $\overline{E}=kT$, where $k$ is the Boltzmann constant)

Note that we have actually a 'star' without nuclear reactions in our own solar system - Jupiter! If you apply the above equations to an object with the mass and radius of Jupiter, you obtain for the gravitational temperature a value of $1.1\cdot10^5 K$ and a surface temperature of 60K. This matches quite well the published surface temperature of 78K (see https://en.wikipedia.org/wiki/Jupiter ; you obviously have to take the minimum (night time) temperature here, as on the day side you have additional heating by the sun).

More detailed explanation of the physics determining the surface temperature:

the crucial factors here is the $1/r^2$ decrease of the particle density with increasing $r$ which implies the existence of 2 zones within the star, one where the density and energy is too high for atoms to form (only bare nuclei and electrons make up the plasma here) and another where matter is dilute enough that atoms can exist (i.e. the atmosphere). This is what defines the 'surface' (photosphere) of the star: the high energy nuclei (mostly protons) coming from below are able to excite these atoms through inelastic collisions and lose all their energy in the process (which is being radiated away). But they gain some energy again through elastic collisions with the high energy electron background. From classical mechanics it is known that the energy transfer in a collision between two very different masses is given by the ratio of the masses, so in this case the ratio electron/proton mass (in principle the energies should equalize after a sufficiently long time in the course of multiple collisions, but close Coulomb collisions will also be associated with a high probability of recombination, so effectively there is only one energy transferring collision and thus only a fraction $m_e/m_p$ of the initial electron energy is transferred to the kinetic energy of the protons).

Not the answer you're looking for? Browse other questions tagged temperature astrophysics sun solar-system stellar-evolution or ask your own question.