In “A Brief History of Time”, Hawking explains Newtonian gravity in Chapter 2, Space and Time. The further apart the bodies are, the smaller the force. The gravitational attraction of a star is exactly one quarter that of a similar star at half the distance. This is because as we know, gravitational force is inversely proportional to the square of the distance between the bodies.

Next comes the part that confuses me.

If the law were that the gravitational attraction of a star went down faster with distance, the orbits of the planets would not be elliptical, they would spiral in to the sun. If it went down slower, the gravitational forces from the distant stars would dominate over that from the earth.

I am unclear as to what the meaning of "went down faster with distance". Gravitational force is indeed going down with distance. By adding "faster", does he mean the rate of change of gravity with distance, which would then be the derivative of $r^{-2}$ ($r$ is distance) = $-2*r^{-3}$. This tells us the gravity goes down faster with distance? I am confused. Can someone explain what he is trying to say and how we can conclude that this would either cause the planets to spiral in to the sun or how distant stars would dominate over that from the earth.

As you say in your question the gravitational force is proportional to $1/r^2$ so we can write it as:

Hawking is referring to Bertrand's theorem, which tells us that we have stable closed orbits only when $n = 2$.

As it happens the force is not quite an inverse square law. When we do a more accurate calculation using General Relativity we find the force is very slightly different from a $1/r^2$ force. The difference is tiny, but measurable, as it leads to the anomalous precession of Mercury.

By "went down faster with distance" Hawking meant that the force would drop off more as distance increased, as in the red curve below. Distance is along the $x$ axis and the blue curve is the usual inverse square law. 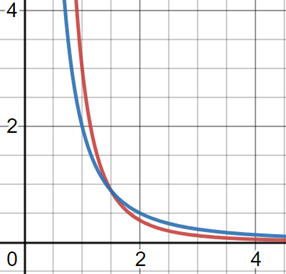 This can also be thought of as gravity getting much stronger as distance decreases, i.e. the force is higher, for small $r$, for the red curve.

So with the red force curve, a planet that got too close to the Sun would not be able to orbit in a stable way, instead it would spiral into the Sun.

The gravitational attraction of a star is exactly one quarter that of a similar star at half the distance. This is because as we know, gravitational force is inversely proportional to the square of the distance between the bodies.

For example, in a hypothetical universe, replace "one quarter" by "one eighth" and "square" by "cube". Then you have a gravitational force that goes down faster than in our universe.

Not the answer you're looking for? Browse other questions tagged gravity newtonian-gravity orbital-motion distance or ask your own question.

5
What is the reasoning behind the Hill Sphere?
0
Why Sun is not able to attract mercury closer?
1
Change in gravitational effect between Earth and the Sun
5
Why are large planets away from the Sun and smaller planets near the Sun?
0
Why doesn't the force of gravitation on the earth due to the Sun change?
1
Does the gravitational field change in the vicinity of a nova?