This doesn't feel quite intuitively right, however. When the angular frequency $\omega$ of the thing which is causing the forced oscillating is equal to the natural angular frequency $\omega_0$ of the system it is causing an oscillation in, this seems to work intuitively. But when this isn't the case, it seems like $x(t)$ cannot be modeled as a single trig function, but rather a combination of multiple.

For example, in this video at 1:26, the frequency $\omega$ of the vibration generator is set to 2Hz, which is different than the natural frequency $\omega_0$ of the system (this turns out to be $\approx3.33$Hz) and the motion of the mass does not appear to resemble a single trig function, but rather multiple.

Here is my best attempt to graph the seeming motion at 1:26: 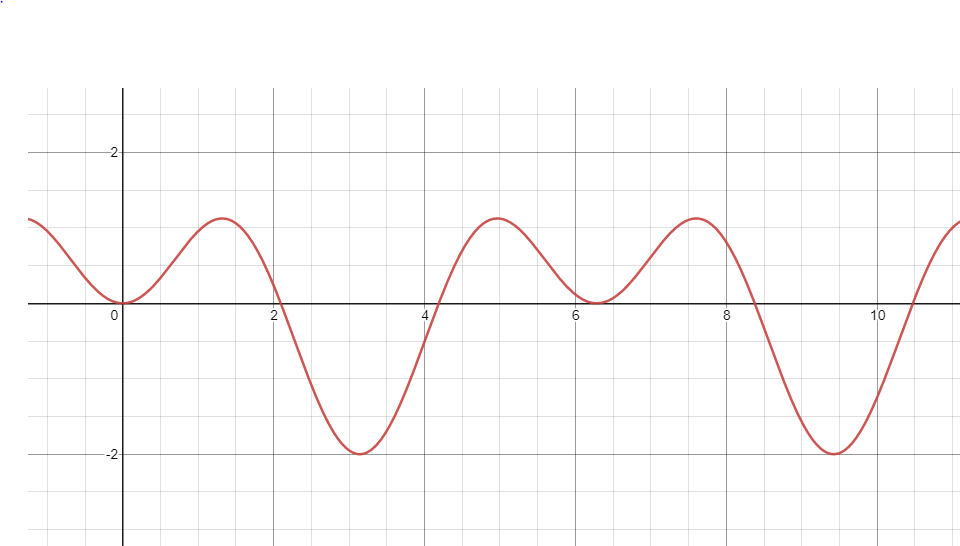 My question: Is the formula incorrect/a simplified version? If so, what is the correct one? If not, where am I going wrong here?

The transient part depends on the initial conditions and both parts are present at the start. As time goes on, the transient part decays exponentially, leaving only the steady-state solution, which is the one you quoted. The full equations can be found here. Therefore, at the beginning, the motion will not be a single pure trig function but rather a sum of two trig functions.

When watching the video (beginning at around 0:35) carefully, we can see that the driving element (at the bottom of the device) does not move in a purely sine oscillation. It moves more like this: 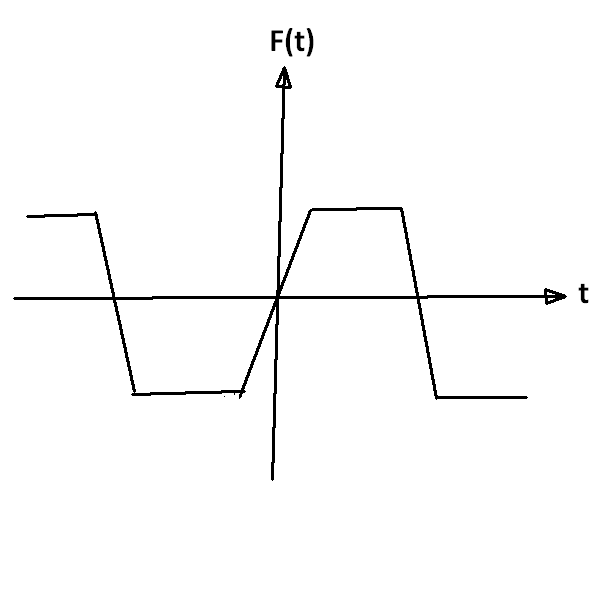 The driving movement is still a periodic, but not a sine-like function.

You can decompose this oscillation (like every periodic motion) into a Fourier series of several pure sine oscillations.

To convince you of the validity of the Fourier decomposition, here is a plot of $F(t)$ with only the first 3 components of the series being considered. When considering even more higher frequency components, then the series would approximate the function from the first image even better. 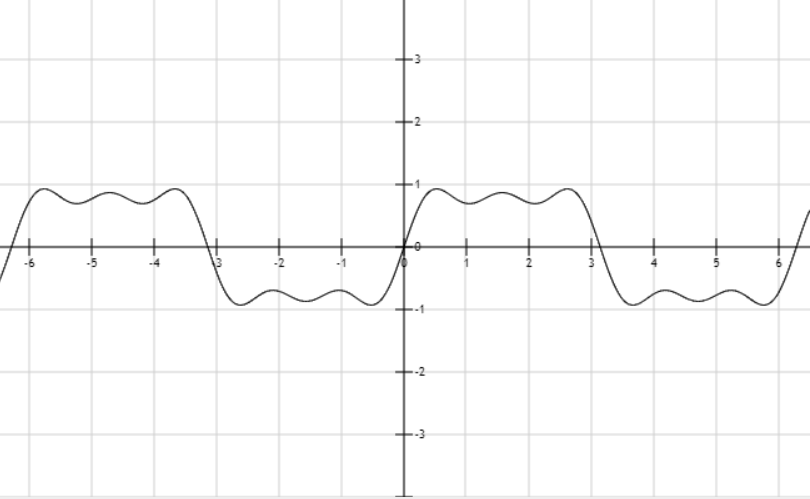 where $A(\omega)$ is still the expression as given in your question and $\phi(\omega)$ is another expression which can also be calculated from the differential equation. It is no surprise, that the response $x(t)$ contains not only the base frequency $\omega$, but also the higher frequencies. Especially, when one of these higher frequencies ($n\omega$) happens to be near to the resonance frequency ($\omega_0$), then the component with $A(n\omega)$ will be quite large. This is exactly what you could observe in the video.

Not the answer you're looking for? Browse other questions tagged newtonian-mechanics harmonic-oscillator oscillators or ask your own question.

2
Help understanding this forced undamped oscillator
6
Is the usually taught solution to forced harmonic motion just a special solution?
0
Why is $x=C\cos(\omega t)$ the solution of $m\frac{d^2 x}{dt^2}+kx=F_o\cos(\omega t)$ though lacking two arbitrary constants?
8
What is the qualitative cause for a driven oscillator to have a max. amplitude during resonance?
0
Intuition behind forced oscillations
0
Physical Meaning of two solutions when asking Angular Frequency of a System as a Function of Amplitude
9
Intuition behind the differential equation for forced oscillations