What about negative Pressure?

Here is something I see : 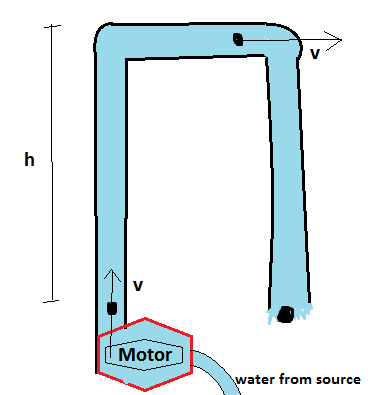 Let's say the ideal fluid(water here) of density $\rho$ is drawn from a source by a motor and thrown upwards with a velocity $v$. Now we take the power of motor be constant and fluid to flow in streamlines (same velocity all over because of same cross section area) ,then applying Bernoulli's Equation for two points shown we get the $$P_{down}-P_{up}=\rho g h$$

which will go negative if $h>10m$. How is it possible?

fluid-dynamics pressure flow
Share
Improve this question
asked May 23 '13 at 16:17

which will go negative if $h>10m$. How is it possible?

It is not possible that $P_{up}$ will go negative. It will experience cavitation. This is one of those cases where you have to realize that the equation you're using is a special case of a larger theory, step back, and employ the larger theory.

If you step back from the concept of water as an absolute liquid, then it's clear that it has a state diagram. Going from some liquid place on the state diagram to $P=0$ will cross a phase transition line. Probably just once, and probably the liquid to vapor line. That means the water boils.

As you hit this threshold of $10 m$ between atmosphere and the lowest pressure point in the system, that point will turn to gas. There will possibly be some significant change in temperature, but we can imagine it happens slowly so everything is held at room temperature. So draw a line on the PT diagram of water of constant T, decreasing pressure.

I have to make some adjustments to your diagram now. Firstly, you imagined an open tube pointing down. I'll have to revise this to a tube that snakes around so that it has a defined level. Take a pipe filled with water and turn the open end down - the water is likely to fall out. We can often ignore this in small (common aquarium) pipes because of surface tension effects.

In addition to that, let's imagine the cavitated area that is now filled with water vapor. I'll, of course, assume your pipe is strong enough. Not to worry, plenty of pipes are. 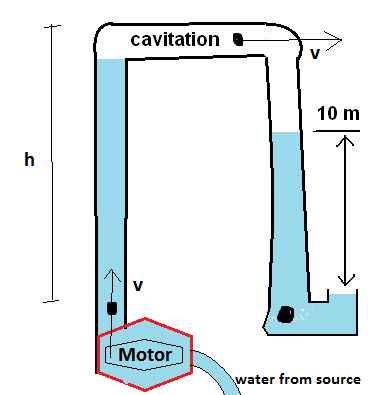 There's some detail that I didn't include. But let's start making observations:

As the pump pushes more liquid through the system, that liquid will overflow through the vapor region and fall down, joining the water in the outlet pipe.

It is possible for the absolute pressure to be negative. When this occurs, we say the water is under tension. If there are weaknesses in the water (air bubbles, interfaces, etc.) then the water will cavitate and you will end up with the situation described by @Alan Rominger. In practice, there will definitely be weaknesses in the water, and, unless you have degassed water, the volume of water where the pressure is less than vapour pressure will become a mixture of water vapour and the gasses that were dissolved in the water.

If the water and pipes are very clean, then water can sustain extremely high tensions (negative pressures) of -30MPa or even more. See here, for example, or here for a more practical flow (degassed water).

will only hold for a standing water column. Definitely not for a free-falling one.

The pump can apply only a fixed pressure/force from downwards . From the open end the atmosphere will apply a fixed force/pressure .

It is only the height of the column which is variable here . If you need height $>10$m , you just need a bigger pump . If you can't get that , the water will rise upto a fixed height say $8$m,after which there will be hydrostatic condition achieved and fluid won't rise any further , pressure can't be negative under any circumstances as pressure isn't the variable here , height is . And height has to determined for a fixed pump pressure .

as an auto mechanic i have seen what i concluded is a "zone" of zero pressure without cavitation in the engine cooling system of many autos. no sciencey stuff just no good reason for a radiator or heater hose to have a soft spot that is lower in temperature than an inch away on either side of the anomalous. usually on the returnside to the water pump, the same water pump that pushes the coolant thru the system has an inlet from the lower radiator hose, a closed system under pressure. thus negative pressure exists even in a closed and pressurized water system. how that fits in with this discussion is as yet a curiosity, but i chose to share my observation with all ya'll. enjoy.

if the negative pressure is due to high velocity, there is possibility of cavitation to occur but

if the negative pressure is due to height, it will just try to suck water, may be form other side or from the same side.

1
Liquid flow in a vertical tube
2
Static Pressure in a Venturi vs a Free stream
7
Why can Bernoulli's equation be applied along two different streamlines for an irrotational flow?
1
If the difference in pressure is zero between two points of a horizontal constant radius pipe, why isnt flow rate zero?
1
Flow in parallel vertical pipes
1
Difference between Pressure and Pressure Energy in fluids
0
Intuition behind Streamlines and Flow
10
Pressure on walls due to streamlined flowing fluid
0
According to Bernoulli's, how is total pressure distributed after complete stagnation on a board?