Discreteness of set of energy eigenvalues

Given some potential $V$, we have the eigenvalue problem

with the boundary condition

If we wish to seek solutions for

I find textbooks like Sakurai and others assert that (without proof) set of all such eigenvalues $E$ that admits nontivial solutions is discrete, which gives us liberty to index them with natural numbers (principal quantum numbers). Can anyone help me with a little elaboration of this mathematical fact ? As a student of mathematics, I know that compact operators have discrete spectrums, so for the operator $ T : L^2 \rightarrow L^2 $given as

Are there methods to show that $T$ is compact? Or possibly other ways to establish discreteness of its eigenspectrum?

All of this because, complementing what you said, the eigenvalues of the problem $T\varphi_k=\lambda_k\varphi_k$ for a compact symmetric operator $T$ on a Hilbert space $H$ with interior product $\langle\cdot\mid\cdot\rangle_H$ are a bounded countably infinite set that converges to zero, $\displaystyle{\lim_{k\to\infty}\lambda_k=0}$. Other (pretty relevant) properties are that the multiplicity of each eigenvalue $\lambda_k$ is finite, and that the set of all eigenfunctions $\varphi_k$ define a complete basis of the space $H$, so that any element $f$ of $H$ can be expanded as $\displaystyle{f=\sum_{k=1}^\infty{f_k}\,\varphi_k}$.

Please note the relevance of the condition $\boxed{\displaystyle{E<\lim_{|x|\rightarrow \infty}V(x)}}$. Consider this next image as an illustration (I've taken it directly from the web, so take the potential $V=U$); as the math is pretty straightforward, I'll go a little more with physical picture this time 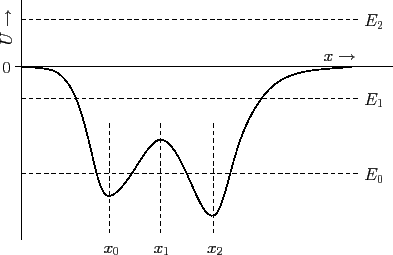 with the condition above, the results found are valid for the equation $\hat{H}\psi=E_i\psi$ with $i=0,1$. Indeed, both equations may presumably be reduced to a regular S-L problem because they would be ones with a finite or penetrable potential well, where we can know the energy spectrum just from $\psi$ inside the potential well, i.e. for a finite interval, whereas considering $i=2$ the interval for $\psi$ would inevitably be infinite and it is evident that $\hat{H}\psi=E_i\psi$ couldn't be reduced to a regular S-L problem and thus the energy spectrum presumably wouldn't be discrete. Feel free to consider any potential you like.

This corresponds to a beautiful analogy with classical mechanics when we find closed or open orbits, which here are bounded and unbounded states (hope I got the translations right) respectively. Think of a massive nucleus and an electron that interact by means of an atractive Columb potential. If the condition above is satisfied, the system may be a hydrogen-type atom that would have a discrete energy spectrum, as known. Although if someone shot the electron against the nucleus from very far away and with enough kinetic energy, the total energy would be positive and the nucleus would deflect the electron without capturing it and without changing it's energy, which evidently is free to take any value. The simplest case for a continuous energy spectrum in QM is that of the free particle, i.e. $V(\mathbf{r})=0,\,\forall\mathbf{r}\in\mathbb{R}^3$; there the normalization condition $\int\psi^*_n\psi_m\,dx=\delta_{nm}$ is not valid and may be generalized using the Dirac delta, also wavefunctions strictly belong to a Banach space.

Not the answer you're looking for? Browse other questions tagged mathematical-physics schroedinger-equation operators eigenvalue discrete or ask your own question.

2
Why the eigenvalues of hamiltonian are discrete in bounded systems (only discrete energy levels)?
0
Do non-vanishing boundaries conditions necessarily force a discrete/quantized set of solutions for the Schrödinger Equation?
0
Why is the set of physically acceptable solutions to the time-independent Schrodinger equation discrete?
1
What is the cause of discrete or quantized energy levels in an atom?
0
Trying to understand why energy must be quantized/discrete
35
Reason for the discreteness arising in quantum mechanics?
13
Must bounded operators have normalisable eigenfunctions and discrete eigenvalues?
10
Bounded and Unbounded (Scattering) States in Quantum Mechanics
3
What is the cause of discrete spectra in quantum mechanics? Both compact Lie groups and bounded Hamiltonians?
3
How to prove bound state's spectrum must be discrete and scattering state's spectrum must be continuous?
See more linked questions

4
Is there some quantum potential producing exponential eigenvalues?
1
The eigenfunctions of vanishing eigenvalues of Dirac operator
2
Continuous vs discrete set of eigenvectors for a single particle Hamiltonian
2
Schrodinger equation subject to boundary condition implies quantization
3
Why do the energy eigenvalues never depend on the position coordinate $x$?