Why does the Time period of a simple pendulum in a lift accelerating upwards change?

[I know this question probably has multiple duplicates. I have seen answers to one question already but wanted to know a bit more]

Edit: Suppose I am in a lift carrying a simple pendulum by holding the plank as shown in the image below. I would feel that my weight has increased due to the floor is applying force on me. So it is obvious that an extra force is acting upon the pendulum too. But isn't this force exactly vertical? How is it affecting the pendulum when it is at the amplitude?

I might have mixed the view with SHM and Non-SHM frames.

I am looking for an intuitive explanation. Thank you.

This part was before the edit.

At first consider the elevator isn't accelerating. So $T=mg\cos(\theta)$. And $mg\sin(\theta)$ is responsible for the oscillation of the pendulum.Now if the elevator is accelerating? The plank with attached string is forced. ( acceleration$=>g+a$ suppose) upwards(at the very beginning). The acceleration due to gravity on the bob will remain unchanged. Now the string and the bob will also be pulled with some force. What will be the respective forces? Will the 3 parts act as a system since all of them are attached to each other?Assuming that all of these parts are accelerating equally and are with respect to ground(earth surface), time period will be $T_p=$2$\pi√\{l/(g+a)\}$.Now my main question is why is this $g+a$ instead of $g$? How is $F$ changing $mg\sin$($\theta$) to $m(g+a)\sin$($\theta$) in the free body diagram? Is $T>mg$ in this case?Well I could understand that this might be explained by consudering that since this system is in $SHM$ so $0°$$\leq$$\theta$$\leq$$4°$, in that case the trajectory of the bob is linear so $T\cos($$\theta$$)=m(g+a)\approx T$.So $T\sin(\theta)=m(g+a)\sin(\theta)$ and ends up as $T_p=2\pi\sqrt{l/(g+a)}\}$ But is this mainly due to only $SHM$ or it is naturally the way it is even if the motion is not $SHM$. 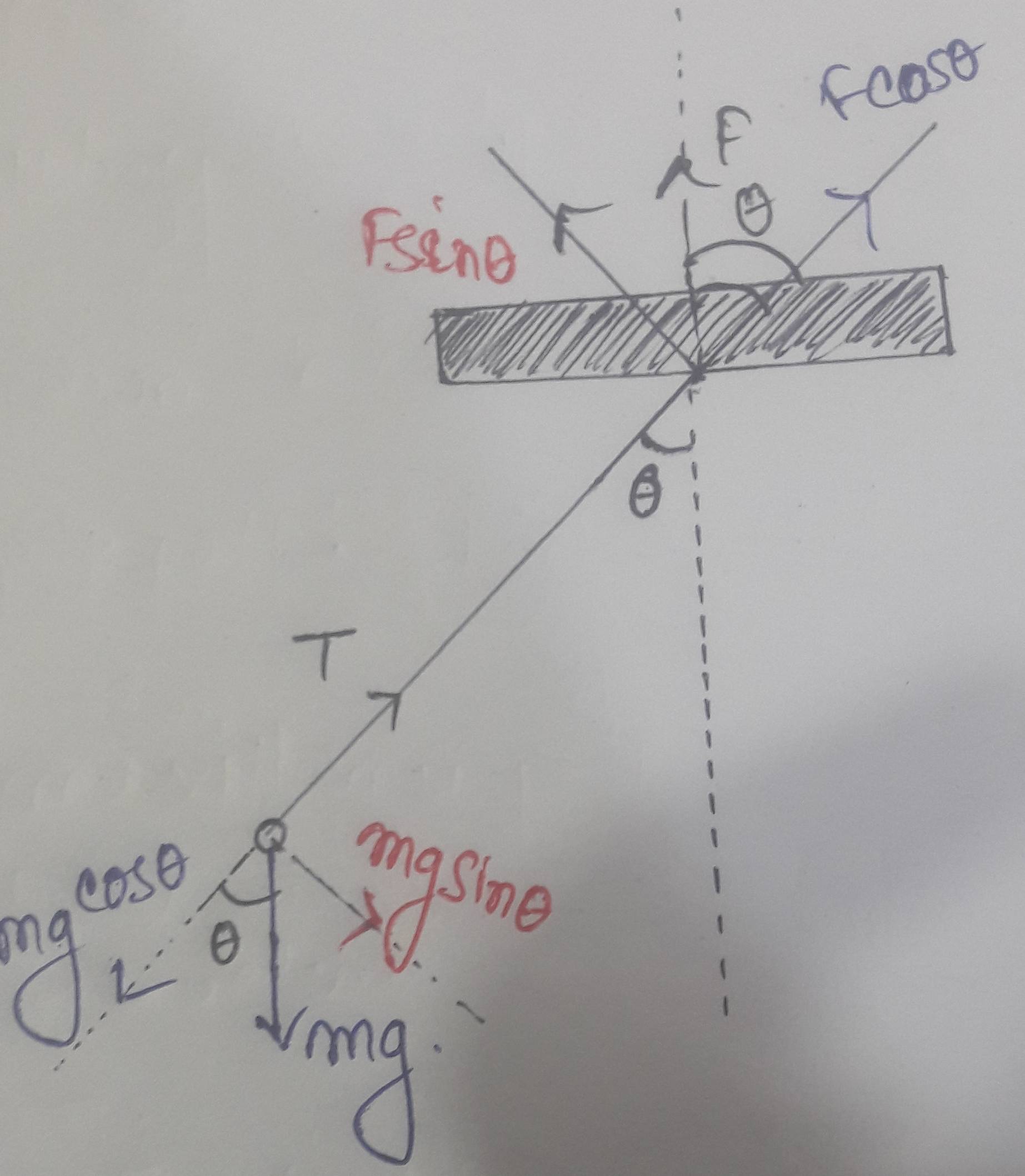 Let's consider the direction along the string. According to your image we can say $$T-mg\cos\theta=m.a\cos\theta$$ , because the acceleration along the string is $a\cos\theta$. By solving that we derive, $$T=m(g+a)\cos\theta$$ Thus it is not an unusual thing that $g$ becomes $(g+a)$. Also it has to increase because there must be an extra force to accelerate the bob vertically upwards, despite its SHM. (Note that what happens if $a=0$).

Not the answer you're looking for? Browse other questions tagged newtonian-mechanics reference-frames inertial-frames string oscillators or ask your own question.

2
Where does this derivation of the equation of motion for a simple pendulum go wrong?
1
Pendulum in Accelerating Elevator
1
The $r$-component of the Total Force on a Simple Pendulum
0
Does the mass of a pendulum string affect the amount of force required to hold it at a specific location?
1
How can we explain the infinite time period of a simple pendulum in an artificial satellite from ground's frame of reference?
2
How does an observer outside an accelerating body rationalize the effects of pseudo force?
1
Problem regarding components of forces in conical pendulum
1
What is the acceleration magnitude of a simple pendulum?