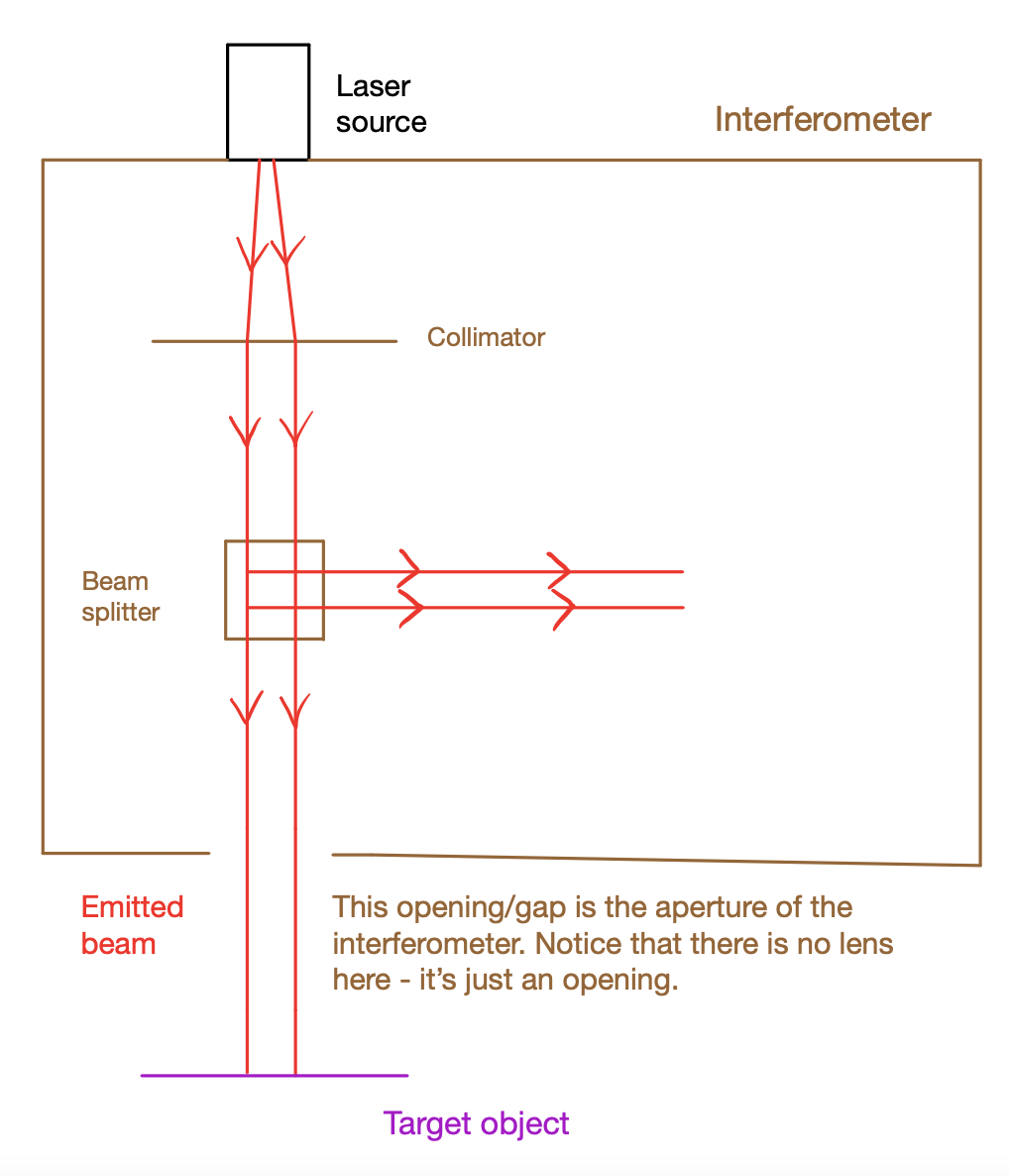 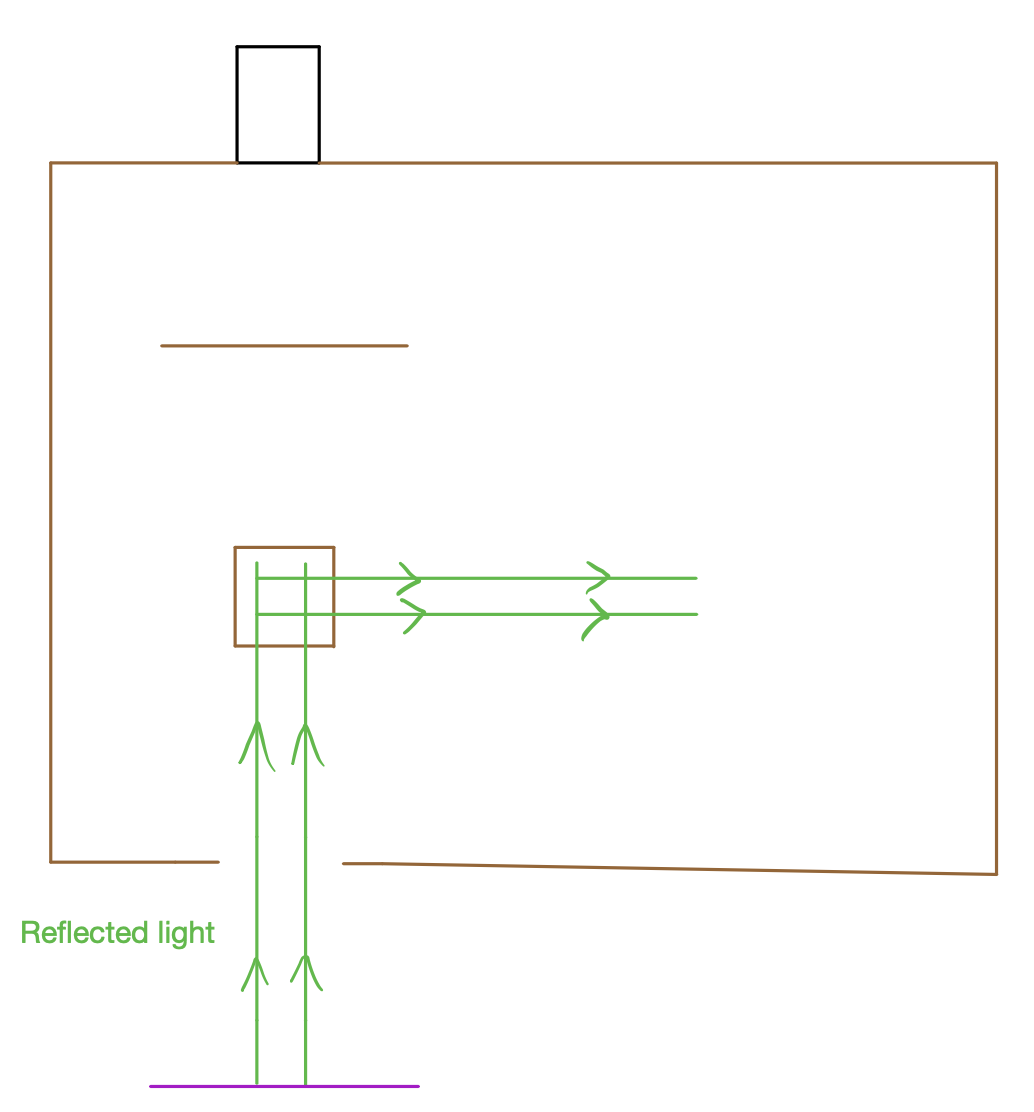 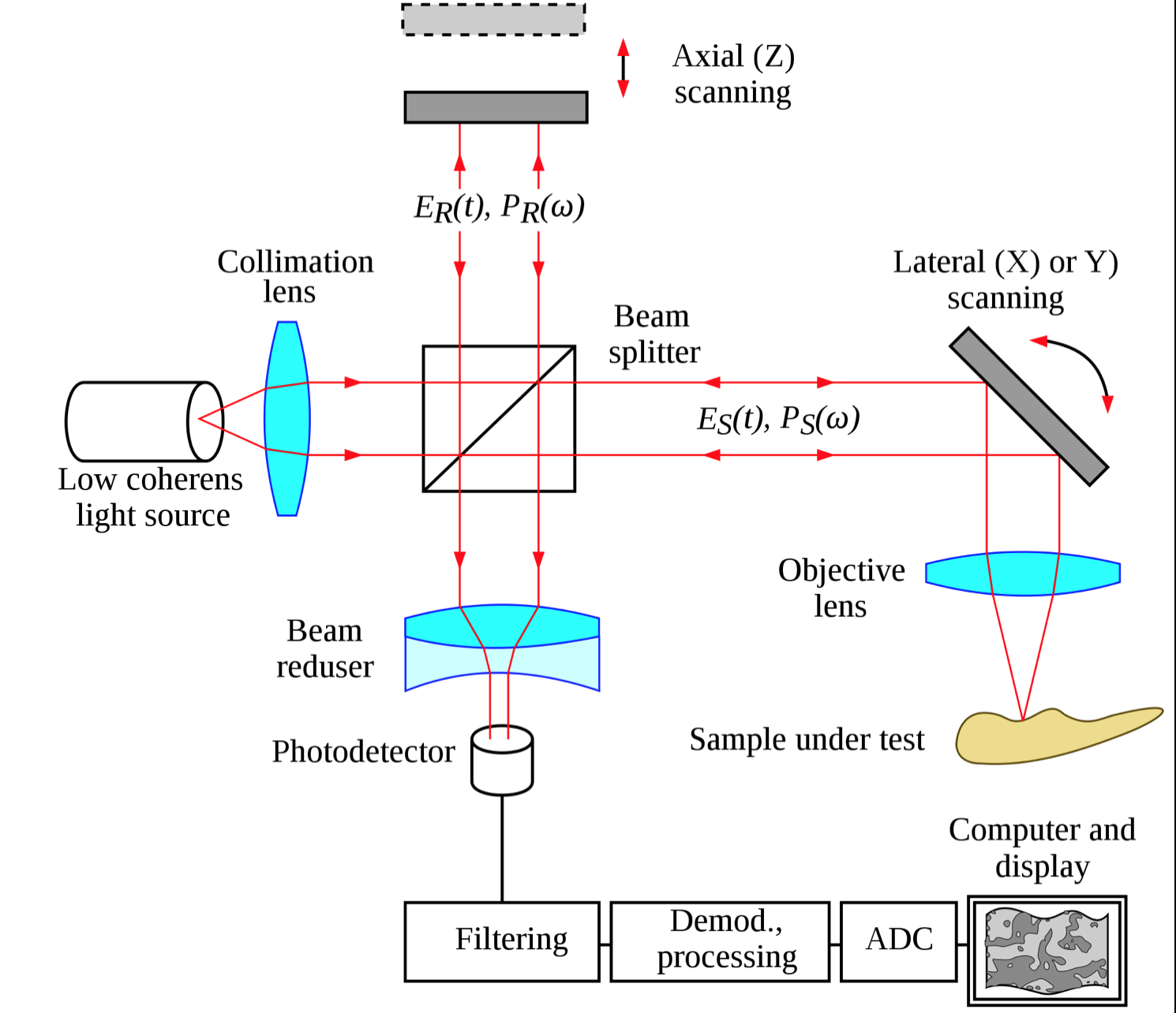 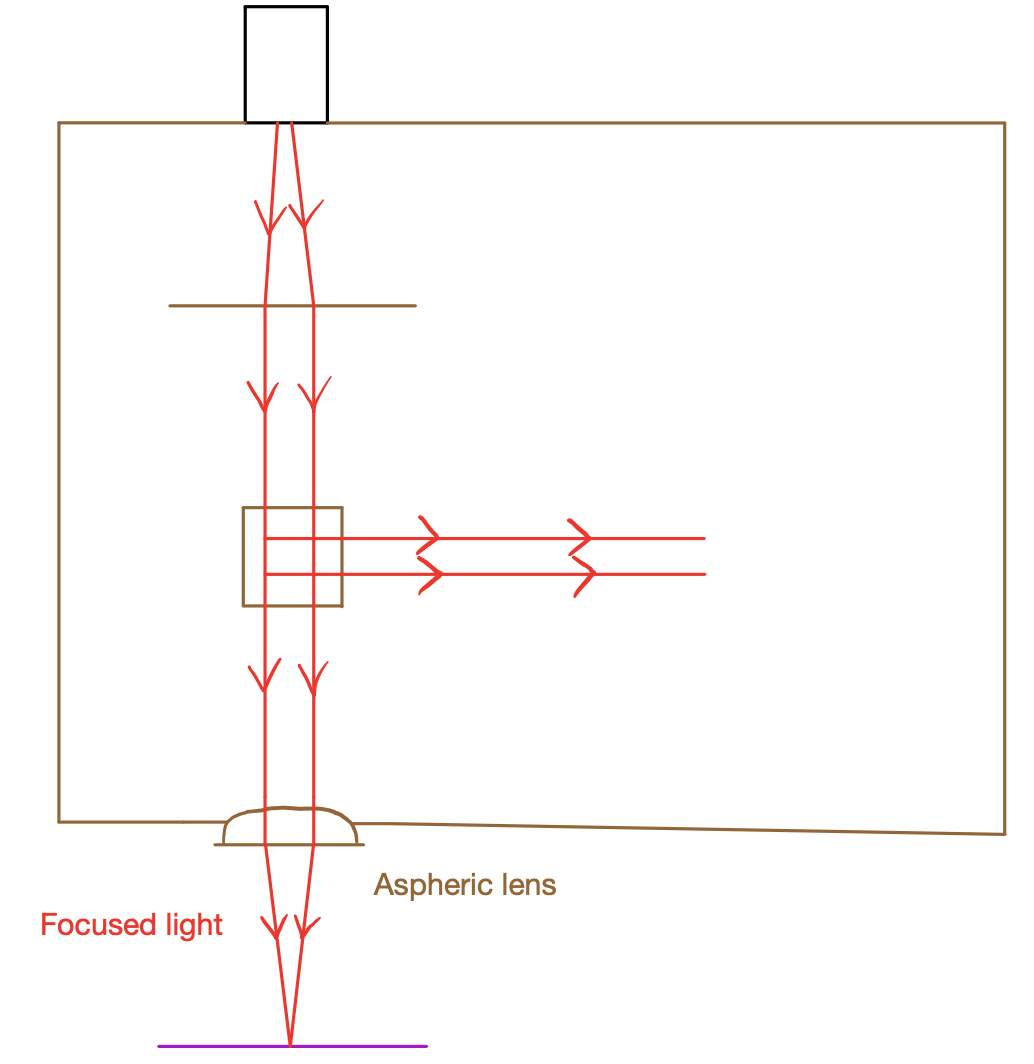 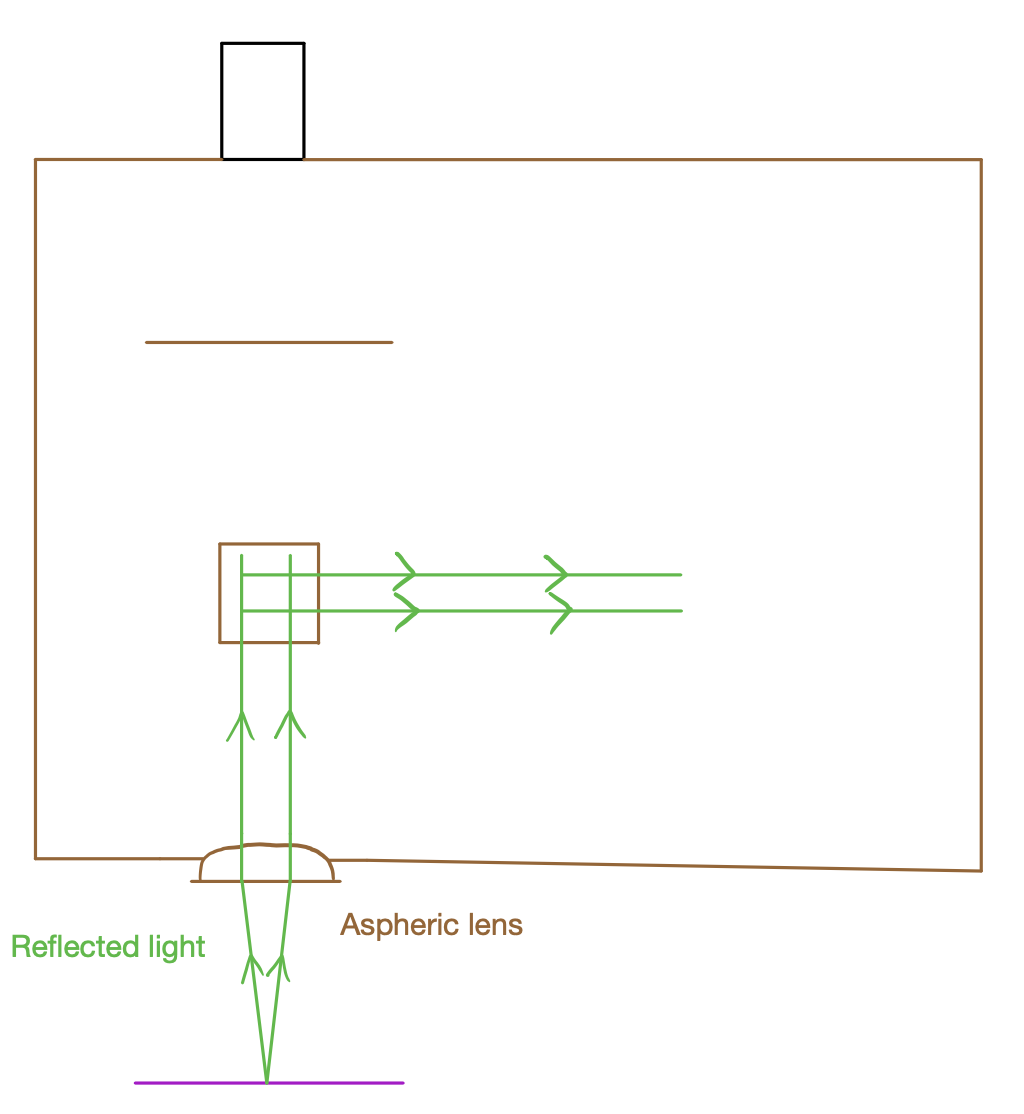 But I had an idea to get around this. Since I'm using a spatial filter with aspheric lenses (see slides 13/14 here) immediately after the laser source in order to collimate the beam and get it to a high quality state, and since a collimated beam is, as I understand it, always in focus, can't I simply just emit the collimated beam over the varying distances as the target object moves (as shown in the first two diagrams), rather than having the fixed-focus optics (the aspheric lens) at the aperture of the interferometer (as shown in the last two diagrams)? It seems to me that, as long as the beam is relatively well-collimated (which it should be from the spatial filter), and as long as the distance isn't too far (which, for 10-100cm, it shouldn't be), this would mean that the beam will be in relatively good focus when incident upon the target object.

If I understand your question, you could just use a collimated beam exiting from the interferometer. However, you don't clearly state what is the "aperture" of the interferometer. I assume you mean the arm that leaves the beamsplitter cube at 3 oclock, this is commonly called the "test arm". But, if you use a collimated beam, there are a lot of issues that may prevent the interferometer from doing what you want it to do. If the target region where the test arm beam hits has multiple regions that differ in height by several wavelengths, then the signal back to the interferometer will consist of not just one, but several wavefronts. These multiple wavefronts may (i.e. likely will) constructively or destructively interfere. This means you'll get a mixed result for the interference signal. You will sacrifice spatial resolution in the direction perpinducular to the probe beam.

If your source has very low temporal coherence, you'll have to move the reference arm in z in order maintain interference between the test and reference arms. This is what most OCT setups do. In general, any interferometric measurement device (whether OCT or not) is a compromise between resolution and range. I would recommend looking in the literature to find how people configured systems that measured the range you want.

Not the answer you're looking for? Browse other questions tagged optics laser interference lenses interferometry or ask your own question.

3
How does the quality of the reflected light compare to the emitted light? And how do I manage this (reflected) light quality well?

3
Why do spatial filters use microscope objectives, and not other types of lenses?
3
How does light behave after experiencing fully destructive interference, as in an interferometer?
4
Optics to correct focal distance across a plane
0
Laser spot size change through a beam expander
0
Ghosting/Unwanted refection with cube beam splitter
1
Interferometry: effect of aspheric lens on self-mixing effect
0
Do interferometers require equal-powered (or as equal as possible) beams being emitted at the target and the photodetector(s)?
3
Does an aspheric lens require that the incident light be collimated in order to focus it?