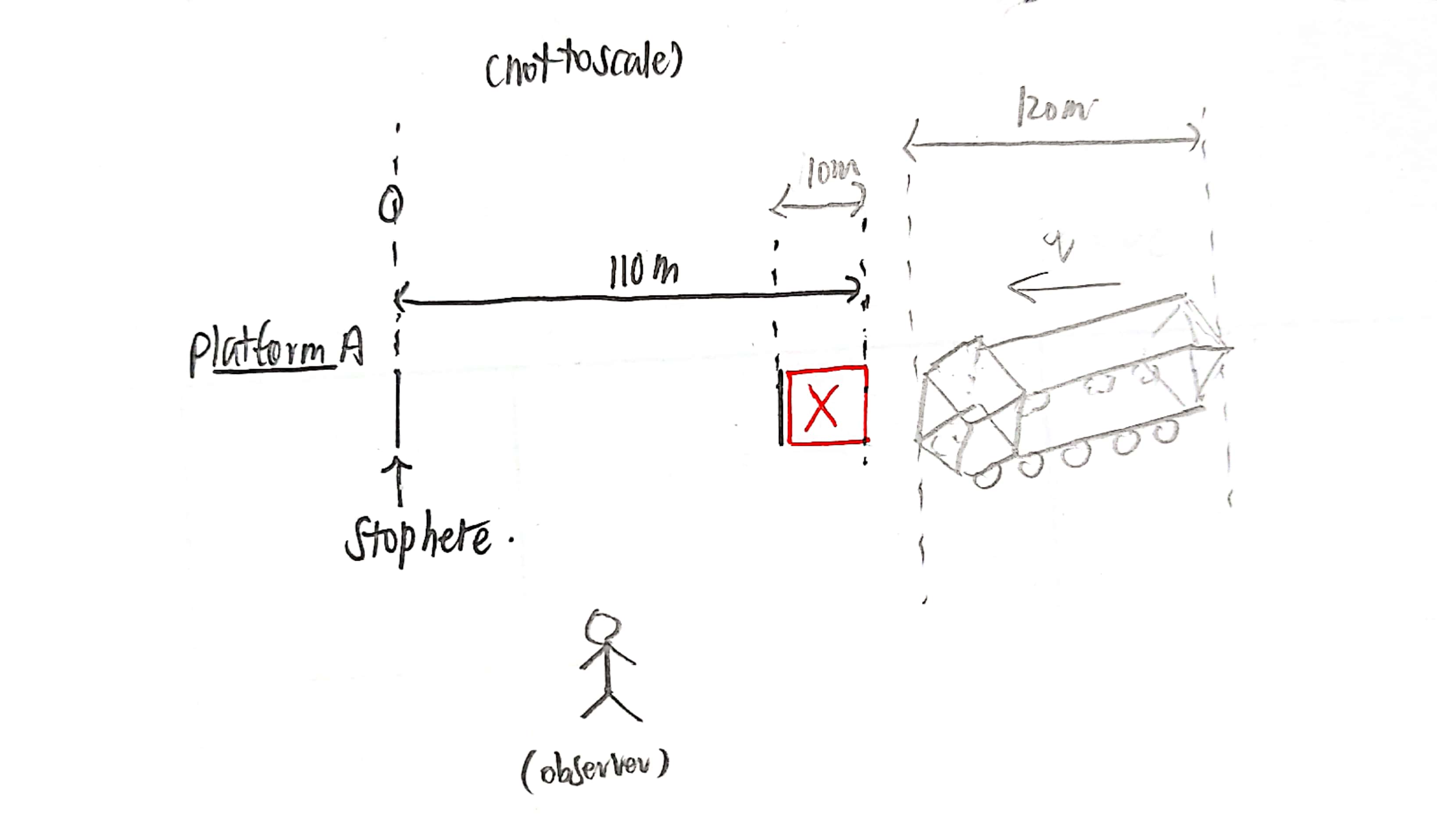 Hi I have been reading up and trying to understand special relativity. I've thought of this question and I am not quite sure what I am not understanding right. Disclaimer: I'm quite new to this topic and I apologize if it does not make sense!

Context to my question

In this scenario, we have a train of length 120m travelling towards the platform at a certain speed such that length contraction is significant. The red box marked with an "X" is a 10m piece of track contains a pressure bomb that will explode if the train is no longer in contact with the track. The total length of the platform including the "bombed track" is 110m.

At the end of the platform, it is indicated by the arrow "stop here".

However, if we now take the reference frame of the moving train, the captain in the train will not see itself and the train as being contracted, but rather the surrounding train track that moves relative to him will be contracted. Thus, what he will see is that the total length of the platform now contracts by the same amount of 20m thus becoming 90m, while his train remains the same length at 120m. Thus, when he reaches the end of the shortened track, the back of the train will still be in contact with the red piece of track (Since 120m train > 90m total track length). Therefore, the bomb from his perspective should not explode.

I have tried to illustrate your description of what I believe to be different situations (or Stop conditions as you describe it) from the point of view of (the Front of the train). An observer on the ground (platform). 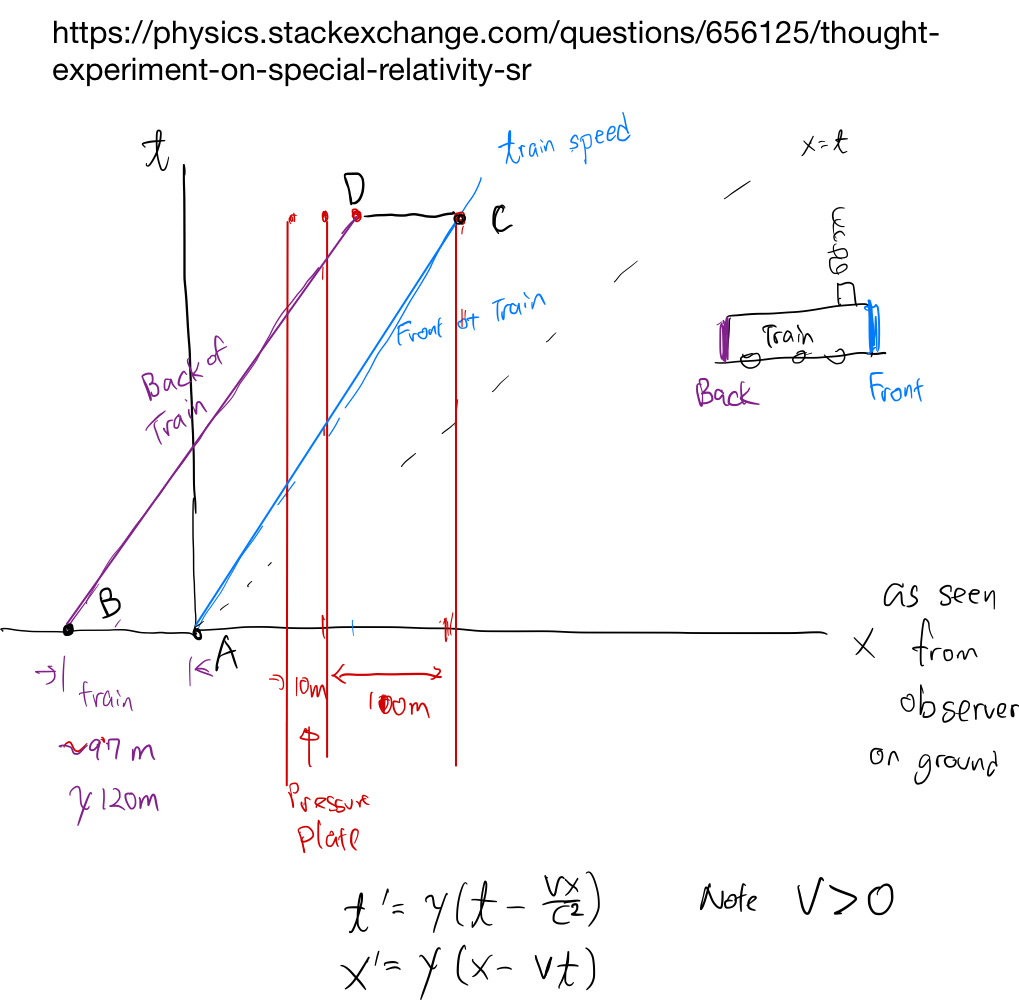 Now look at the second diagram where we have Lorentz transformed everything to the Train’s point of view, first of all the train is a bit longer now and platform is a bit shorter (including the pressure plate), but more importantly look at where B is now, it’s actually at a different time as A. The back of the train at t=0 from the ground’s perspective is not simultaneous as A when viewed from the train’s perspective. So C, D is the event as viewed from the ground’s perspective but what you are describing in your second situation is actually C, D’, NOT C, D. 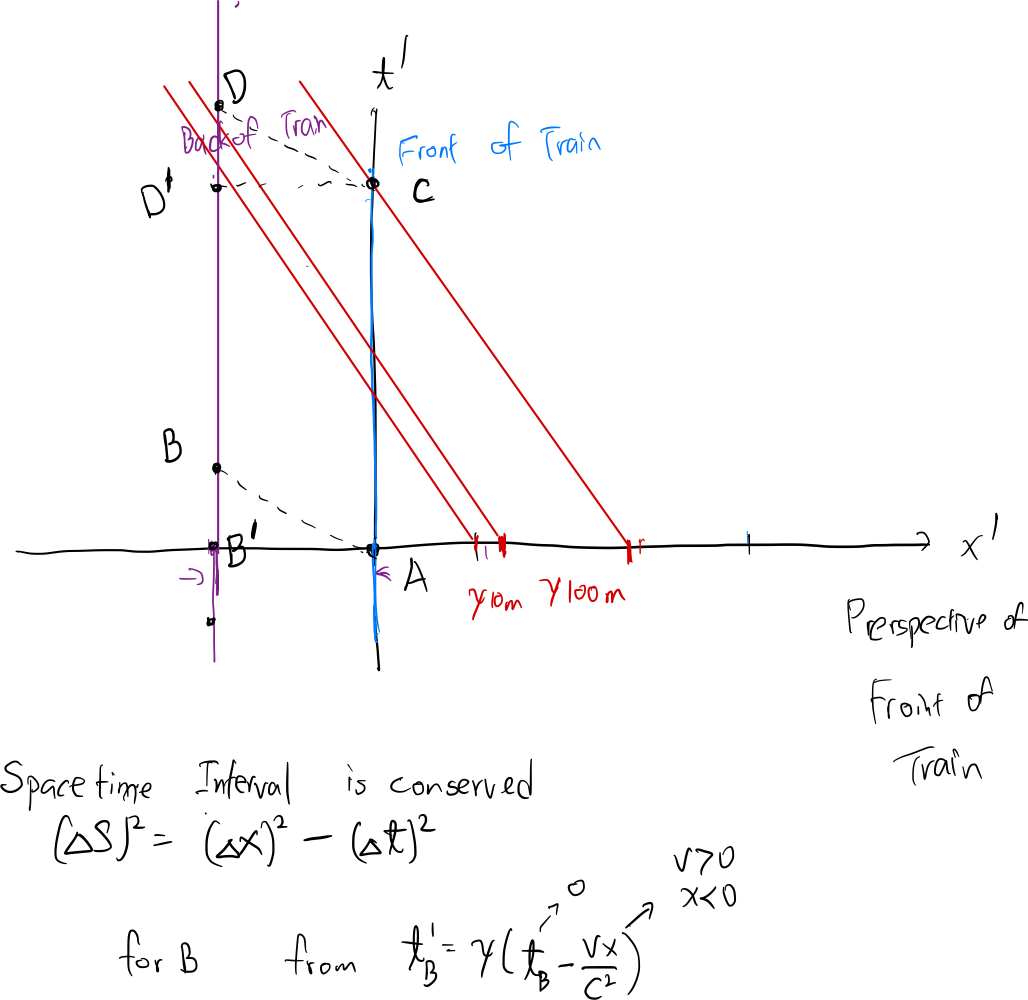 I’d like to emphasize that the reason for your confusion is because It’s not just length that changes but time as well and that simultaneous events in one picture are often not in another inertial frame. In this case, every part of that train is at a different time coordinate depending on who the observer is because they are at different positions.

I hope that helps with the confusion, if anyone can spot any errors please let me know and I’d be happy to edit the diagrams.

Not the answer you're looking for? Browse other questions tagged special-relativity thought-experiment or ask your own question.

1
Einstein's Famous Thought Experiment Contradiction
1
Special relativity-measuring a lorentz contraction as reference frame changes
1
A big confusion regarding to the 2 thought experiments of Relativity of Simultaneity leading to other confusions
2
Special Relativity - Regarding the Simultaneity of Events During the Train Paradox
1
Calculations in the Relativity of Simultaneity Train Thought Experiment
1
Relativistic time contraction? A thought experiment
6
Is the statement "The deactivation sensor sends a signal to disarm the bomb" frame-independent in the train-tunnel paradox?
2
Confusion over length contraction in special relativity