When filling a bottle, why is the level after an overflow lower than the top?

If I mistime it so that the water overflows, and then turn off the tap, the resulting level in the bottle is below the brim, often by a decent margin.

The same effect can be observed filling up a saucepan or bowl, so it doesn't seem to be the shape of the container. My instinct is that something to do with viscosity or surface tension means that some water is carried away with the overflow, but I don't have the knowledge to tell if this makes sense.

There are two effects that both reduce the final water level: 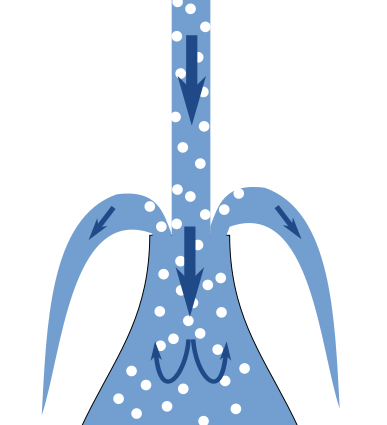 When the water is pouring into the bottle and back out of it, it does not immediately turn around at the surface. Instead, the kinetic energy of the water causes it to flow quite deep into the bottle, then make a turn and flow back upwards.

When the incoming flow stops, the remaining water in the bottle still has that kinetic energy, and will continue flowing upwards and over the rim for a short time.

Depending on the faucet, the water flow usually has also entrapped air bubbles, which make it appear white rather than clear. Once the flow stops, the larger bubbles quickly rise to the surface and pop, further lowering the water level.

Just for fun, I took a slow motion video of filling a bottle (slowed 8x). With my faucet, it appears the contribution of air bubbles is quite large.

You could be right about the surface tension taking some extra water with any that's overflowing.

Also a wave would occur on the surface of the water, starting from the middle, due to the disturbance of the incoming water. When this stops the wave continues and the crests will be higher than the average surface and can carry more water over the edge.

I recommend you to read the edit below, first

Let me explain a little bit what happens when you fill the bottle. When the water from the tap hits the water level, the surface water becomes turbulent. So a transverse wave is formed. There is a trough at the point where the water hits. So the middle part is always below the edge. As a result, more water drains away near the edge.

Then let's look at your observation. What is meant by you turn off the tap timed well? It means you are slowing down the speed of the water when the water level reaches the edge. So the water hits the surface more slowly when the bottle is near to be filled. Then the amplitude of the transverse wave becomes smaller. So the middle part of the water also rises a little bit more than before. Then it is nearly filled.

However, you are right to say that this can be explained with aid of surface tension. But it is easier to demonstrate as following: Take a bottle cap and pour water slowly into that. When you feel that the water is about to overflow, stop filling it. At this time, water surface should be convex shaped, if you filled it up to the brim. Now scatter some gold dust (or whatever similar) above the water surface. Now drop the final crucial droplet. If someone is doing this for the first time, he may expect an amount equal to the last drop should overflow. But in reality he observes more water drains, with more gold dust.

Now let's analyze. When you filled the cap up to the brim, it means the surface tension is maximum. Then if you add another droplet, surface tension will be broken. Then water overflows. But the draining water particles do not go away alone. Also they drag the water particles near them. The reason is cohesive and adhesive forces among water molecules-water molecules and water-outer surface of the cap. Eventually more water will be drained.

Special Note: Conserve water by turning off the tap at the right time :)

I just filled containers of glass, plastic, and metal with water. By finishing with a small smooth stream, I was able to achieve a final water level which was above the rim of each container. I have heard this attributed to surface tension.I would attribute any other result to the momentum of the incoming flow.

Not the answer you're looking for? Browse other questions tagged fluid-dynamics water or ask your own question.

6
About an upside down cup of water against atmosphere pressure
1
Velocity of water from tap to fill a cracked bucket to brim
2
How to maintain the level of water in a container that receives liquid from a reservoir that has one exit?
3
When you fill a bottle with water then liquid nitrogen then turn it upside down, why does it blast off at high speed?
0
Why does the pressure inside a pipe momentarily increases when the tap is closed?
7
Why did water not drip form this small bottle?
19
Freezing water: in layers or all at once?
65
Why was water freezing almost instantaneously when shaking a bottle that spent the night outside during a frosty night?