Diameter of the universe [duplicate]

Should the diameter of our universe always be more than its age in light years?

As if the distance between any two points in the universe is equal to 13.5 billion light years then the light from the big bang could also reach there and certainly more length than its age in light yrs would violate the very basic laws of our universe.

Firstly, the light year measures distance, and not age. But I see your question here: "Can the radius of the universe(in ly) be more than its age (in y)?"

The answer is (surprisingly) yes. In fact, this is indeed the case.

Firstly, a little side story:

This is something that confounded Einstein himself, way before we even knew about the Big Bang. When he had almost finished developing his theory of General Relativity, he realized that his field equations would not allow for the universe to be static -- it would be unstable and end up a "reverse big bang" or some similar apocalyptic event. While we now know that the universe is probably not static, at the time this idea was abhorrent to him, and he introduced a term to the equation, involving a "cosmological constant". It's basic physical interpretation was a net energy density (positive or negative), inherent in spacetime when all other energy and influences are removed from the area.

After a while, it was discovered that our universe was indeed not static, and Einstein (hastily?) abandoned the cosmological constant. At the time, he called it his "biggest blunder".

Now, later on, it was discovered that not only is the universe expanding, it is accelerating

OK, now back to your question. Firstly, relativity forbids information from being sent at a speed faster than light. It has nothing against objects which cannot be used as FTL communication channels going faster than light. An example is that you can make a dot of light from a laser pointer move as fast as you wish.

Now, cosmological inflation doesn't have to do with object moving away from each other. They only appear to move away, it is actually the fabric of spacetime that is stretching. Something like this: 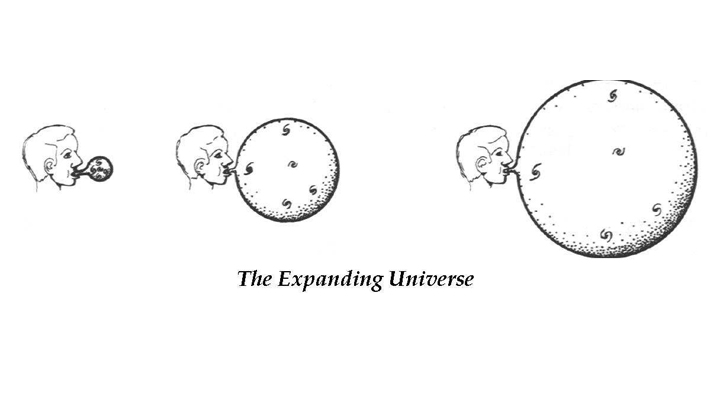 Can this be used to communicate? Nope. The universe expands due to its own properties, we cannot affect that. While moving stars around and creating gravitational waves in spacetime will cause local disturbances, these will only superimpose with the expansion and will not travel faster than the speed of light 2.

So it's not a violation of our basic principles if the universe expands faster than light.

And as I mentioned in the beginning, this is indeed the case. During the Big Bang, expansion was so fast (a factor of $10^{60}$ in the first $10^{-20}$ seconds if I recall correctly) that it would have definitely broken the speed limit. And in the present day there are galaxies which move away from us at speeds greater than $c$.

How do we see these galaxies? The motion of the galaxies now doesn't affect the light it emitted billions of years ago. And we know enough about expansion (there are simple calculations that can be done with the Hubble constant), to tell us how fast the galaxy will be going now.

A simple rule of thumb is that the further away two galaxies are, the faster they retreat from each other. This comes from the Hubble law, $v=H_0\times d$ ($v$ is velocity, $d$ is distance, $H_0$ is the Hubble constant). There are enough galaxies with a distance between them such that $v>c$.

If you take two galaxies at opposite ends of the universe, their relative speed will be definitely more than $c$, and so the length of our universe in ly is greater than its age in y, though this doesn't contradict any law.

The interesting thing about these two is that though $H_0$ is decreasing, the cosmological constant predicts that the acceleration is expanding.

Wikipedia explains this better than I could:

Current evidence suggests the expansion of the universe is accelerating [snip], meaning that for any given galaxy, the recession velocity dD/dt is increasing over time as the galaxy moves to greater and greater distances; however, the Hubble parameter is actually thought to be decreasing with time, meaning that if we were to look at some fixed distance D and watch a series of different galaxies pass that distance, later galaxies would pass that distance at a smaller velocity than earlier ones. [Source]

1. In layman's terms: if spacetime had a net 'leftover' energy density, it would repel itself, causing acceleration

2. Hopefully a more knowledgeable answerer can quantify this statement.

Not the answer you're looking for? Browse other questions tagged cosmology space-expansion faster-than-light observable-universe or ask your own question.

59
Why is the observable universe so big?
5
Can a dot of light travel faster than the speed of light?