What is the distance traveled 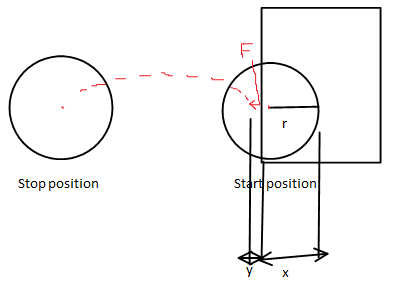 the red dots represent a side view of path traveled, F is downward force and the tool used here is a pen placing parallel to the coin

I have newly started to study mechanical physics. based on study, I conduct a simple experiment. But unfortunately I am unable apply the laws in reality.

Experiment: I placed a coin (2 Indian Rupee coin) with radius $r$ positioned flat part of coin parallel to base of my laptop. Also placed at edge of base such that $x$ (mm) of diameter of coin is supported by laptop while $2 r - x$ is free, unsupported with the coin in a balanced position. Now at $x+y\, <\, 2 r$" measured along diameter of coin toward the free end I applied a random force perpendicular to laptop base.

Now my question is , how can we compute(formulate) distance $z$ traveled by coin measured from center of coin at start point to center of coin at the place it stopped in terms of known variables mentioned below.

Here for simplicity I have not considered the torque generated, air resistance, and visualized the traveled path as a simple parabolic path. Now I can measure the distance traveled $z = v_0t+\frac{1}{2}gt^{2}$. where g is acceleration due to gravity.

But how can I find the initial velocity $v_0$. I know $v_0$ is not zero, since the situation here is not equivalent to a freely falling scenario.

This problem has four separate regions of operation