While studying the semi-empirical mass formula for nuclei, I came across an "asymmetry term" whose function, as far as I understand, is to build in the fact that nuclei "prefer" to have equal numbers of protons and neutrons. This is explained by the Pauli exclusion principle; the neutrons and protons are distinguishable, and hence have fill separate energy levels. Hence, if the number of neutrons and protons is close, the nuclei will have a smaller energy.

Yet, it is observed that large stable nuclei have more neutrons than protons. Why is this so? If nuclei prefer to have equal protons and neutrons, shouldn't the stable nuclei lie along the N=Z line? (in the image) 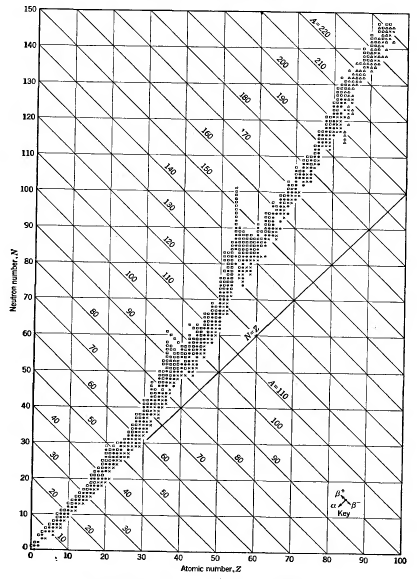 Well, look at the other terms...in particular consider the Coulomb term as that one depends only on the proton number.

At some point this contribution begins to outweigh the energy demands of the neutron degeneracy.

Neutrons are subject to the strong force, holding the nucleus together, but not to the electric force, which pushes only the protons apart. In that sense, it's more stable for a nucleus to have a few spare neutrons to space the protons apart and keep them stuck together.

Not the answer you're looking for? Browse other questions tagged electrostatics nuclear-physics neutrons protons strong-force or ask your own question.

9
If protons and electrons had similar masses
7
Evidence that nuclei contain neutrons and protons (other than nucleons appearing if a nucleus is smashed)?
3
Basic questions about the strong force
21
Are protons and neutrons affected by the Pauli Exclusion Principle?
21
Can there be an atomic nucleus where there are more protons than neutrons?
2
Pauli exclusion principle: why does it imply that $Z\approx N$ in stable nuclides with $A<40$?
4
Filling order in the Shell Model of the nucleus