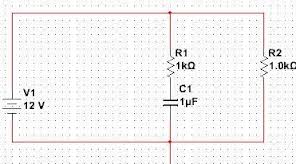 If there was no capacitor, I know I could replace the resistors by an equivalent one. My doubt is, do this continues to be true in this case? I mean, can I replace this configuration by one capacitor with one resistor in series such that this resistor is equivalent to the other two? If we can, what's the argument beyond this?

I mean, can I replace this configuration by one capacitor with one resistor in series such that this resistor is equivalent to the other two?

The answer is actually no.

The equivalent impedance of the circuit you describe is:

This can be expressed as the sum of a real part and an imaginary part but the real part involves the radian frequency $\omega$.

So, although we can write the above as the sum of a real (resistive) part and an imaginary (reactive) part, the real part acts like a frequency dependent resistor.

If your circuit were to be operated at a single frequency, then, in that limited context, the answer is yes, one can replace the two resistors with an equivalent resistor for that particular frequency.

Impedance is a complex number that acts like resistance. The impedance of a resistor is just the real number $R$ corresponding to it resistance. The impedance of a capacitor with capacitance $C$ is the complex number $Z_\mathrm{cap} = 1/i\omega C$, where $\omega$ is the frequency of the input voltage signal. (NB: electrical engineers like to use $j$ to represent the imaginary unit rather than $i$. The Wikipedia article uses that convention.)

Not the answer you're looking for? Browse other questions tagged homework-and-exercises electric-circuits capacitance electrical-resistance or ask your own question.

0
Doubt on the analysis of $RC$ circuit
11
Detecting if resistances are parallel or series in complex circuits
8
$Q$ factor of parallel RLC circuit in series with a capacitor and resistor
3
Capacitors and Resistors - Series or Parallel?
0
Short circuit in superposition
1
Equivalent DC circuit with charged conductors
3
Equivalent circuit capacitance and inductance