Why could we only divide the displacement $x$ into arbitrarily many subintervals instead of dividing the force $F$ when calculating the work done? [duplicate]

The definition of work done in moving the object from a to b using integral is $$W=\int_{a}^{b}f(x) \,dx$$ where the force F is a function of displacement x, namely $F=f(x)$

However, the second work done formula $W=\int_{f(a)}^{f(b)}f^{-1}(F) \,dF$ is wrong! In terms of Methematics, we can see from the F-x graph that $$W=\int_{a}^{b}f(x) \,dx=bf(b)-af(a)-\int_{f(a)}^{f(b)}f^{-1}(F) \,dF$$ This is the property of integral of any inverse function. But in terms of Physics, I think that I use the correct idea of integration to find work done. Because with respect to displacement x, the upper limit and the lower limit of the definite integral are a and b, respectively, which means that the object is at the point x=a in the beginning and at the point x=b in the end. With respect to to force F, the integral also makes sense to me, since the upper limit and the lower limit are f(a) and f(b), respectively, which represents that in the beginning, the force is F=f(a) and in the end, the force is F=f(b).

My question is: what's wrong with my second 'fantastic' idea work done formula $W=\int_{f(a)}^{f(b)}f^{-1}(F) \,dF$? Why could we only divide the displacement x into arbitrarily many subintervals instead of dividing the force F? Can anyone help me out? Thank you so much!

Your second way of doing it gives the same answer as the first if the relation between $x$ and $f(x)$ is linear.

In the top diagram the areas (circled 1 and circled 2) are the same, both 8 units. 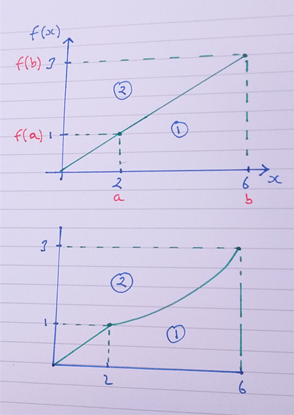 However if the relation is not linear it's possible that the two ways give different results, as the areas are different, as shown in the second diagram.

1
Is work done against a field when the forces match?
1
How to study the work done by a varying force on a system moving in two dimensions?
1
Why do we use a calculus based approach for calculating the work done when a charge moves a certain distance in a system of two charges?
1
Why isn't the work done by gravity positive in this situation?
1
Why is work done not equal to force times time?
1
When is work done by static friction force positive and when is it negative?
0
Can you easily calculate work done by a force when you have force as a function of time?
0
Why is the magnetic force not doing work on the falling current carrying wire?