I am building a computational model of ellipsoidal cell network formation and I would like to use a particle order parameter to study my model's behavior. I have come across this article Steinhardt, Nelson, Ronchetti, PRB (1983), that was apparently the one that started everything, but the math is quite exotic for me. I have found that the formula:

is the order parameter for a 3-D system. This is convenient as S = 0 means no order, while S = 1 means complete alignment. A colleague at the univ has mentioned that for a 2-D particle system the previous equation for S becomes:

but I don't think this can be right, as in the following example: 2 particles have a 90 degree angle between them, so they are completely unaligned. cos2θ = cos2*90 = -1 which would imply they are completely aligned, which is wrong. Also, the range is [-1:1] instead of 0 < S < 1.

I would really appreciate it, if anyone could point me to the right direction. 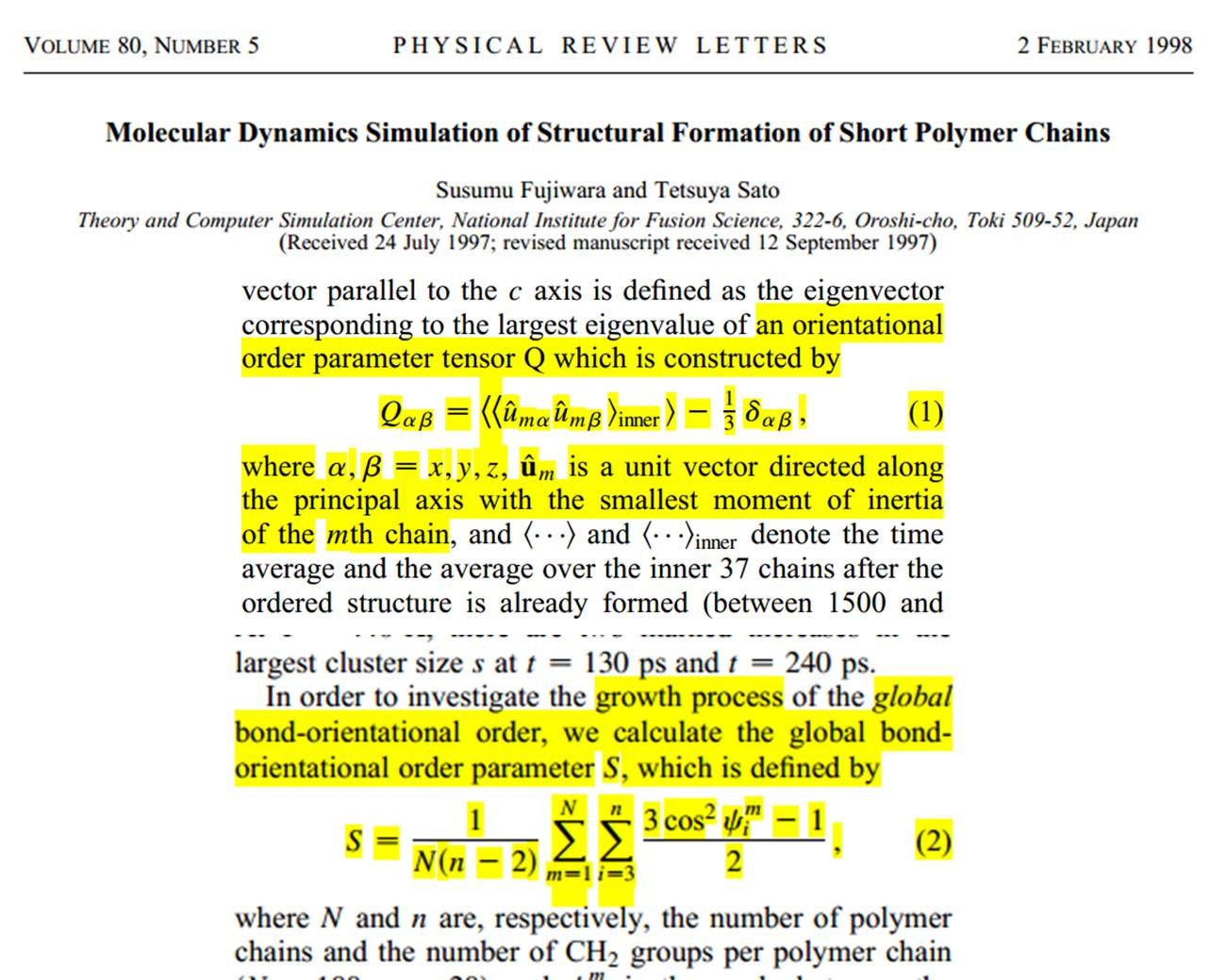 I realize that this question was asked some time ago but I looked at this page when I was trying to figure this out in the context of 2D liquid crystals.

In this article PhysRevE.67.031608 an order parameter is given for a 2D system. Originally, it was introduced by Halperin and Nelson. It is the absolute value of the sixth Fourier component of the bond angle distribution function, which is constant in the isotropic fluid and consists of six equally spaced peaks in the solid phase. It is given by:

The angular brackets indicate the configurational average and $\theta_{mn}$ is the angle between some fixed axis (e.g. x or y) and the bond joining the m-th particle with a neighboring n-th particle. $N_b$ is the number of particle-neighbor bonds.

The local bond-orientational order parameter is:

that is the order parameter of a single particle. $|\Phi_6|$ and $|\phi_6|$ produce a number between 0 and 1 that represents the orientational order.

I guess this answers my question.

The only question I have now is if the input angle $\theta_{mn}$ needs to be in radians or degrees. I have tried some mock examples by hand and I couldn't understand my own results! Any help would be appreciated!

EDIT: I have come to this answer by reading about the "hexatic" phase of fluids, nematic liquid crystals and the two dimensional melting. As to how feasible these are to use in my research, remains to be seen.

Not the answer you're looking for? Browse other questions tagged phase-transition or ask your own question.