How and why do accelerating charges radiate electromagnetic radiation?

Let's consider it case by case:

Case 1: Charged particle is at rest. It has an electric field around it. No problem. That is its property.

Case 2: Charged particle started moving (it's accelerating). We were told that it starts radiating EM radiation. Why? What happened to it? What made it do this?

Follow up question: Suppose a charged particle is placed in uniform electric field. It accelerates because of electric force it experiences. Then work done by the electric field should not be equal to change in its kinetic energy, right? It should be equal to change in K.E + energy it has radiated in the form of EM Waves. But then, why don't we take energy radiated into consideration when solving problems? (I'm tutoring grade 12 students. I never encountered a problem in which energy radiated is considered.)

A diagram may help: 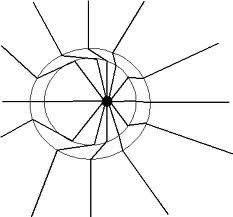 Here, the charged particle was initially stationary, uniformly accelerated for a short period of time, and then stopped accelerating.

The electric field outside the imaginary outer ring is still in the configuration of the stationary charge.

The electric field inside the imaginary inner ring is in the configuration of the uniformly moving charge.

This transition region propagates outward at the speed of light and, as you can see from the diagram, the electric field lines in the transition region are (more or less) transverse to the direction of propagation.

Charged particle is at rest. It has an electric field around it. No problem. That is its property.

Charged particle started moving (it's accelerating). We were told that it starts radiating EM radiation.

If one observe an electron beam in a vacuum chamber hardly one will observe that the electrons slow down (except the change of velocity and direction from the earths gravitation). Since there is no decrease of the speed of a constant moving electron there wouldn't be any loss of energy, hence the electron does not radiate. So you are right that only particles under acceleration radiate.

How an why do accelerating charges radiate electromagnetic radiation?

Suppose you have to slow down a car. Not having EM radiation you would be able to stop your care only by transferring your kinetic energy to another body, be this another massive body or a rotating disc for example. To our luck the loss of energy in every energy transfer happens at any case. So for a why question the answer has to be because nature works this way. The better questions are how something happens. The answer how would be an explanation on a more detailed level (including new hows) as the observation level.

I started with the statement that an electron has a magnetic dipole moment. Coming into an external magnetic field the electrons magnetic field gets aligned to this external field. At the same time the photon emission happens. If we suppose that during the alignment process the radiation of the photon happens, this will disbalance the alignment again And - because the photon has a momentum - the electron gets pushed against the direction of the photon emission which is in accordance with the observation radially outwards directed.

Now we have an effective chain: alignment - photon emissio - deflection - again alignement - ... By this the electron lose kinetic energy and moves in a spiral path until it stops. In detail the spiral path is a path of tangerine slices.

Accelerating charges don't have to radiate. Look at an electron at rest on the earth (or constantly accelerating for a long time). It will not radiate. The radiation acceleration formula such as Lamor's only hold for particles with changing acceleration - like a sinusoidal movement.

See for instance Feynman: From http://www.mathpages.com/home/kmath528/kmath528.htm

For example, in Feynman's "Lectures on Gravitation" he says "we have inherited a prejudice that an accelerating charge should radiate", and then he goes on to argue that the usual formula giving the power radiated by an accelerating charge as proportional to the square of the acceleration "has led us astray" because it applies only to cyclic or bounded motions.

The second problem is quite tough. J. D. Jackson comments, in the introductory remarks of his chapter on 'Radiation Damping, Classical Models of Charged Particles', that we know how to solve classical electrodynamics problems in two ideal conditions - a) given charge and current densities, how to compute the fields and b) given the fields, how to find the motion of charged particles in their presence. When charged particles accelerate, they do produce radiation which in turn affects the motion of all other charged particles. However, that problem is, Jackson says, still unsolved.

Coming to the first problem, if you calculate $\vec{E}$ and $\vec{B}$ for a moving charged particle, you will see that they depend on the acceleration $\vec{a}$ of the charged particle. Now calculate the Poynting vector $\vec{S}$. You will observe that $\vec{S}$, depends on acceleration but not velocity. Integrating it to get power radiated gives the famous Larmor formula. You may want to refer to Griffiths' chapter on 'Electromagnetic Radiation'.

10
Why doesn't a charged particle radiate energy in circular motion in a uniform magnetic field?
188
How do moving charges produce magnetic fields?
4
Why particles don't lose mass when they radiate
4
Does a non-relativistic treatment of a moving charged particle violate conservation of energy?
0
When electromagnetic radiation does work, does its amplitude decrease?
26
How is the energy loss by an accelerating charge expressed in the equations of motion?
3
Do accelerated moving electrons radiate electromagnetic energy?
1
Manner of energy exchange between an accelerating charge and the fields it produce