What allows the modified Urca process to work at lower density than direct Urca in neutron star cooling?

The dominant method of neutron star cooling is neutrino emission. There are two regimes usually presented, the "direct Urca" and "modified Urca" processes, each of which are sequences of neutron decay and inverse reactions. The direct Urca looks like this: $$n\rightarrow p+l+\overline{\nu_l},\quad p + l \rightarrow n + \nu_l$$ where $l$ is a lepton - either an electron or a muon. These processes cause continuous emission of neutrinos which cools a neutron star relatively quickly.

But below a density of $\rho\approx 10^{15}\mathrm{\,g\,cm^{-3}}$ (about three times the nuclear density) this process is suppressed, which means that the direct Urca process only occurs in the core. This is the reason according to a review of neutron star cooling from Pethick and Yakovlev (2004):

The process can occur only if the proton concentration is sufficiently high. The reason for this is that, in degenerate matter, only particles with energies within ~$k_BT$ of the Fermi surface can participate in reactions, since other processes are blocked by the Pauli exclusion principle. If the proton and electron Fermi momenta are too small compared with the neutron Fermi momenta, the process is forbidden because it is impossible to satisfy conservation of momentum. Under typical conditions one finds that the ratio of the number density of protons to that of nucleons must exceed about 0.1 for the process to be allowed.

This makes some sense. But what surprises me is that this process can still work with a slight modification at lower densities. The modified Urca process can cool the star $$n+N\rightarrow p+N+l+\overline{\nu_l},\quad p + N + l \rightarrow n + N + \nu_l$$ where $N$ is a nucleon - a proton or a neutron.

This process, I'm told, can work at much lower densities, but produces 7 orders of magnitude less emissivity. As a result, it's the dominant process in the superfluid outer core.

My question is why does the additional nucleon permit lower densities? How does an additional neutron or proton get us out of the conservation of momentum problem with the direct Urca process?

In an $n,p,e$ gas the ratio of neutrons to protons decreases with density. For ideal degenerate gases, the Fermi energies are related by $E_{F,n} = E_{F,p} + E_{F,e}$. In this situation, the largest the proton to neutron ratio can become is 1/8 when all the particles are ultra-relativistic at infinite density.

But I previously showed that $n_p < n_n /8$, hence in completely degenerate, ideal $n,p,e$ gases, the direct URCA process is blocked.

At densities above about $8\times 10^{17}$ kg/m$^3$, the Fermi energy of the electrons equals the rest-mass energy of muons (105 MeV) and muons can be produced. In more realistic models that include nucleon interactions, this occurs at about $3\times 10^{17}$ kg/m$^3$. The charge neutrality equation changes and the net result is that the number of protons in the gas is able to increase slightly - it could get above 10% of the neutron numbers, or even higher if negatively charged Hyperons are produced at even higher densities. This opens up a channel for the direct URCA process to occur.

The image below (taken from a thesis by Stephen Portillo) illustrates the proton (gold), electron (purple) and muon (blue) fractions as a function of baryonic density (in units of the nuclear saturation density $2.8\times10^{17}$ kg/m$^3$). This has been calculated incorporating nucleon interactions. The muons appear at about the saturation density and the proton fraction exceeds 1/8 at about $10^{18}$ kg/m$^3$. 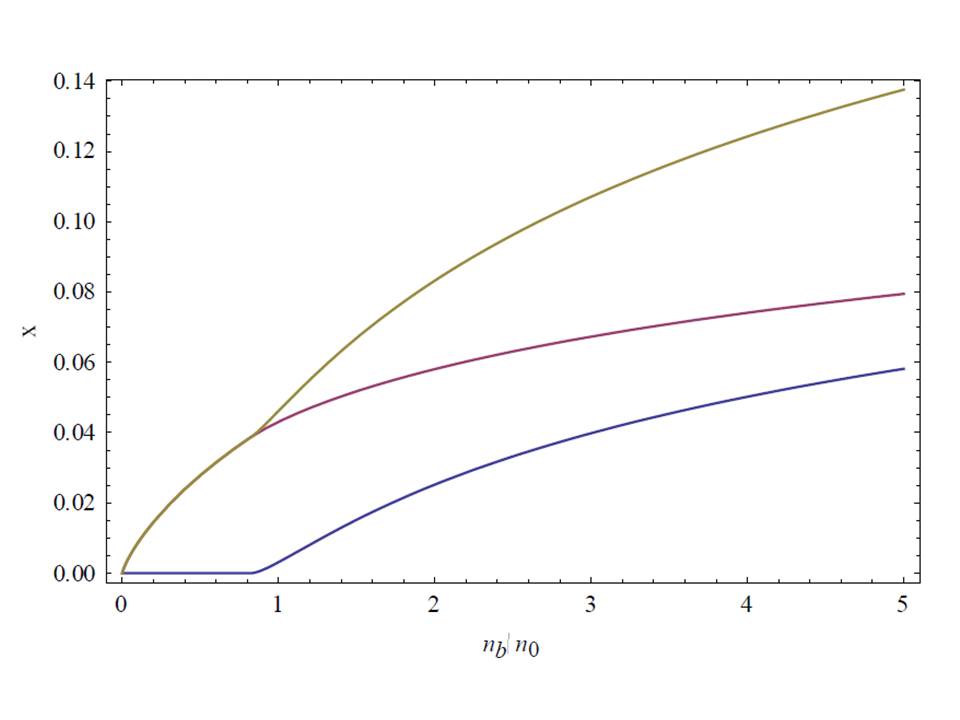 These reactions must involve neutrons, protons and electrons that are close to their Fermi energies (within about $kT$). Therefore this requirement on each species introduces an extra dependence of $\sim kT/E_F \ll 1$ per species into the reaction rate.

In the modified URCA process "bystander particles" are available to balance the momentum and energy equations - i.e. their role is just to provide sources/sinks of energy/momentum. However, the requirement for two more bystander nucleons (also within $kT$ of their Fermi energies) suppresses the reaction rate considerably (two more factors of $kT/E_F$ or about $10^6$ at typical densities). So, even though the modified process dominates over suppressed direct URCA at low densities, if densities are high enough for direct URCA to be possible, it dominates.

In the direct Urca process, there is only one reactant, so the center of mass frame for the reaction must necessarily have total energy equal to the rest mass of the nucleon. The modified Urca process has total energy as a free parameter, so I would not expect it to be nearly as suppressed.

I think it's not the density per se that suppresses the direct process, but rather the rarity of protons at densities much beyond the neutron drip. Since they would be so sparse, their Fermi energy would be much lower than the neutrons', and that's where the conservation of momentum trouble arises.

I do some neutron star research, but I have never dealt much with the microphysics like this, so this is slightly conjectural on my part. I know the nuclear guys that supply data for the big-time simulators, like at Los Alamos, for instance, have hundreds if not thousands of reactions in their reaction matrices, so trying to pin down exactly what accounts for what is a little like identifying which particular note of which instrument in a symphony makes it a "masterpiece."

I am not an expert on this, but the two cases indicate a change of phase. The process $$ n~\rightarrow~ p+l+\overline{\nu_l},\quad p + l \rightarrow n + \nu_l $$ might be thought of as two steps in a process where a neutron in a high energy state in the Fermi surface, we denote by $n^*$ falls to a low energy by $n^*~\rightarrow~n~+~\nu~+~\bar\nu$. For a lower mass density $<~10^{15}g/cm^3$ the neutron state, which is a form of liquid as I understand, changes to the cooler phase with nuclear matter. Using the shorter notion above a neutron scatters off a nucleus, so the $n^*$ neutron scatters off a nucleus $N$ so $$ n^*~+~N~\rightarrow~n~+~N~+~\nu~+~\bar\nu $$ This process however competes for the process $n^*~+~N~\rightarrow~N’$ which is an isotope of the $N$. This is a nuclear interaction which is strong than weak interactions, and by that fact probably dominates the neutrino emitting process governed by weak interaction.

Not the answer you're looking for? Browse other questions tagged particle-physics neutron-stars or ask your own question.

10
What allows the modified Urca process to work at lower density than direct Urca in neutron star cooling?
29
What stabilizes neutrons against beta decay in a neutron star?
9
How big of a neutron star would be needed to form a quark star inside of it?
3
Can neutrons be synthesized purely from protons and electrons?
1
Can a perfect insulator, i.e. matter devoid of all electrons conduct electricity?
1
Difference between Urca process and $\beta$-decay in neutron stars cooling

4
Physics in high lepton chemical potential
1
Difference between Urca process and $\beta$-decay in neutron stars cooling
33
What is the theoretical lower mass limit for a gravitationally stable neutron star?
1
What is the pressure and density of a neutron star?
0
Is the R-process the only mechanism for making heavy elements in a neutron star merger?
1
Non-Comulative nature of Mass-Radius curves of Neutron Stars