Let us consider this picture. 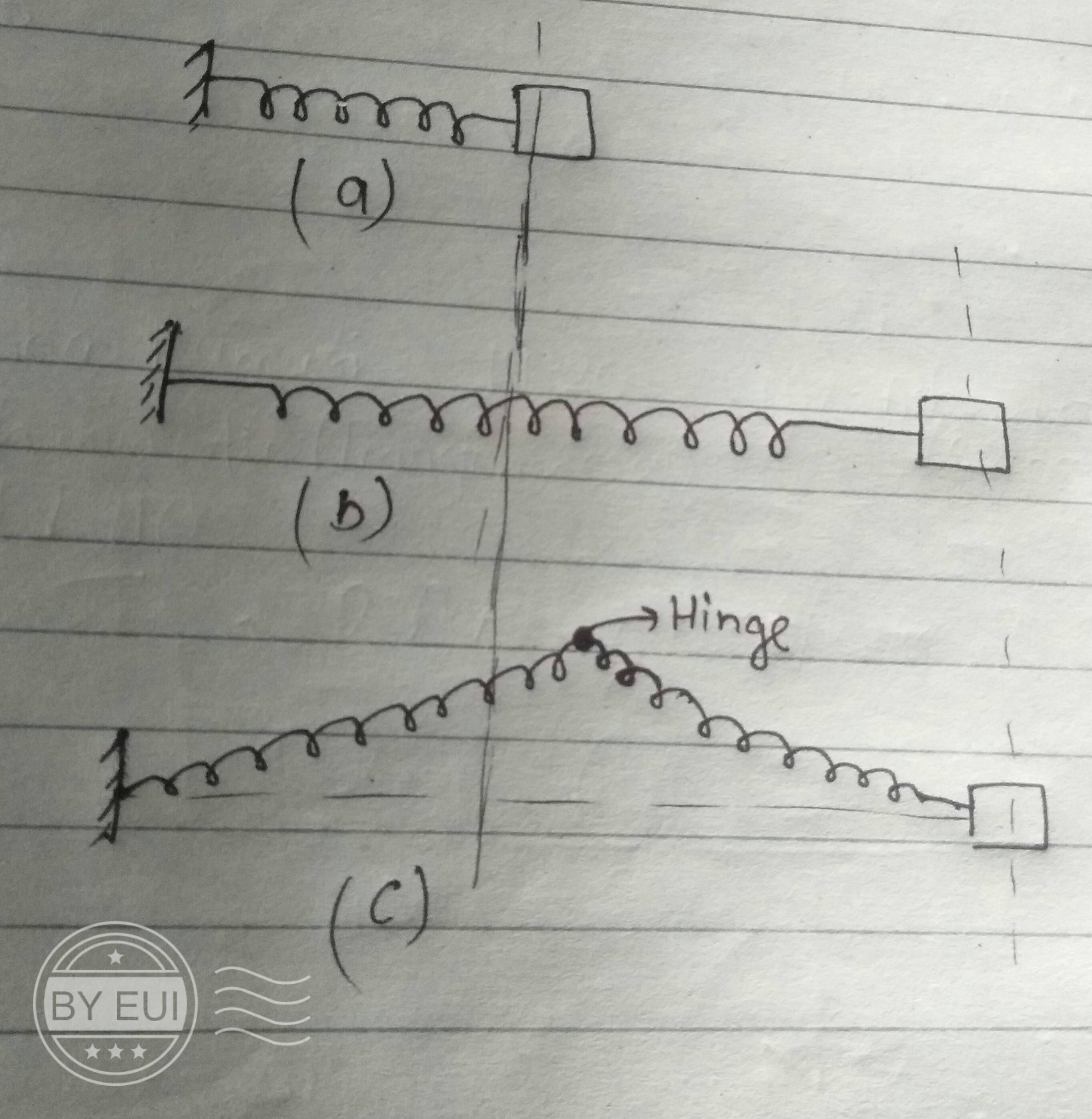 $\Rightarrow$ The first picture shows the initial position of the block when the spring is in its natural length and is kept on a smooth horizontal table.

$\Rightarrow$ The second figure corresponds to the situation in which the block is pulled straight on the smooth horizontal table from its natural length (indicated by the first dashed line).

$\Rightarrow$ The third figure corresponds to the situation in which the spring is first pulled and is then turned around a hinged nail and is then brought to the same final position as it is in the second figure (indicated by the second dashed line).

The block is moved on the horizontal table only and is not pulled vertically in any of the figures.

So in picture (b) and (c) the initial and final positions of the block is same but I don't think the spring potential energy is equal in both the cases.

Can someone explain what is happening here? Where am I wrong?

Another way you can see the same effect is if you were to start with case (b), and then use a rod to stretch the spring upwards, until it is just as in (c). Intuitively you will have to put work into that spring, so the system must be gaining energy.

You have to remember that the energy is "stored" in the spring. The block doesn't have the potential energy. The energy of the third system isn't only dependent on the position of the block (or, more specifically, the right end of the spring). You had to do work to move the middle of the spring to the hinge. You need to take this energy into account as well.

I think that you are confused about what "independent of path" means. For conservative forces the work done between two STATES of the system is independent of path. We also can define a potential energy which is a function of the state of the system. In your case, elastic PE is a function of the state of the spring. This is the system with elastic PE. It is obvious that your (b) and (c) represent two distinct states of the spring so the work done going from (a) to (b) has no reason to be equal to the work done from (a) to (c). The path independence just refers to one pair of states. Not that going from an initial state to any other state you do the same work.

In the third case more generalized coordinates are required to specify the state of the system. I would use two additional coordinates identifying the position of the pin on the plane and then another to identify what part of the spring is pinned. However, it is certainly possible to use different coordinates if you like.

In this larger parameter space it is clear that the work done by the spring is independent of the path taken to get there. There is a potential energy that depends only on these generalized coordinates, and not the velocity nor the history. The force is conservative.

It is conservative, it depends on the path, although the dependence of the force with $x$ is different just because the configuration is different. in case (3) the horizontal force is $F=-kx\sqrt{H^2+x^2}/H$, if H is the height of the hinge and the string is always straight (we also assume that the mass does not move along $y$, also assumed was rest lenght=0).

Not the answer you're looking for? Browse other questions tagged newtonian-mechanics forces potential-energy spring conservative-field or ask your own question.

-1
Friction is also a conservative force?

0
Two blocks connected by spring on frictionless surface and Newton's third law
4
Where is the energy lost in a spring?
13
How much work can a force on a spring do? (Why are two methods wrong?)
1
Concept of work done by spring
4
In this problem, why is the work done by the spring not equal to the line integral of the spring force over its displacement?
0
Where is the fault in the mechanical energy conservation in a spring block system here?