I'm looking for the "a-ha" moment in trying to understand how the super-luminal apparent speeds of the universe inflation theory are allowed.

Specifically, the short explanation is that "the two objects are not in a causal reference frame to each other, and thus they can move faster than the speed of light/causality relative to each other." So far, so good!

At the beginning of the big bang, weren't all matter causally linked, and thus all in the same reference frame, though? So there would have been some point at which two collections of matter, previously causally linked, became unlinked?

What is the mechanism that allows causally linked reference frames (like two close galaxies) to suddenly un-link (and thus pass beyond the visible universe edge of each other?) Or am I thinking about this all wrong, and if so, how should I be thinking about this?

In general relativity the situation is completely different, since the global notion of a reference frame doesn't exist. Only at a single point can you compare the velocities of observers passing through that point and have a notion of frames of reference. So talking of separated observers as being in the same reference frame in GR doesn't make sense. The notion of "casually linked" points remains more or less the same however, just now the connecting causal path is on curved spacetime. The "unlinking", as you call it, is just two observers originally having a causal curve between them and then not, which can occur for accelerated expansion. You can see this in the figure below, which shows the FLRW spacetime sliced into spacelike hypersurfaces on which the so-called co-moving coordinates are defined by the intersections of timelike geodesics. If the expansion accelerates at a large enough rate, then two observers at fixed comoving coordinates will eventually no longer have a causal curve connecting them (you can imagine the causal curves as curves whose tangents make angle of $\leq 45$ degrees to the geodesics). 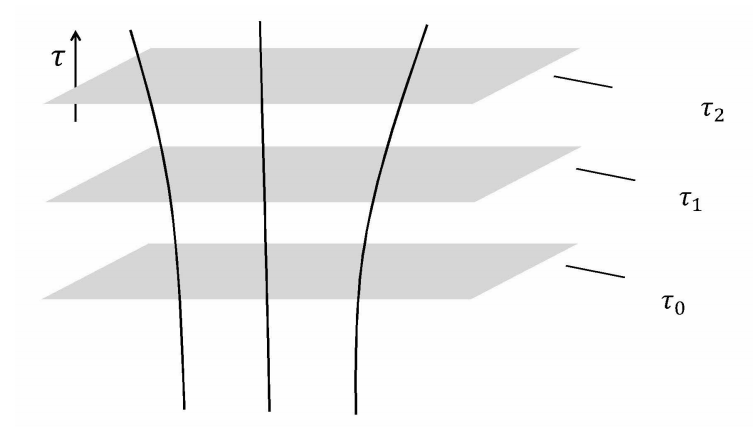 If you want a very crude intuitive picture, think of somebody accelerating in a car away from you and you (representing a light signal) are trying to run after them. As soon as they pick up enough speed you will never be able to catch them and so there is no "causal" link between your starting point and the car. But it's not like there's any explicit "mechanism" that causes this to happen.

As for this question:

At the beginning of the big bang, weren't all matter causally linked ...

This may be the intuitive expectation, however for an FLRW model, if the spacetime expands sufficiently quickly it need not be the case and particle horizons will be present from the moment of the Big Bang. Wald (1984) Sec 5.3b goes through this and I've included a passage from it here:

This demonstration is most easily made in the case of flat spatial geometry, $$ds^2=-d\tau^2+a^2(\tau)(dx^2+dy^2+dz^2)\tag*{(5.3.10)}$$ and we will focus our attention on that case. By making the coordinate transformation $\tau\rightarrow t$ defined by $$t=\int\frac{d\tau}{a(\tau)}\tag*{(5.3.11)}$$ we can reexpress the metric, equation (5.3.10), as $$ds^2=a^2(t)(-dt^2+dx^2+dy^2+dz^2)\tag*{(5.3.12)}$$ Written in this form, it becomes manifest that this metric is merely a multiple of the metric of the flat Minkowski spacetime metric. Such a metric is called conformally flat. The relevance of this remark arises from the fact that a vector will be timelike, null, or spacelike in the metric of equation (5.3.12) if and only if it has the same property with respect to the flat metric $$ds^2=-dt^2+dx^2+dy^2+dz^2\tag*{(5.3.13)}$$ Thus, it is possible to send a signal between two events (i.e., join the two events by a timelike or null curve) in the metric of equation (5.3.12) if and only if this can be done in the flat metric, equation (5.3.13). With this in mind, it is not difficult to see that an observer at an event $P$ will be able to receive a signal from all other isotropic observers if and only if the integral, equation (5.3.11), which defines $t$, diverges as one approaches the big bang singularity, $\tau\rightarrow$ $0$. Namely, if this integral diverges --- which will be the case if $a(\tau)\leq\alpha\tau$ for some constant $\alpha$ as $\tau\rightarrow$ $0$ --- then the Robertson-Walker model will be conformally related to all of Minkowski spacetime (i.e., $t$ will range down to $-\infty$) and thus there will be no particle horizon. On the other hand, if the integral converges, the Robertson-Walker model will be conformally related only to the portion of Minkowski spacetime above a $t=\text{constant}$ surface, and particle horizons will exist, as illustrated in Figure 5.6. 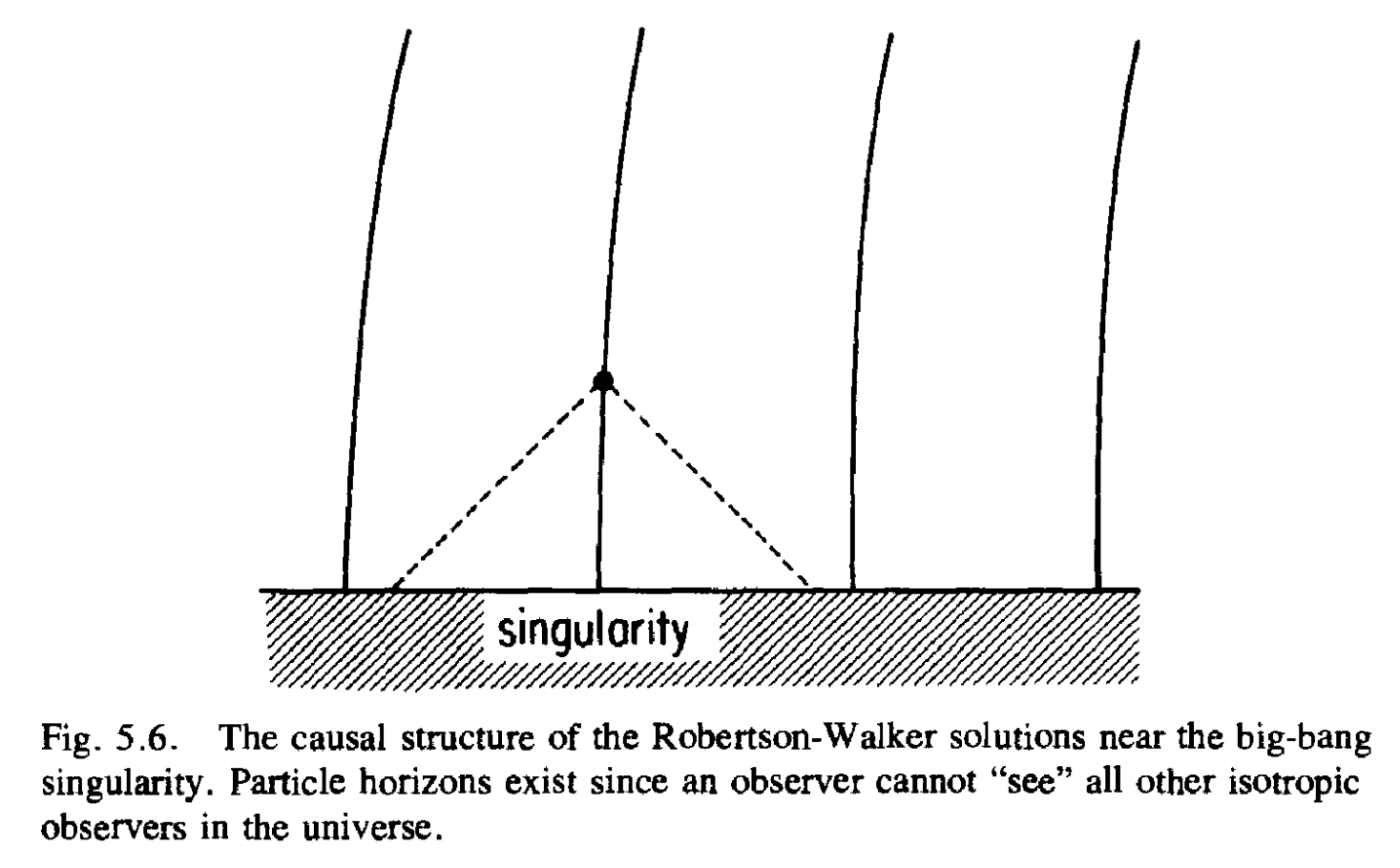 Even in the case of pure dust, we have $a(\tau)\propto\tau^{2/3}$ so the integral converges and particle horizons are present.

Not the answer you're looking for? Browse other questions tagged cosmology space-expansion faster-than-light causality cosmological-inflation or ask your own question.

10
Will acceleration rate of expansion of space become faster than speed of light?
3
Does cosmic expansion imply the possibility of the universe splitting in half; multiple big-crunches?
3
Is the cosmological horizon expanding faster than space itself?
1
Is there a general definition of a causal horizon?
1
What is the limiting factor of the speed of light?
5
CMB homogeneity: Inflation vs. common initial conditions?
0
Is cosmic inflation slow rather than fast
0
Horizon Problem: How did different regions of space acquire different temperatures?
0
Why don't galaxies have larger peculiar velocities?