Does Pythagoras theorem hold for length contraction according to Special relativity?

Here is a thought experiment.

Consider a frame S in which an observer is at rest and she looks ahead to find a right angle triangle of sides 3 (x-axis),4(y-axis) and hypotenuse 5. Now consider another frame S' in which is moving at a speed 'v' moving along x-axis, with respect to frame S, that has another observer.

Will the observer in the frame S' be able to accurately deduce the Pythagoras theorem or will length contraction along the x-axis lead to some other x-axis length for the triangle?

If you draw a right triangle on a sheet of rubber, and you uniformly stretch the rubber in a direction aligned with one of the non-hypotenuse sides...you still have a right triangle. However, the angle has changed. Do you suppose there could be any parallels with your thought experiment?

I have made a diagram to clarify the situation

black is for the $S$ coordinate system

In fact they will also both know what each other sees by using the Length Contraction formulas.

I hope that helps clarify your question. 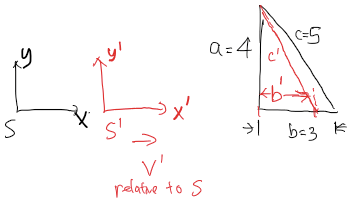 As an alternative to the other answers, you could just use the principle of relativity rather than any explicit form of the Lorentz transformation (which is deduced from it): this says that the laws of physics can be formulated in a way that is the same in all inertial frames.

This implies that there is no experiment that would tell you your state of (uniform) motion, in particular if the Pythagorean theorem holds in one frame, it holds in all frames.

Your thought experiment needs to start with a more basic questions: "What is a straight line?" and "What is a right angle?" and "How to measure distance?"

If we are doing real physics experiment, and we say use a beam of laser as a "straight line" and an atomic clock to measure the time of transit between points thus measuring distance, and a mirror to reflect laser in a right angle. And you put the whole setup in a spacecraft traveling at near light speed.

However if the spacecraft fly next to a black hole, the space is not Cartesian, thus Pythagoras Theorem does not hold. (Same applies to accelerating frame.)

Not the answer you're looking for? Browse other questions tagged special-relativity metric-tensor inertial-frames geometry or ask your own question.