Questions about the Jeans length

I have a couple of questions about the Jeans length. Suppose the universe has a homogeneous energy density, except there's a spherical region that is overdense.

Not really my field, but I'll take a crack at it.

I understand that if the region is smaller than the Jeans length, then pressure, which travels at the speed of sound (compared to the speed of gravity c), can build up fast enough to counteract the gravitational collapse. But if the region is bigger than the Jeans length, it collapses. What exactly does it mean? Does the region get smaller and smaller until it vanishes? Wouldn't this create a black hole, since you're stuffing all the energy of the overdense region into a smaller and smaller place?

Notice that the expression for the Jean's length $$ \lambda = \sqrt{\frac{k_B T r^3}{G M \mu}}$$ depends on both the size of the region in containing the mass and temperature of the cloud.

It should be obvious that the if a region of the cloud is contracting then $r$ gets smaller while $M$ remains the same. You need one more fact: gravitational potential energy is being converted into thermal energ (i.e. largely the kinetic energy of the particles, see also the Virial Theorem).

The wikipedia article takes it up from there "It is only when thermal energy is not equal to gravitational work that the cloud either expands and cools or contracts and warms, a process that continues until equilibrium is reached."

Notice *"until equilibrium is reached"**.

Or, if the region is collapsing, wouldn't it eventually be smaller than the Jeans length, at which point it stops collapsing?

You've asked about the case from the wikipedia quote above where it contracts and warms. That said, if it gets warm enough it will lose energy relative it's surroundings by radiation, which means $T$ will drop and the cloud will again contract and warm. This continues until either the cloud stops behaving like a gas or the onset of fusion provides some new energy to keep the temperature up.

And what happens if the region is underdense, rather than overdense?

This is the case addressed above where it expands and cools.

The answer asks for a solution that must encompass a much larger spatial region then the overdense/underdense region of interest. I think that you are aware of the usual answers focused in the overdense situation and I will focus mainly in the underdense case.

The underdense case: in the fig A below we have an intuitive description: in In an isodence world (top image on A) each and all of the particles stay immobile because each particle is equally balanced by forces from the top and from the bottom, from the right and from the left. In the other two small images on A is shown that matter will migrate away of the underdense region (hole). A shell of overdense material will form in the outer region of the hole and that shell will have an accelerated motion to the outside region (equations in the images E and F) making the void larger and larger as time goes by. This phenomenon is the origin of the large voids we see in the universe.
Even if you start with temperature 0ºK in a rarefied gas, as it corresponds to the mean density of the universe, the overall temp will increase as time goes by showing that the 2nd thermodynamic law can not be used under the presence of gravity.
Equations:
Racionale in Fig B and the equations of the acceleration fields in figs C and D: the gradient of the field of an isodense, infinite or large enough region, has a constant null value everywhere, here represented by a uniform green, and is equal to the superposition of the field of a hole (equation of the acceleration represented in the fig C) with the field of a uniform sphere (acceleration represented in fig D). The two equations sum 0 for any $d$ (distance to the centre of the sphere of radius $R$ ).
So, in the figure C is represented the acceleration felt by a test mass in the underdense situation. As it is always negative the force will move the test mass away of the centre. In the fig D is represented the usual situation of an overdense uniform region and the acceleration is always positive forcing any test mass in the outside to be attracted to the centre.

--
I gave a similar answer in PSE and got downvoted, but I'm used to it. I will specify better the constraints of the problem: The usual $\frac{1}{r^2}$ Newtonian force is used and is good to this problem because we dont need strong fields neither relativistic speeds. Any interaction between masses is not instantaneous at a distance but it is mediated by the speed of light. The argumentation goes as (Ron answer there) 'in an infinite universe in Newtonian gravity the stability is compromised'. Then I say that the masses are present in the universe since a limited amount of time and therefore it is unphysical to mention an infinite universe because the interaction is mediated by the speed of light/gravity and it is sufficient to consider an enough large spherical region around the underdense region. Some years ago I did a computer simulation of this case and I took rightly in consideration a large enough region and saw the migration of the masses to the outside (I remember I've used the principle of superposition to fake an infinite universe).
note: in this video (or soundtrack) after minute 7 they say exactlly the same as I say here (without the eqations) Stephen Hawking: The Story of Everything pt 2/9 . In a recent paper about the voids structure and dynamics there was a mention like this 'as seen from the inside of the void a space expansion is apparent'.

The overdense case:
It is represented by the superposition of a background isodense field plus the field of an uniform sphere. Suppose that we start with temp 0ºK and low density as in the other case we can think that ... the 2nd thermodynamic law applies and the kinetic energy will be slowly transfered to the outter atoms. So, the temp will raise and afterwards will return to 0º.

The situation in other conditions I will leave to other's answers. 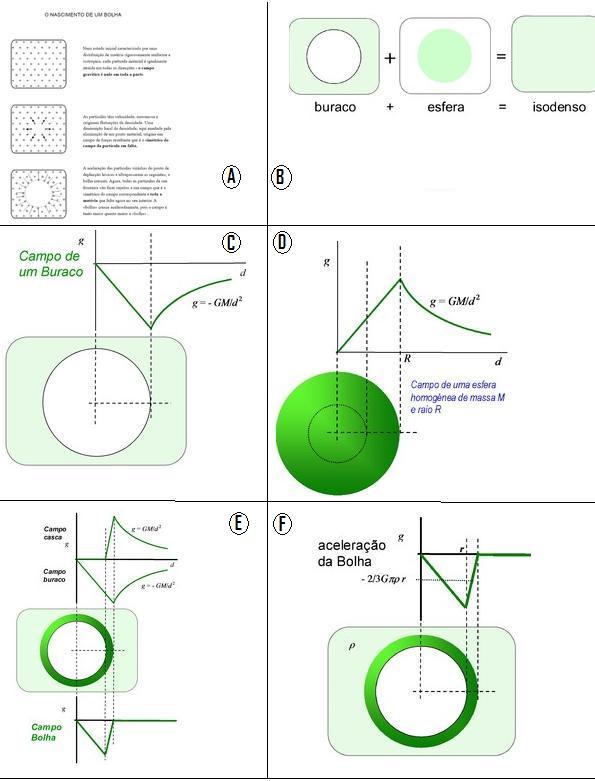 EDIT ADD :
in a comment It is found: "Isodense matter does not make a null g."

Let's explain. $g$ is an acceleration that shows how a test mass will react in the presence of the field. With a null $g$ the particle do not know where to move neither how fast is the rate of grow of it's velocity.

In a isodense universe there are no features at all, not a single point upon which one can anchor some preferred direction. In contraposition imagine that we can anchor a line at Earth and Sun centres, and we have a clearly defined coordinate. That is the case of a non isodense situation.

Returning to the isodense case. Any plane defined on it has no different properties from any other plane, idem of any line on any plane.
This means that we can choose any line to study the one-dimensional, any plane to ... any 3D boxes with equal length sides are equal one to the others. So let see what happens with the 1D case : define a point, any, as origin (X=0) and mark distances positive and negative in opposite directions. At any absolute distance X, from 0 to the event horizon, (not infinite ok?) we have a contribution of a net force = 0 at the point X=0 : the $dm$ at $X$ will contribute with $F(X)$ and the $dm$ at $-X$ will contribute with $-F(X)$. Provided that the interaction propagates with the same speed in any direction.

Because the result is the same (net force=0) with any choosed origin any integral has always a definite 0 value.

In a more sensible way. If $g$ was different from 0 in the isodense universe, as stated in the comment, then a test particle with 0 initial speed will have to start to move. BUT what direction will it take ? The only solution is the particle has a 'motu proprio'.

Not the answer you're looking for? Browse other questions tagged gravity cosmology universe gravitational-collapse or ask your own question.