When is diffraction most pronounced?

My notes says the following things about diffraction:

The larger the ratio of wavelength to slit (or object) width, the more pronounced the diffraction is and the more spread out the wave energy is. Diffraction is most obvious when the wavelength and the dimensions of the obstacle/space are the same order of magnitude (approximately equal in size).

When you are talking about light and common day experiences the size of most apertures, $d$, are much, much larger than the wavelength of light. $\lambda$ which in turn means that $\lambda$ /$d$ is very, very small.
As this quotient gets bigger and approaches $1$ diffraction becomes more pronounced.

You could define the amount of diffraction by comparing the intensity of the diffracted light, ie the light that has changed direction as a result of passing through an aperture, as compared with the intensity of all the light which passes through the aperture.

Using this definition, when $\lambda \approx d$ almost all the incident light is diffracted.

Note that you can still observe diffraction if $d\gg\lambda$ as with the diffraction due to an edge but it can be more difficult to observe.

Here is an example of diffraction due to the edges of a razor blade. 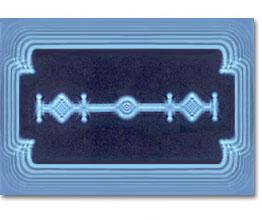 Scalar theories of diffraction, those that are used most often, are not valid when the size of the aperture is of the order of the wavelength. The vectorial character of the electromagnetic field as well as the nature of the diffracting material should be taken into account.

So, most often, we speak of diffraction with openings significantly larger than the wavelength. But that doesn't mean the effect is negligible.

If you take an aperture of width $a$ illuminated in parallel light, the diffraction angle $λ/a$ may be small but the size of the diffraction figure on a screen at distance $D$ is $λD/a$ : it grows with $D$.

At the same time, the size of the projected shadow, predicted by geometric optics, is $a$.

This criterion is clearly less severe than the condition $a≪λ$ which is sometimes given!

In your notes 'pronounced' and 'obvious' could be referring to different things.

When $d$ is small the diffraction (amount of bending) is high and the spacing between maxima of the diffraction pattern becomes greater, so in that sense the maxima are easier to resolve if $\frac{\lambda}{d}$ is high.

If $d$ were very small however, the amount of light passing through the slit is low and it's spread over a wider region, so the pattern becomes dim, so in that sense is not so 'obvious' (easy to see).

Not the answer you're looking for? Browse other questions tagged optics waves diffraction wavelength or ask your own question.

1
Why should the edge of the aperture have size comparable to the wavelength of light for diffraction to occur through that aperture?