Case 1: Two strings are pulled with the same $u$ velocity. The box will also move with velocity $u$. 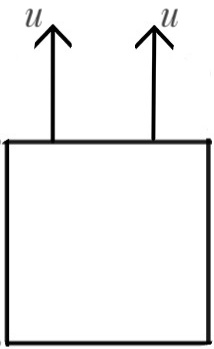 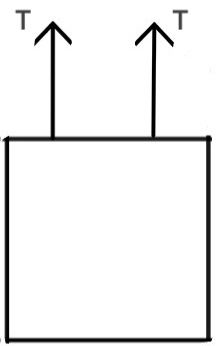 I think my problem is obvious. Both velocity and force are vectors. But why we can not get the velocity of the box in the first case as $u+u=2u$? (This is obviously wrong, but why?)

Let's focus on your observation that

Both velocity and force are vectors.

True. Both are vectors, and an intrinsic characterization of vectors is that there is a sum of vectors. However, although the vector addition is a well definite mathematical concept (in essence, the parallelogram rule), the application of vectors in physics cannot avoid the additional step of carefully identifying the physical meaning of the sum.

When we identify the physical entity force with vectors, we implicitly or explicitly have to provide an operative meaning of all the vector operations (sum and multiplication by a scalar). In classical mechanics, if we identify the presence of a force ${\bf F}$ by the resulting acceleration of a test particle, the sum of two forces applied to the same particle and product of a force by a scalar, are directly related to the corresponding addition of accelerations and multiplication of acceleration by a scalar.

Notice that an important ingredient of the force addition concept is adding only forces applied to the same body. Missing that, we would go into trouble if we try to sum an action-reaction pair of forces. In a more mathematical flavor, we could say that forces on different bodies are in different vector spaces and therefore cannot be summed.

To summarize, what can or cannot be done when summing entities called velocities or forces depends on the physical meaning we give to the mathematical concepts. It is not enough to have vector quantities to sum them without analyzing what kind of vectors are.

Let's now come to the example. Forces on the same body can be summed and this would result in an acceleration which is the sum of the accelerations present if only one of the forces at a time were present. Summing velocities of two different points of the same rigid body is meaningless because the body (the box) position is identified by one point only.

Tension along a string is $T$. Therefore total force acting on the box is $T+T=2T$.(Box is accelerating)

In this case, you are applying two forces to the box, and so they add to give you a resultant force. The first case doesn't really make sense physically, but the second case does.

Both velocity and force are vectors

In your first example, you cannot add different velocities at different points on the same body since its velocity is defined by the translational motion of one point (usually the center) of the body (assuming the body is rigid).

The second example with forces works fine since the net force on an object is the vector sum of all forces acting on it, as you have done.

You are walking down the street with your friend. Now you hold hands. Are you now moving twice as fast?

If addition of velocity worked like that, you would get total nonsense. Whenever two moving objects would stick to each other, they would move faster.

This is an insightful question.

In classical mechanics, there are two classes of vector quantities, each with some common properties. The nomenclature below isn't standardized, as different authors have used different names for the same concepts below.

Now for the vector algebra part of the question. How do we add two forces or two velocities and how does this process differ. 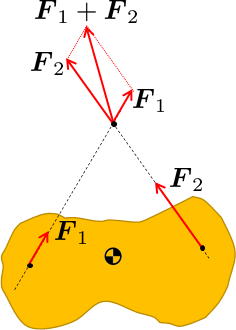 The result is the vector addition of the axis vectors (Forces) and the moment vectors (Torques) component by component.

The geometry of this situation leads to the relative centre of rotation theorem.

It is worth reading the following article from 1901

Additionally, read this answer here about the nature of torque and the moment vectors that are defined using the cross product.

Sorry for my poor english. French is my native language.

On the other hand, there are difficulties in defining the derivative of the velocity : we compare vectors at different points. To be able to do this, we have to define a parallel transport and connection that allows a vector to be transported from one point to another. It is very easy in the case of the affine space of classical physics. More complicated in a variety: it is necessary to introduce a covariant derivative.

So even the addition of two forces at different points is not a simple consequence of the structure of vector space. We have to transport the vectors. And this is only simple for an affine flat space.

The fact that velocity and force are vectors is only secondary here. The true distinction here is whether the quantities in question are intensive or extensive, that is, how they scale with the size of the system.

In case (1) constant velocity means the acceleration is zero. In the absence of gravity, there is no net force. Only relative velocities add.

Not the answer you're looking for? Browse other questions tagged newtonian-mechanics forces vectors velocity string or ask your own question.

40
Is torque as fundamental a concept as force?
2
Why do these two methods give different answers?
1
Does velocity add like vectors?
0
Do accelerations add the same way velocities add in non-relativistic mechanics?

0
What is the direction of Tension Force in a rope pulled at its two ends with equal forces?
0
When calculating centripetal force, do we ignore non-radial or tangential forces
4
Tension in a massless string being pulled at its ends with unequal forces
2
Is my understanding of how a force is applied through a string correct?
0
Can we resolve tension force into components for net force?