Two masses $m_1$ and $m_2$ are connected through a weighty, uniform and an unstretchable rope of length $L$. The surface is frictionless. Masses of the objects are $m_1=m$, $m_2=\frac{2}{3}m$, mass of the rope is $m_r=\frac{1}{3}m$. At which length $x_1$ of the vertical part of the rope, the tension forces exerted by the rope on the bodies would be equal? What acceleration does the system have? What is the type of the acceleration (increasing/decreasing). 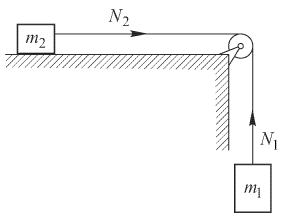 I had no particular problems with this question, however, the book wrote the first second law applied to the rope as:

What I got is a bit different:

In this particular question, the signs of the tension forces aren't important, as we have to calculate the acceleration when both of them are of the same magnitude, and thus cancel each other out ($N_1=N_2=N$), but I want to know, how it should really look like.

Also, I have a conceptual question - if we have a similar question, where the rope has some mass, and there's no information regarding the uniformity of the rope, can I assume that the rope is actually uniform (assuming all the other details are the same as in this question)? And what if the rope is non-uniform? What happens to the acceleration if the rope isn't uniform? Is it possible that the acceleration of such a system wouldn't be increasing nor decreasing, but rather be some arbitrary function (e.g. the acceleration may increase and decrease randomly)? And what if I have only a rope (no masses, no pulley), lying on such a frictionless surface, where part of it is hanging (vertical part) - will the hanging part always pull the horizontal one, and the whole rope will slide down? Will it just be the same equation as above, just without $N_1$ and $N_2$?

1
Acceleration of masses hanging from a system of two pulleys
9
Newton's second law: system with three blocks and a pulley
0
About a pulley, a rope, four masses and two springs: solvable or not?
6
Will "A" experience max static friction if "A" is connected to "B" which is on the verge of slipping?
0
Tension in strings which accelerate 3 masses
2
Tension in massless rope